LONDON, United Kingdom — Like many Chinese tech firms, Meituan Dianping offers its users a bit of everything — group buying deals, ride-hailing and hotel bookings to name just a few of over 200 product and service categories — but at the end of the day, it is best known as the country’s food delivery giant.

During China’s two-month-long lockdown, Meituan dipped its fingers into yet another pot: high-end beauty. In March, it announced it would begin delivering products from 68 Sephora stores in 16 cities. Meituan has been growing its non-food selection for over two years, but the Sephora deal — for which trials commenced late last year — marked its first foray into the premium beauty segment.

The company declined to provide performance data, though a representative from Meituan Instashopping (the arm of its business responsible for non-food deliveries) said that an increasing number of brands have expressed interest in partnering up since the outbreak. Meituan isn’t the only food delivery business dabbling in the beauty category and similar partnerships are being forged beyond China. But the Beijing-based company’s partnership with Sephora is a case that international brands should study.

Across the globe, Covid-19 has decimated retail foot traffic by keeping shoppers homebound. Online, it has become harder than ever for brands to stand out on crowded marketplaces like Amazon and Ulta, which haven’t been immune to shipping delays. For players lacking direct-to-consumer capabilities, linking up with the likes of Postmates, Deliveroo and Uber — companies better known for bringing users burritos and salads than moisturisers — appears to be one solution to declining sales.

Everybody Wants a Slice

Postmates, the on-demand delivery company widely known for dispatching restaurant food to homes across the US, already works with Kiehls, Le Labo, MAC and Diptyque in cities like Los Angeles and San Francisco. In March, it saw a 284 percent year-on-year increase in orders across skin, body, cosmetics and hair care. Last week, Postmates launched a limited-edition three-way partnership with Kylie Jenner’s skincare line Kylie Skin and LA’s Alfred Coffee. More fashion and beauty launches are in the pipeline, according to a spokesperson.

With fewer people booking rides, Uber has also entered the playing field. In May it launched Uber Direct, which taps into the ride-hailing and food delivery firm’s network of riders and drivers to move goods within supply chains and to customers’ front doors. Uber declined to comment on its plans for fashion and beauty partnerships. 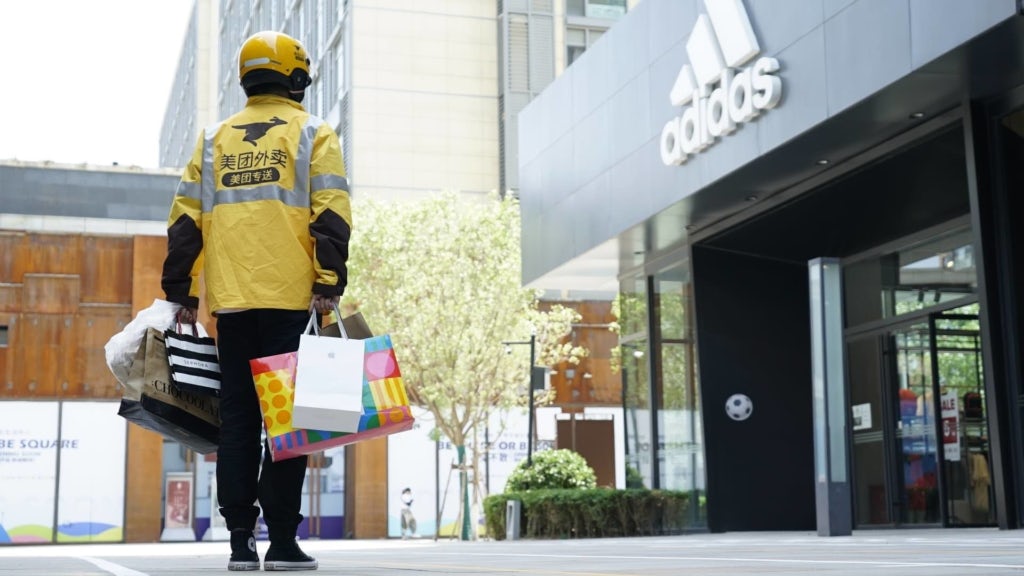 A Meituan delivery driver outside an Adidas store in China | Source: Courtesy

At present, Meituan — which last year saw its market cap exceed that of “China’s Google,” Baidu — is the exception, rather than the rule. “Meituan is one of the very few, if not the only, delivery-focused companies in the world that makes money,” said Wilhelm.

According to Ben Cavender, managing director of China Market Research Group, Meituan’s success (and therefore its ability to rapidly expand into new categories like premium beauty) is down to its scale and ubiquity, which allowed it to steadily increase its take rate, charge its partners a higher commission and collect a wealth of data. As of December 2019, the company operated across 2,800 cities and counties in the mainland, reaching over 450 million annual transacting users and 6.2 million merchants.

“[In New York], a similar model could conceivably work. But in other parts of the [US] there isn't enough population density to build order efficiency,” said Cavender. “In western Europe you have density in a greater number of cities, but maybe not enough population overall to justify the operational costs of this kind of business.”

This hasn’t stopped food delivery giants in the West from pivoting into new categories. Compared to food, beauty products boast higher margins and allow platforms to tap into their ready user bases. “[A platform will] have 100 million apps installed, credit cards on file, brand equity in consumer’s minds: all the stuff you want that you don’t have to start from zero on,” said Wilhelm. “In ten years... I’d be surprised if [Doordash is] still only delivering burritos.”

But even for tech giants with vast delivery networks, pivoting to fashion and beauty can be tricky. Returns are just one example of the logistics that firms will need to rethink. “Food returns don’t happen,” added Wilhelm. At worst, the wrong order is delivered and customers are reimbursed. “If you give me the wrong makeup and it’s worth $100, who’s going to pick it up, how is that going to work with the credit card processing?”

Covid-19 has accelerated a shift towards online shopping, which Bain & Company predicts will go from making up 12 percent of overall sales in 2019 to 30 percent by 2025.

“The industry is in crisis mode right now. Whatever [brands] need to do to string together a system for online ordering and fast delivery, they’re going to be clamouring for it,” said retail futurist Doug Stephens.

According to Cavender, Meituan offered Sephora an easy, omnichannel solution to customer engagement. Allowing customers to have digital orders fulfilled from nearby brick-and-mortar stores is not only fast but “makes it easier for Sephora to take advantage of its stores as mini distribution hubs, essentially broadening their reach.” The partnership enabled the brand to deliver products to most commercial areas within 30 minutes, according to the Sephora China team.

Whatever brands need to do to string together a system for online ordering and fast delivery, they’re going to be clamouring for it.

Sephora operates plenty of Chinese e-commerce channels besides Meituan, from its own website and app to a WeChat mini programme and flagship stores on Tmall and JD.com. But Meituan’s location-based model and integration with users’ daily lives serve a unique purpose, Sephora’s China team told BoF. “We consider it as more of a fulfilment play (last-mile delivery from nearby stores) rather than another e-commerce channel.”

As inventory-filled stores struggle to regain foot traffic, more businesses should reconsider shifting their physical retail spaces for the same purpose, which is where on-demand delivery options like Postmates would come in, said Stephens. “[This is] frankly something that should’ve happened a decade ago, but Covid-19 has really forced retailers now to make these modifications.”

In the long term, Stephens sees moves by Meituan, Postmates and Uber as part of a wider narrative around delivery.

Even after the crisis abates, McKinsey & Company forecasts that amped-up digital spending habits — which in some markets have spurred double and even triple digit boosts in online sales — are here to stay. Players like Amazon, which were already ramping up their delivery capabilities pre-pandemic, are clamouring for dominance of a rapidly growing market.

In the apparel sector — where brands often lack well-formed relationships or infrastructure for direct delivery — partnering with the likes of Postmates and Uber amid the current crisis might be a viable way to mitigate losses in the short term and perhaps even a strategy for the long-run.

Big brands like H&M and Zara risk leaving the door open to Amazon if they don’t amp up their delivery game, said Stephens. “Crisis or no crisis, we live in a world where consumers expect that anything they want can be on their doorstep within a day or two. If you’re not capable of doing that, you’re essentially marginalising your brand to the point of invisibility.”

However, brands shouldn’t expect partnering with an on-demand service to be a seamless fix-all. Alongside outlining a smart (and hygienic) system for parking and pick-ups, inventory could be a pain point. “You need to understand in a moment to moment basis what your inventory levels are in those stores, so you’re not making promises to customers and not fulfilling [them],” said Stephens. High-end brands have the added task of finding an on-brand solution.

“Could I see [companies and] brands like Kering, LVMH, Chanel, using Uber to deliver their products? Probably not.”

Why Beauty Brands Need to Step Up Their E-Commerce Game. Now.

How Successful Beauty Founders Are Managing the Crisis