The New Wave of Brands That Want to Make Acne Fun

Skincare targeted at banishing breakouts is getting a new lease of life, with a wave of upstarts taking aim at the giants in this $2.8 billion market.

The New Wave of Brands That Want to Make Acne Fun

Skincare targeted at banishing breakouts is getting a new lease of life, with a wave of upstarts taking aim at the giants in this $2.8 billion market.

LONDON, United Kingdom — Most skincare brands make products to hide breakouts and skin imperfections. But when model Charli Howard decided to start her own line, Squish Beauty, she wanted her zit-busting products to do the opposite: they were designed to be noticed.

Unlike traditional pimple patches, which work hard to appear invisible, Howard’s creations were flower-shaped, brightly coloured and bejewelled. One look at the brand’s Instagram tags proves fans of the spot stickers can’t wait to show them off to their followers.

Squish, which counts Bobbi Brown as an investor, partly takes its name from its cherry-shaped hydration cheek masks, and also sells lip gloss and moisturiser. But one year on from launch, its zit-busting face stickers remain the brand’s best seller.

Those over the age of 30 are forgiven for the concept being lost on them. But a growing number of young beauty consumers are being won over by upstarts like Squish Beauty, as a new wave of brands take aim at the acne industry’s more traditional players with cheeky branding and inclusive marketing.

To be sure, these new start-ups remain a niche, with the sector dominated by CPG giants like Johnson & Johnson, L’Oréal Group and Reckitt Benckiser Group, offering budget-friendly options widely available in drugstores and supermarkets. In the US, Johnson & Johnson has 43 percent marketshare of acne skincare products, according to Euromonitor data. Even among teens, Johnson & Johnson-owned Neutrogena consistently ranks as the favourite skincare brand, according to Piper Sandler. Clean & Clear, also in the J&J portfolio, also ranks high.

Yet this new lease of life has come at a time when the beauty sector is in flux thanks to the coronavirus pandemic. Research firm Euromonitor International expects the overall skincare market to grow at a compound annual growth rate of 4.2 percent over the next four years, much faster than colour cosmetics and fragrances, which are predicted to grow at 1.6 and 0.1 percent respectively over the same period, according to a May report.

Last year, $2.8 billion was spent on acne and blemish clearing skincare products worldwide, according to Euromonitor. Beauty retailers say the pandemic has accelerated interest in the acne and breakout category. Prolonged stress and mask-wearing has seen consumers suffering from “Quarantine skin” and “Maskne.” Cult Beauty has seen 139 percent year-on-year sales growth within its acne- and blemish-focused products.

“This growth has been happening before the pandemic,” said Alexia Inge, co-founder of the multi-brand beauty retailer. “It's consumer-led, the pandemic has just super charged it.”

Howard said her playful branding and Instagrammable product lines were inspired by a new attitude that was sweeping social media platforms like Instagram and TikTok, spearheaded by Gen-Z. 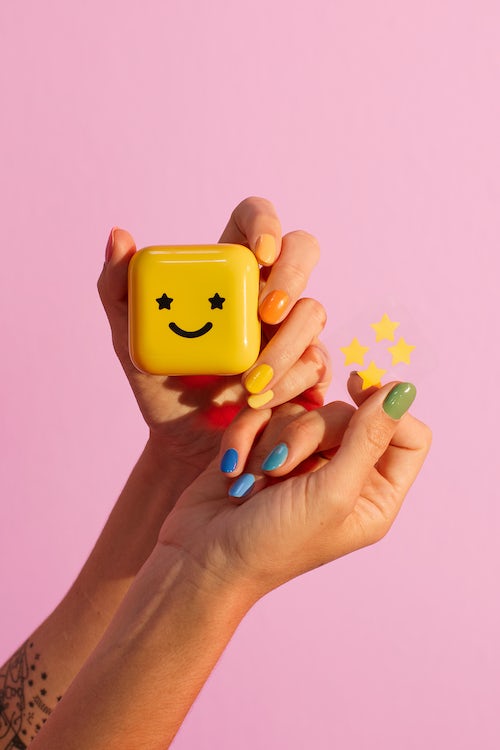 New York-based skincare start-up Starface, which sells star-shaped pimple stickers in a compact mirror case, is targeted at the same demo. The brand’s core customer is aged between 17 and 24, but also has a strong Millennial following, said brand co-founder Julie Schott.

“Our Gen-Z audience loves to wear hydro stars to school or online or as a decorative piece, whereas our Millennial customer often likes to wear them at night, at home,” she said.

Starface talks to its customers through its mascot character Big Yellow, identifiable by its starry eyes and broad smile. Instead of TV commercials and magazine ads, Starface is present where teens are these days: on their phones. The brand will text customers about new product launches and limited edition drops, like glow in the dark or metallic silver hydro-stars. Often, by the time a marketing email has been sent out, the drop has already sold out, said co-founder Brian Bordainick, noting that the text list is growing at a rate of 15 to 20 percent each month.

TikTok, the ultimate tool for reaching teens, was an early focus for the brand. Videos posted by influencers like Charli D’Amelio and Addison Rae garner millions of views each. A video of D’Amelio wearing hydro stickers posted in March has been watched by 38 million TikTokers.

Since launching in September 2019 with its signature Hydro-Star pimple stickers, the brand has also launched a cleanser and a moisturiser, both distinctive for their bright yellow packaging.

It’s not just the products themselves that are made to pop on social media. DTC Squish orders are designed to be an unboxing experience, shipped in colourful branded packaging containing reusable branded zippy bags and brightly coloured hair-bobbles.

Squish also sells merch, namely its gold name necklace. Skin and personal care brand Blume, which made headlines last year for its advertising campaign aiming to normalise conversations around acne, sells a range of merch including “Self Care Is the New Going Out” socks and “Moonchild” candles.

Older customers that have more cash to splash are fuelling growth of the latest beauty tech tools. Over the past few months, salon closures saw an uplift in at-home beauty during lockdowns. At Cult Beauty, this translated to booming sales of expensive gadgets to facilitate at-home treatments like micro-needling and light therapy. Particularly popular is Dr. Dennis Gross Skincare, whose light therapy mask will set consumers back £430, yet promises to stimulate collagen production, destroy acne bacteria, and prevent future breakouts.

“It’s been such a struggle to get hold of stock for that,” Inge said. “That was a big surprise. We were a little bit tentative when bringing it on because it was so expensive. But people really are willing to spend if it's the right product.”

Editor’s Note: Starface founder Brian Bordainick is married to Rachel Strugatz, a BoF contributor. She was not involved in the production of this story.

Lauren Conrad launches a surprise beauty brand. The former star of “The Hills” announced her namesake line, complete with recyclable lipstick tubes, and plans to branch into skincare soon.

Glossier lays off all retail staff as it plans to keep doors shut for the rest of 2020. The news comes as the US government reduced federal pandemic unemployment compensation.

Instagram Reels is starting to entice TikTok’s beauty influencers. Other short-form video apps, such as Triller and Byte, are also potential competitors as TikTok’s US business faces an uncertain future.

Some Covid-19 survivors are reporting hair loss. Doctors and experts suggest that factors such as stress, anxiety and an overworked immune system could be behind the apparent symptom.

The founders of Fresh Beauty are opening a hotel. Open Thursday-Monday, The Maker in Hudson, New York also has a bar, café and restaurant running at 50 percent capacity.

Beauty’s customer acquisition problem could hinder the refillable packaging revolution. Paying a premium for the first product, then a reduced price for refills, can leave customers feeling locked in to a brand they are trying for the first time.

Could oat milk be the next hero ingredient du jour? Oats have long been touted for their soothing qualities, but are now making a comeback as the dairy alternative gains popularity in the food world.

UK-based beauty therapists speak of working “illegally” to stay afloat during the pandemic. The UK Government has left beauticians with an uncertain future as the date for restarting high-touch treatments are being pushed back further.

At-home haircuts have shot up 600 percent during lockdown. Apps like Shortcut, dubbed “Uber for haircuts” are capitalising on the pandemic-era shift.