Maison Francis Kurkdjian's founders tell BoF about LVMH's acquisition of their company and what the deal means for the future. 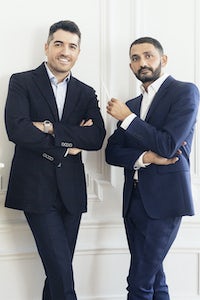 Maison Francis Kurkdjian's founders tell BoF about LVMH's acquisition of their company and what the deal means for the future.

Speaking to BoF shortly after the deal was signed, Marc Chaya, the brand’s CEO and co-founder, said: “We thought it would be an amazing opportunity to anchor everything we have done over the past nine years and concentrate on continuing to drive the business with greater experience and greater means.”

The eponymous perfumer added: “If there’s a product I can’t do myself because we don’t have the know-how, it means that I can have an idea and LVMH will have the expertise to explore new territories and products. I’m not afraid of being bigger, but I think you need the right people to implement what I am creating.”

While financial terms of the deal were not disclosed, both Chaya and Kurkdjian will remain shareholders in the company.

I’m not afraid of being bigger, but I think you need the right people to implement what I am creating.

The announcement is significant in that beauty acquisitions by LVMH are few and far between. It does, however, follow a string of acquisitions by Estée Lauder and L'Oréal which have been investing in smaller, independent beauty and cosmetics brands.

Maison Francis Kurkdjian was launched with a line of 25 products and a boutique in Paris. “Marc and I never thought we were niche,” says Kurkdijan, who created perfumes for established brands, and is the ‘nose’ behind some of the industry’s best-selling scents, including Jean Paul Gaultier’s ‘Le Male’, Narciso Rodriguez’s ‘Narciso For Her’ and Versace’s ‘Jeans Couture Glam’.

“When you start a company, you start small," he continued. "We were privately funded from the two of us, as well as a third party, so it was small because we had limited resources. If I create a perfume, it doesn’t matter if it goes into one bottle or ten thousand; it’s the same thing. At some point, I’d hoped that we could get bigger and the idea is to do that under the umbrella of LVMH."

Today, Maison Francis Kurkdjian has two stores in Paris, three in Taiwan, one in Malaysia and one in Dubai. It is stocked in more than 40 countries worldwide, with more than 30 counters and a presence in almost 500 retailers, including Bergdorf Goodman, Neiman Marcus, Selfridges, Liberty, Harrods and John Lewis.

“Department stores are our main destinations,” said Chaya, a former partner at Ernst & Young in Paris. “They want to create an opportunity for independent brands to grow, and finally the customer wants to have different experiences of perfume and that means the independent market has grown in proportion.”

Maison Francis Kurkdjian, whose largest market is the US, registered retail sales of about $25 million in 2015, up 40 percent versus 2014.

Karen Grant, global beauty industry analyst at NPD, says the market for cult fragrance-only brands, such as Byredo and Le Labo, is growing by 50 percent annually, prompting a flurry of acquisitions by companies like Esteé Lauder, which bought Le Labo and Editions de Parfums Frédéric Malle in 2014, and Manzanita Capital, owner of Diptyque and SpaceNK, which bought Byredo in 2013.

Profits from LVMH’s perfumes and cosmetics division grew by 5 per cent in 2016 to 551 million euros, from 524 million euros.

The Hygge Effect: How Beauty Is Cashing in on Cosy