NEW YORK, United States — I was speaking with an executive at a large multi-brand cosmetics retailer recently who consistently referred to her customer as “she” during our conversation. “Don’t you have men coming into your stores, and certainly shopping online, too?” I asked. “Yes,” she replied, “but our customer will always be predominantly women.”

By the looks of my Instagram feed, it appears that boys and men are consuming makeup (not just skincare) like never before. Milk Makeup reports that men account for 15 percent (a number that’s rapidly growing) of the clientele shopping their website. At M.A.C, men represent 7 percent of the cosmetics customer base (with spending up 3 percent and visits up 6 percent from 2016), and 34 percent of the brand’s PRO Artist members are men, up 26 percent in 2017. Even if women do continue to account for the statistical majority of cosmetics shoppers, shouldn’t retailers and brands — the ones who want to grow, to be culturally relevant, to connect and to make piles of money — cater to these new recruits in what was previously a female sandbox, too?

It’s not just the young makeup-loving aficionados — the ones who are more deft with a lash strip and contouring kit than most women (this woman, at least) — who make up this new consumer base. There is also the undercover makeup man: the one who is not trying to make a statement; he’s just looking to even out skin tone, cover blemishes and perhaps tidy up his brows. The ultimate no-makeup-makeup client. He’s young; he’s old. He’s straight; he’s gay. He’s out there.

This autumn, as a follow-up to its popular men’s BB cream, Lab Series is launching Filter Moisturizer, a tinted lotion that “transforms the look of skin,” says the brand, “but without the feeling of using makeup.” When Tom Ford launched Beauty in partnership with the Estée Lauder Companies 10 years ago, he was “pretty adamant” about including male skin-finishing products, says John Demsey, the conglomerate’s executive group president. “He knew there’s a guy who wants to project his best image.”

Ford’s for-the-boys concealer and gel bronzer, sold in limited distribution, perform consistently well ( both seeing 20 percent sales increases from last year), as does the brow pencil — pinched from the women’s collection — which guys use to fill in eyebrows as well as facial hair. Menaji does swift business with this discreet customer, too, selling him Camo Concealer and “skin-tone matching ” Anti-Shine Powder in a portable mirrored compact. The brand’s website features a video tutorial for newbies entitled “How to apply our men’s makeup.”

Men are feeling really free, so why not express themselves? Not only do we have the terms, we have the tools.

Georgie Greville, creative director of Milk Makeup, envisions men using makeup as an extension of their skincare as the future of the category at large, but also sees evidence of them being more open to bold experimentation. For Milk’s spring campaign, shot by Christine Hahn, Greville tapped model and actor Luka Sabbat. “I let him do it himself,” she says of his look, which features the best-selling Sunshine Skin Tint (“the easiest way to cover under-eye circles for first-timers”), swaths of icy blue cream Eye Pigment (“guys seem to love it because it’s so playful”) and “many strategically placed Tattoo Stamps.”

“There’s going to be more and more ways of men tapping into makeup because, frankly, there’s an identity revolution happening right now,” says Greville. “Men are feeling really free, so why not express themselves? Not only do we have the terms, we have the tools.”

Historically, men did not always shop in the shadows for beauty. “Guys and makeup go back to Egyptian times and the French courts — where men had more elaborate wigs and makeup than the women did — so the notion of guys using beauty to project an image or mood is quite primal,” says Demsey. “It’s the societal shifts over the years that changed it. Men are obsessed with hair products and fragrance, it’s just now that the general audience is comfortable exploring what else is available for them.”

The makeup-loving man has been present in modern culture for a long time. Demsey references the “historical rock’n’roll guy with chipped nail polish and smudged eyeliner”; Mick Jagger “feeling very comfortable putting on a lipstick”; David Bowie’s 1970s glitter rock. “What’s different today is the boy next door is doing it,” says Demsey. 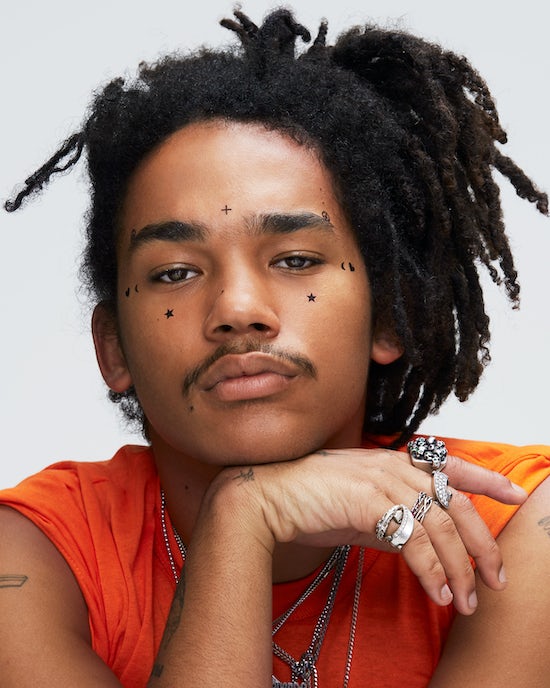 And he is doing it in so many different ways. The trend in boy beauty first manifested itself in Asia, in countries like South Korea, where impeccable skin is prized and going in for a surgical tweak is about as normal as getting a haircut. Image-conscious young men started wearing BB and CC creams, blush, highlighter, concealer and mascara. Demsey describes this cultural phenomenon as “the currency of the next generation. There is a fluidity in terms of self-expression that is genderless,” he says.

The all-in, made-up face may have started with drag culture, but today’s Instagram army has claimed lashes and lipstick for themselves, too, with beauty influencers like Manny Gutierrez coupling his fanciful looks with a close-shaven beard. He’s not trying to look like what we conventionally identify as female with his masterful cat eyes and glossy lips; he’s trying to look like himself.

While men have traditionally been comfortable at M.A.C — indeed, it is behind their counters where social media stars like Gutierrez, Patrick Starrr and Angel Merino got their start — where else do they shop? A quick scroll through Instagram reveals Anastasia, Tarte, Too Faced, ColourPop, NYX, Fenty, Smashbox and Kylie Cosmetics as crowd favourites.

Still, there is a noticeable disparity between the number of male influencers who regularly tag companies’ products (many of which are #sponsored) in their social feeds, and the companies that return the love as enthusiastically by including them in their own communications and imagery.

“There’s a full spectrum of men who participate in the category, and we need to let them know they’re welcome,” says Ukonwa Ojo, senior vice president at CoverGirl. To that end, the brand positioned teenage blogger James Charles as the lead face in its 2016 So Lashy campaign, which ran on television, in magazines and across social platforms under the banner #LashEquality. “Our mascara launches are huge,” says Ojo, and while the brand does not share demographic or sales data, “the launch exceeded our expectations,” she reports. Ojo says that men come to CoverGirl for grooming products like concealer and brow stylers, but they also “go full-face: contour, eye shadow, lipstick, glitter.”

There is a fluidity in terms of self-expression that is genderless.

“Men use all of our products,” says Tarte founder and chief executive Maureen Kelly. As a result, the brand included male faces in the shade chart for the new Shape Tape Foundation, and they’ve just added a male makeup artist and budding influencer to their social team. “We want to represent that demographic on our channels, just like we represent all ethnicities,” says Kelly. “It’s our first boy; it’s exciting.”

In addition to being mighty cosmetics consumers themselves, male makeup enthusiasts may be having an unexpected impact on the women’s category, too. As they drop product news, dispense daily tips and tricks, share new ideas for looks, and reinforce makeup’s trans-formative power, women in their audiences are watching, and learning. Muses Demsey, “A lot of women may feel, ‘If a guy can make himself look that beautiful, so can I.’”

This article first appeared in BoF's latest special print issue: The Age of Influence. The issue — which includes our special report on The Business of Beauty — is available for purchase at shop.businessoffashion.com and at select retailers around the world. If you sign up to BoF Professional before June 29, 2018, you’ll receive this issue as part of your annual membership, which also includes unlimited access to articles, exclusive news and analysis, invitations to networking events and our members-only iOS app. Subscribe here today.