Welcome to the fourth-annual edition of Beautycon New York, an amped up consumer-facing trade show for beauty obsessives. Founded in 2011 by Marina Curry and Jonathan Burford (the former has since exited, the latter is creative director), Beautycon now has a reputation for corralling beauty’s biggest fans. They show up to meet their favourite digital beauty personalities and go home with branded tote bags full of free samples, like masks from Korean beauty brand SooAe, and discounted products, like at-home light therapy devices from skincare brand Revive.

And while the ample space at the Brooklyn Cruise Terminal lessened the stuffed-liked-sardines feeling of previous Beautycon events, energy levels remained high. Major beauty influencer stars such as Gigi Gorgeous, a YouTube personality known for documenting her gender transition on her channel, which has more than 2.6 million subscribers, elicited more screams — and, in a few cases, tears — than Drew Barrymore or Gabrielle Union. Both actresses came to Beautycon to promote their own new beauty lines. 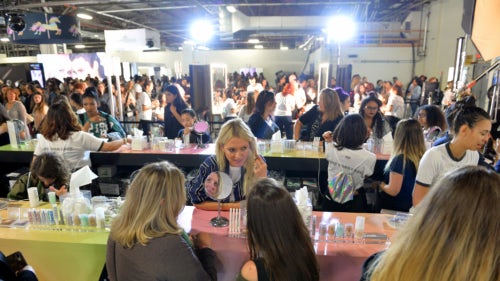 “These are our people, this is our kin… there is such an amazing energy here,” said Zanna Roberts Rassi, on hand with her husband Milk Makeup co-founder Mazdack Rassi to oversee the cult-favourite beauty brand’s installation at Beautycon. In addition to a booth selling the line of products, the brand held an open casting for new faces, and attendees were given makeup touch-ups before posing in portrait sessions shot by Milk Studios photographers. Nearby, space alien mascots, a symbol of the brand, danced and posed with passersby.

“We can be on all the videos and talking to people through the website, but to actually be in a space like this, applying makeup to people, talking to our customer — that, to me, is the best marketing, it’s the best communication,” Roberts Rassi added.

Much has changed since Beautycon began as an industry-only conference for YouTube creators in 2011. When Moj Mahdara — an investor and entrepreneur who previously led a digital agency — took over the business in 2014, she opened the events up to the public, attracting thousands of rabid influencer fans. She soon realised that the conventions could serve as a launchpad for a lucrative multi-platform media company as beauty brands shift their attention and marketing spend online, and renamed the company Beautycon Media. (L’Oreal, for example, reportedly spends about 30 percent of its advertising budget on online, with the majority of that going towards digital influencers).

It helps that Beautycon Media's audience of Gen Z and Millennial beauty super-consumers is incredibly valuable to advertisers. “Is the Super Bowl a football game or a media property?” Mahdara asked a few days before the New York event. “I think every other media brand has worked backwards from that point.”

In March 2017, Beautycon Media raised $9 million in funding, with participation from the likes of A+E Networks, Main Street Advisors and others, who joined seed investors such as Hearst Media, YouTube star Bethany Mota, CAA, BBG Ventures and Roc Nation co-founder Jay Brown. (The venture has thus far raised a total of approximately $11 million.)

The funding will fuel Mahdara’s big ambitions for Beautycon Media, which include launching data-driven consulting services and perhaps even an e-commerce site to compete against the Sephoras of the world. The company currently has three major areas of activity: staging festivals in New York, Los Angeles, London and Dubai; offering a quarterly subscription box service; and creating original editorial content.

Real influence is about hysteria, and what we do is scale hysteria.

“Real influence is about hysteria, and what we do is scale hysteria,” said Elyssa Starkman, Beautycon Media’s new head of content, at its first NewFront presentation, where, just three weeks before its latest New York festival, the company laid out its goals and value proposition to advertisers.

“We are super passionate about this distributed content model and we are really passionate about telling stories on social platforms,” Mahdara told BoF, explaining that much of the funding will go toward senior hires and expanding content and programming as led by Starkman, who joined in April from Refinery29. Much of that content will be produced in partnership with beauty influencers in the Beautycon Media community, allowing the organisation to tap into the direct-to-consumer relationship between the influencer and his or her audience.

“At the end of the day, talent is an incredibly important piece of the puzzle,” Mahdara said.

Product, too, is an important element. While Saturday’s Beautycon was still dominated by the kind of direct-to-consumer and otherwise digitally-savvy independent brands that have disrupted the industry in the last several years, established players are more eager to capitalise on the community than ever before. On Saturday, major mass-market brands including L’Oreal, Revlon, Redken and Rimmel staged elaborate installations in the venue. Maybelline, for example, gave out samples of its new eye shadow palette through a series of “incentive stations” inspired by New York City subway stops.

Lyle Tick, managing director of the Walgreens Boots Alliance’s US operations, thinks the event is most valuable for younger brands eager to build buzz and engagement. Soap & Glory, which Walgreens bought in 2014, occupied an Instagram-friendly pink booth at Beautycon featuring a pink motorcycle and sidecar and free samples in exchange for tagging the brand online. “For a brand you are seeding, it makes a lot of sense in the early life stage,” Tick said. “But it wouldn’t be right for all my brands.”

“I think Revlon is so well known for so many people, but we want to be with young consumers and participate in that energy,” said Linda Wells, the founding editor of Allure and now chief creative officer at Revlon. She was on hand to interview Gabrielle Union on Beautycon’s main stage, and to support Revlon’s presence at the festival, which included a branded “Show & Tell” stage where YouTube star Kandee Johnson and makeup artist Mario Dedivanovic led live makeup tutorials. “We are going through a transformation,” Wells said. "We want to re-identify ourselves with a younger consumer and so it’s a really important thing for us to be a part of. It’s a real sign of where the beauty business has gone.”

Revlon isn’t the only brand looking for reassert itself in the digitally-driven beauty market, and Mahdara sees a game-changing opportunity for Beautycon Media to guide these brands. At the NewFront, she announced a new arm of the company: A qualitative and quantitive data analysis service for clients created in partnership with Culture Co-op, Millward Brown, Netbase and Tribe Dynamics to guide marketing and talent strategy. Beautycon will also release a bi-annual white paper with its findings, the first of which will be published in August.

We think of the festivals as the experience economy of what Beautycon is.

“We are still not in a place where people are spending the lion's share of their budgets in terms of marketing on digital, much less social content, much less platform content,” Mahdara said. “But it is growing rapidly…People who are winning big in this space right now are people who are doing content and commerce, thinking about transactional entertainment and thinking about a value system for the consumer that’s appealing to them. They want experiences, they want their packages to be delivered at a certain time, they want points, they want tutorials, they want information, they want access to meet ups. And I think that’s really where the market is headed.”

In the meantime, Beautycon Media’s festivals are still the core of the company, and serve as its most valuable focus groups. Attendee movement is tracked through RFID-enabled wristbands. Exit interviews, brand booth engagement and product sales inform the data Mahdara is eager to share with brands.

“We think of the festivals as the experience economy of what Beautycon is,” she said. “Getting to see all the talent in their native space with their fans and with media and with the brands… You don’t have to be elite to attend a Beautycon festival, you can be a consumer and you can come and be celebrated and feel beautiful. That’s really what Beautycon is about.”