Growing consumer demand for the sparkly substance comes with steep environment cost. Could a biodegradable alternative be the answer?

Growing consumer demand for the sparkly substance comes with steep environment cost. Could a biodegradable alternative be the answer?

LONDON, United Kingdom — The thing with glitter is that even after you wash it off, it sticks around.

Glitter is trendy, finding its way into products as diverse as Pat McGrath’s BlitzTrance lipsticks to Nicolas Ghesquière’s Autumn/Winter 2019 collection for Louis Vuitton. According to Mintel, 4.1 percent of colour cosmetics launches contained glitter last year, up from 2.5 percent in 2017.

But consumers’ love of all things sparkly comes with a steep environmental cost. Glitter is typically made from layering reflective pigment onto sheets of plastic, which are then broken into pieces as tiny as 0.15 millimetres. And those tiny bits of plastic wind up in the water supply whenever someone throws their going-out top into the wash after a night of clubbing, or showers to remove a layer of shimmery body spray.

Fashion and beauty brands are in a bind: Their customers demand glitter-infused products, but also want their purchases to be sustainable. And thanks to documentaries and articles about the dangers of microplastics and the Pacific Ocean’s garbage patch, plastic trash is the environmental villain of the moment.

Complaints about the environmental cost of glitter can be found in the comments section of instagram posts promoting glitter product launches from brands such as Colourpop and Kylie Cosmetics. Glossier faced a backlash after it released a “Glitter Gelée” in March 2019.

“Any brand that doesn’t [find a sustainable source for glitter] in the next year will fall out of favour,” said Emma Grace-Bailey, beauty editor at WGSN Beauty, a data analytics and trend forecasting agency. “People just won’t buy it anymore.”

Heaven forbid a million-dollar company sacrifices their bottom line for the planet we live on.

A number of companies sell glitter without plastic, including Lush, a cosmetics chain that uses an alternative made from synthetic mica. Online retailers like Asos and Dolls Kill sell beauty products containing biodegradable glitter, but the selection is dwarfed by items using the plastic kind. Cost is a big factor: environmentally friendly glitter can be up to 10 times as expensive as plastic glitter, according to Sophie Awdry, co-founder of Eco Glitter Fun, a biodegradable glitter brand.

The tide may be starting to turn. Glossier is attempting to reformulate Glitter Gelée, a person familiar with the matter said. And in May, UK retailer Primark launched a collection of nine cosmetics products, including an eyeshadow palette and a lip balm, that use biodegradable glitter.

The material is called Bioglitter, made from cellulose, a material derived from eucalyptus plants, according to UK-based glitter manufacturer Ronald Britton. The company began developing biodegradable glitter in 2010, and has licensed the material to brands like Eco Glitter Fun, which is stocked at Selfridges and Galeries Lafayette, and Eco Stardust, sold through Asos and Amazon. Primark is the first large-scale, high street retailer to use it.

“What we’re doing is giving our customers a more sustainable option so they can continue to use glitter,” said Katharine Stewart, Primark's ethical trade director.

Eco Glitter Fun's Awdry said she started her brand in 2017 after being “mortified” to learn that glitter was made from plastic. She said sales have doubled in the first half of 2019 compared with a year earlier.

But Bioglitter’s range is limited — about 20 colours, compared with dozens of shades of Ronald Britton’s plastic glitter.

“It’s a young product,” said Awdry. “You have to think about how far they’ve already come. It will take time to get all the star and heart shapes.” 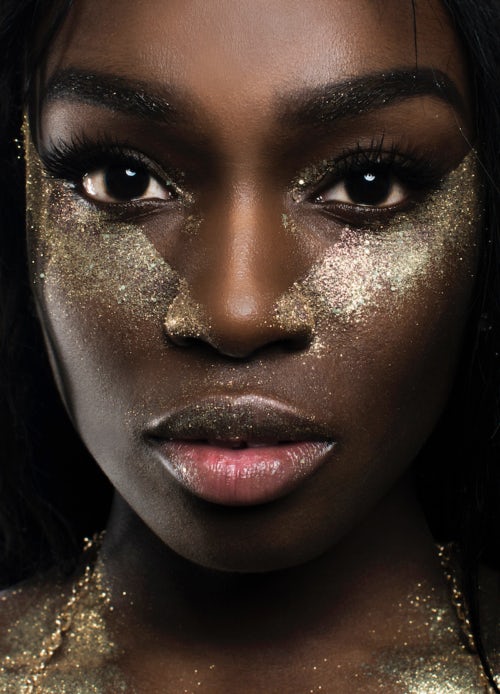 Not all biodegradable glitters are created equal. Many contain a small amount of plastic, which prevents them from fully breaking down when thrown away, according to cosmetic chemist and formulator Stephen Alain Ko.

A biodegradable certification is no guarantee glitter will be free of microplastics. Environmental groups and regulators have multiple standards to determine whether a product can be labelled biodegradable. Some glitters clear the bar to be “compost biodegradable,” but don’t break down as quickly in water, which is where glitter often winds up.

Ronald Britton produces two types of Bioglitter. The first is Sparkle, which still contains a small amount of plastic, and breaks down by 87 percent after four weeks in freshwater. That’s just short of the 90 percent standard for water biodegradability set by TÜV Austria, a certification company. The second, dubbed Pure, clears that bar because it contains no plastic. Primark uses Bioglitter Sparkle; other brands such as Eco Glitter Fun use both.

But consumers can find themselves confused or misled by the different standards and labels.

Arianna Duncan, a 19-year-old beauty sales assistant in the UK, said she was disappointed, though not surprised, when she discovered that her Urban Decay Heavy Metal Glitter Eyeliner was not biodegradable.

“Heaven forbid a million-dollar company sacrifices their bottom line for the planet we live on,” she said, adding she wouldn’t buy from the brand again.

Urban Decay said it is working on developing products with biodegradable and plant-based glitters.

California-based beauty brand Colourpop Cosmetics frequently releases new glitter palettes and has a section of its website dedicated to over 40 plastic glitter products in gel, pressed and loose form. Colourpop declined to comment.

British cosmetics brand Barry M has added biodegradable glitters to its arsenal of sparkly products; however, these are easily outnumbered by the plastic glitters still sold on the brand’s website.

Mac Cosmetics and Nyx, both of which sell an assortment of plastic glitter products, declined to comment for this story. Kylie Cosmetics did not respond to requests for comment.

Consumers are becoming increasingly conscious of their plastic consumption, especially single-use plastics, and the beauty and personal care market is no exception to this trend. Mintel’s British Lifestyles 2019 report showed that beauty shoppers versus other shoppers are the most likely, at 47 percent, to take ethical considerations into account before purchasing beauty and personal care goods.

Some say brands still have a long way to go to address those concerns.

Hannah Markmann, aged 18 from Canberra, Australia, said brands “may be aware of the negative effects their products can have on the environment but appear apathetic in actually creating any change.”

Could biodegradable glitter be the answer?

Editor's Note: This article was revised on 5 August 2019. An earlier version of this article stated that Sparkle breaks down by 87 percent after nearly two months in freshwater. That is incorrect. It takes 4 weeks to break down.