TORONTO, Canada — A judge in Ontario could as soon as Friday decide the fate of Deciem, the company behind The Ordinary and other buzzy beauty brands that was thrown into chaos by its founder this week.

Founder and chief executive Brandon Truaxe ordered the company to shut down operations in an Instagram post on Monday where he accused a long list of Deciem employees and investors of unspecified financial crimes. Since then, Deciem’s homepage has been replaced with an all-red screen, and most The Ordinary shops have closed.

The Estée Lauder Companies, which owns 28 percent of Deciem, applied for an injunction Thursday in Ontario’s Superior Court to strip Truaxe of his chief executive role and remove him from the company’s board. The beauty giant said the founder’s behaviour violated a shareholder agreement that had protected his position by requiring Truaxe’s approval to make major personnel decisions. The matter could be decided at a 10 a.m. ET hearing in Toronto.

The legal action marks a shift in strategy for Estée Lauder, which said Monday it was effectively powerless as a minority shareholder to influence Truaxe or Deciem, but by Tuesday had said it would “defend our rights.” By Thursday, with stores closed for a third day – and Truaxe posting a steady stream of accusations and internal correspondence on Instagram – the company had to take a more aggressive stance to protect its investment and reputation, experts say.

An Estée Lauder spokeswoman declined to comment. Truaxe and Deciem’s co-chief executive Nicola Kilner – who Estée Lauder wants the judge to appoint as sole CEO – did not return messages sent by email and on Instagram.

Plenty of companies have grappled with a founder, chief executive, creative director – or “worker,” as Truaxe retitled himself earlier this year – going rogue. But the introduction of social media to the mix has changed the speed and magnitude of the fallout.

Tesla chief executive Elon Musk was forced to step down as chairman of his auto company last month to settle a securities fraud charge stemming from an August tweet. And Kanye West’s vocal support for President Donald Trump, obsessively documented and discussed on Twitter and Instagram, potentially jeopardises billions of dollars in future Yeezy sales. By comparison, the ouster of Dov Charney from American Apparel in 2014 happened in slow motion.

“There’s no time for a publicist to get involved,” during a social media meltdown, said Emily Parr, founder of Poke PR, a public relations agency that specializes in the beauty space. “There’s no longer buffer time to prevent a situation from happening. If a client, founder or a brand is very reactionary, they’re one click away from a crisis situation.”

Truaxe has long been known for his sometimes erratic Instagram posts on both his personal account and Deciem’s official feed. His online persona has alternately helped and hurt the company, which maintains a portfolio of skin care brands including The Ordinary, Deciem’s most popular line, as well as Niod, Stemm, Fountain and Chemistry Brand that collectively generate about $300 million in annual revenue, according to industry sources.

The latest controversy has boosted Truaxe’s following as The Ordinary fans express support and concern. Truaxe’s personal account has 10,800 followers as of Thursday night, up from 10,100 earlier that morning, and Deciem’s has 373,000 followers, down from 374,000 over the same period. 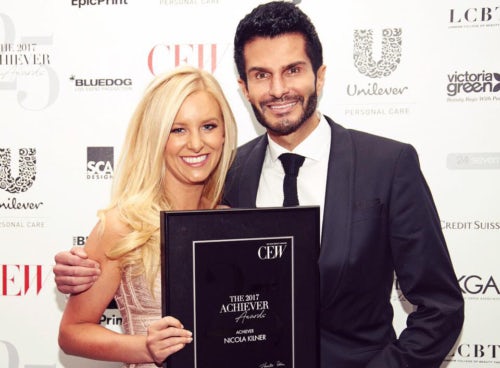 Deciem’s Instagram account is a central battleground in Truaxe’s fight with Estée Lauder. Truaxe published excerpts of Estée Lauder’s court filing to Deciem’s official Instagram account, as well as an e-mail he received from Mark Gelowitz, Lauder’s lawyer. Over the course of the day, Truaxe was locked out of the corporate account, but continued to publish to his personal feed, including screenshots of a text message chain with an unknown individual detailing his efforts to regain control of @deciem.

Truaxe appears to have resumed posting to Deciem’s account, including screenshots of an e-mail he sent to Gelowitz, in which he said he intended to appoint a new board of directors and hire an attorney to respond to Estée Lauder. His post, accented with emojis depicting a bag of money and a hammer, received hundreds of comments within hours.

The conflict has left Deciem fans confused, with some rushing to The Ordinary’s online store – still open as of Thursday evening – to stockpile products like the Hyaluronic Acid 2% + B5 serum before they vanished. Others said they planned to wait the fight out.

"I don’t want this to be the end of Deciem. I don’t want to see Brandon’s work go down the drain. Selfishly, I don’t want to lose access to these wonderful products,” said Meghan Emery, a 35-year-old food scientist who follows Truaxe on Instagram and commented on one of his posts. “Estée Lauder, being a large corporation, will have an army of experienced folks who can offer assistance to the Deciem team until things settle down. The legal action Lauder is taking, from what is shown on Instagram, seems like a logical step for an investor to take.”

"Seeing that Estée Lauder has filed a lawsuit, in a way, is reassuring. I love my Deciem products," Emery added.

The legal action comes after a string of bizarre events on behalf of Truaxe the past several months. Truaxe has published personal emails between him and Estée Lauder chairman emeritus Leonard Lauder, as well as blog posts that defended his mental health, and made accusations against numerous parties. In February, he fired co-chief executive Kilner – only to re-hire her in July.

Even after all that, Truaxe has plenty of support.

Sumaiya Tabassum Kabir, a 22-year-old student from Dhaka, Bangladesh who wrote a supportive comment on Truaxe's post, said that as a customer, she’s worried about the company.

“It doesn't actually make me love The Ordinary any less. However, I feel if Brandon isn't a part of it anymore, it won't be the same,” Kabir said. “I would have a hard time trusting Deciem knowing that the founder isn't a part of their management and operations.”

Inside Glossier's Plans to Shake the Beauty Industry