The brand hopes to attract younger consumers with the introduction of a lower-priced fragrance line, launching exclusively with Sephora.

The beauty giant made introducing lower-price fragrances a condition of its 2016 acquisition of the brand, founder Kilian Hennessy told BoF, and he has been working on it since. The new scents were designed to reach a new audience of consumers priced out by By Kilian’s main line, which averages around $300 per bottle. “My Kind of Love” includes four scents at prices ranging from $30 to $135.

By Kilian's new line will now be sold in 900 Sephora locations in the US, France, Italy and the Middle East as part of a broader push to widen distribution for the brand Hennessy describes as artisanal because of the quality of the raw materials and the time spent developing new scent formulations. Since the acquisition, By Kilian has started selling the main line through more multi-brand retailers and online, where Sephora.com is its third-highest performing point of sale. The brand is also preparing to launch on Alibaba’s Tmall in China.

"By Kilian is the perfect example of how we have invested in building a high-end artisanal fragrance portfolio of brands that create bold, emotional experiences and connections with consumers," said John Demsey, the Estée Lauder Companies' executive group president, in a statement.

“My Kind of Love” takes inspiration for its names such as “Kissing Burns 6.4 Calories a Minute. Wanna Workout?” from the tongue-in-cheek sensuality of popular makeup brands like TooFaced. In Sephora stores, shoppers will be prompted to choose a flavour of love which corresponds with the different scents: fun, sparkling, hot and sweet. It will be supported by a digital video-centric global media campaign. 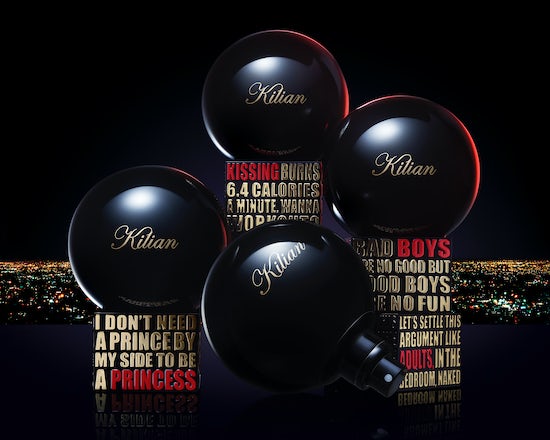 “My Kind of Love” By Kilian | Source: Courtesy

Hennessy, whose family's cognac business is now owned by LVMH, founded By Kilian in 2007. It stood out in the fragrance market as more consumers started searching for unique, artisanal scents instead of the more readily available luxury house options or celebrity-backed lines. His most popular regions after the US are Russia and the Middle East.

Hennessy recognises the importance of reaching younger millennials, the fastest growing luxury consumers, with a more accessible price point. He said he plans to raise the prices on the main line, which he previously focused on keeping below that of many of his luxury competitors, which can average around $500 a bottle, to be more competitive.

“We put a lot of money into raw materials,” said Hennessy. “Even at the $300 price point, I’m not making the margins that Estée Lauder wants — not even close.”

Estée Lauder acquired the Paris-based brand for an undisclosed sum as part of its efforts to diversify its fragrance offering, which is dominated by Jo Malone and Tom Ford. The conglomerate bought two other small luxury fragrance brands, Le Labo and Editions de Parfurms Frederic Malle, in 2014. According to Euromonitor International, the global fragrance market was worth $48 billion in 2016. Estée Lauder’s fragrance category grew 10 percent in fiscal 2017 to $1.6 billion.

Speaking about luxury artisanal fragrances in the most recent call with investors, the company’s chief executive Fabrizio Freda said, “We have chosen really to leverage that piece of the fragrance market, because we believe that's where a lot of the future is, and we are making great inroads there.”

Freda also highlighted the fragrance category’s growth in travel retail, which Hennessy said accounts for four of his brand’s top twenty points of sale. “That’s an element we have tremendously accelerated as being part of [Estée] Lauder.”

“[Distribution] is a critical element,” said Hennesy, recalling a visit to a Bloomingdale’s before it opened in the Middle East and realising that, despite his brand’s popularity in the region, he was stuck in the back after the conglomerates claimed their retail floor spaces.

“That’s when I knew it was time to join forces [with a strategic partner],” he said. “It’s hard for the independent ones because [Estée] Lauder in the luxury department stores has 40 or to 50 percent market share.”

“My Kind of Love” isn’t By Kilian’s only new launch this autumn. In September, Hennesy is releasing a new perfume inspired by Bergdorf Goodman’s women's fashion director and senior vice-president Linda Fargo, a longtime friend and business partner, entitled “Do It For Love.” It will be available exclusively at Bergdorf Goodman and By Kilian’s eight boutiques.

“While I am launching two sets of fragrances that represent two visions of love, it could not be more opposite from distribution standpoint,” said Hennesy. "There is so much more to come."