Rihanna’s Fenty Beauty range did nearly €500 million in its first full year in business, which could put her a step ahead of Kylie Jenner and her cosmetics empire.

Rihanna’s Fenty Beauty range did nearly €500 million in its first full year in business, which could put her a step ahead of Kylie Jenner and her cosmetics empire.

We now know the value of the Fenty Effect: 500 million euros.

That figure represents the sales generated by Rihanna’s Fenty Beauty range in its first full year in business, LVMH reported last week. The brand, created in partnership with the French luxury conglomerate’s Kendo Beauty division, launched in September 2017, and the “Fenty Effect” was born. Fenty Beauty’s 40 shades of foundation (since expanded to 50) now act as a litmus test for the beauty industry; Morphe’s foundation (60 shades) was celebrated on its launch last month, while debuts from Tarte and It Cosmetics last year featuring more limited ranges for women of colour were subject to online pile-ons.

The cultural impact has been well documented. Let’s take a closer look at what Fenty Beauty means for LVMH, and its globe-spanning beauty retail giant, Sephora. Rihanna’s cosmetics launched exclusively at Sephora and did a reported $100 million in sales in its first 40 days (by comparison, white-hot brands not fronted by an international pop star, like Huda Beauty and Anastasia Beverly Hills, needed years to hit that milestone).

Sephora needs a cash cow like Fenty Beauty more than ever. LVMH acknowledged that the chain’s growth slowed in the latter months of 2018 following a “tremendous” first half. Competition from rival Ulta Beauty and direct-to-consumer brands is heating up.

Speaking of competition, LVMH lifting the curtain a bit on Fenty Beauty’s financials will help distance the brand from its biggest rival, Kylie Cosmetics.

Kylie Jenner launched her beauty line a couple of years before Rihanna, in 2015, and as of November a selection of her lip products entered all of Ulta's approximately 1,200 locations, where it plays a similar role in driving both sales and buzz. Tara Simon, senior vice president of merchandising at Ulta Beauty, told BoF that the retailer expects to up Kylie Cosmetics' presence online and in-store with a broader selection this year.

By the numbers, Rihanna is a step ahead: its 2018 sales alone surpass the $420 million Kylie Cosmetics generated in its first 18 months, originally reported in a WWD article I wrote in August 2017, though Jenner’s sales figures predate her partnership with Ulta.

Rihanna is benefitting from what one venture capitalist described to me as “arbitrage 101” for LVMH, which owns both Sephora and the retailer’s best-performing products. Fenty Beauty can take Sephora’s sales data and use it to develop new products, which the beauty retailer can then give prime exposure online and in stores. Jenner, who started out selling her products via her own online store, can only dream of that sort of synergy.

According to the same WWD story, Jenner’s biggest sales day to date was Nov. 21, 2016 when her e-commerce site did $18,926,657.29 million in sales. This is evidence that Jenner can equal Rihanna’s hype, but perhaps hasn’t built as sustainable a business – yet. The former relied on direct sales until entering Ulta, which still only carries an assortment of her product in the lip category, and doesn’t have Sephora’s global muscle behind her (Ulta has yet to expand beyond the US).

But LVMH’s ownership of Fenty Beauty could also prove to be golden handcuffs for the singer. While Sephora is, well, Sephora, there are limits to how much one can scale while staying exclusive to a single retailer. Another person who works in the financial space said it could become “challenging” if Rihanna ever wants to expand beyond Sephora’s shelves.

And while Rihanna’s sales may be better, Jenner is probably getting richer from her beauty line (even if calling her a billionaire may be a stretch). Jenner owns 100 percent of her brand, having managed to get it off the ground and even lining up a manufacturer, Colourpop parent Seed Beauty, without offering equity. Rihanna’s stake in Fenty Beauty hasn’t been publicly disclosed, but LVMH’s share is sizeable. It raises the question: is it better to own the entirety of a smaller company or a percentage of a larger one?

With Jenner’s wholesale distribution picking up, there could be a Kylie Cosmetics vs. Fenty Beauty style showdown between Sephora and Ulta. We’ll just have to wait and see.

Editor's Note: The previous edition of this newsletter, published 29 January, 2019, misstated that Drunk Elephant’s asking price for a sale is $1 billion. This is incorrect. Industry experts predict the company could sell for that amount; the company itself has not floated this figure with potential buyers. 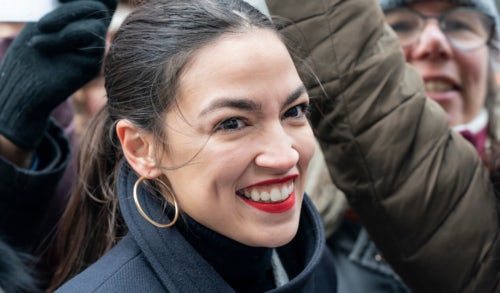 Alexandria Ocasio-Cortez brought K-beauty to Congress. The hugely popular Democrat has become the first congressional member to put a cult beauty trend up for discussion by revealing her skincare routine (it's heavily influenced by Korean beauty regimens). K-beauty has been making its way into the American consciousness since about 2015. It involves exotic ingredients such as snail mucus and an emphasis on knowledge of active ingredients. The approach has infiltrated the mass market, giving rise to sheet masks, serums, essences and other skincare products.

Budget cosmetic brands are the next big thing. Thanks to low-price, premium-looking brands such as The Ordinary and Beauty Pie, it’s now cool to talk about costs, profit margins and integrity. Transparency about pricing has become a significant factor for savvy consumers who’ve grown up expecting more for less, and any stigma attached to supermarket and own-label brands is fading. Sainsbury’s relaunched its Boutique line last year with 109 products, priced from £2; while Boots has launched label CYO, which features 200 products including eyeshadows starting at £3.50.

Target’s accelerator welcomes 10 new beauty startups. As Target continues to brush up on its beauty offerings, adding more lines from emerging startups is one path to drive consistent foot traffic, much as its new private label lines have been. For young brands, the opportunity to work with Target has the potential to get their product in front of thousands of mass merchandise shoppers. Past brands that have made the jump include Girl+Hair and YUNI Beauty. Oars + Alps, a natural skincare product line for men, will make its debut in February.

Beauty brands are serving food. Glossier, Benefit and L’Occitane are the latest brands to grow their audiences with pop-up cafes. For Benefit, it came in the form of a bright pink roller diner in Los Angeles, where items such as its popular brow products, new eyeliner launch and “BeneBabe” merch — a line of pink crop tops, tumblers and makeup bags — were sold. Glossier launched a pop-up shop inside San Francisco’s Rhea’s Cafe, while a L'Occitane cafe opened in Singapore after successful ones in Tokyo and London. It’s all part of a wider trend where brands are using offline experiences to engage its existing digital community.

Malaysia’s halal beauty market is growing swiftly. With two-thirds of the world’s Muslim population in Asia-Pacific, the southeast Asian country wants to be a global halal hub. It’s a lucrative business: In 2017, the local halal industry contributed approximately 7.5 percent to Malaysia’s GDP. SimplySiti, founded by singer Siti Nurhaliza, offers cosmetic, fragrance and skincare products that are halal-certified. Mainstream firms such as Clara International, Johnson & Johnson, Silky Girl and Wipro Unza have also jumped on the halal bandwagon. Halal cosmetics must be free from alcohol, blood and parts or substances from animals that have not been slaughtered, according to Islamic practices.