NEW YORK, United States — When Into The Gloss blogger Emily Weiss launched Glossier, her digital-first beauty brand, last October, she knew she wanted to ground the business in feedback from consumers. Over the past year, Weiss has gleaned plenty of insights — from Instagram comments, emails and online surveys — that she has been able to leverage as she develops her brand, product offering and customer experience. Take, for instance, consumers living outside of the US, who were unable to order products. “The number one question we get is about international shipping,” Weiss says. “It pained me.” So much so that Into The Gloss published a post explaining why international shipping was so difficult to operationalise.

To relieve that pain point sooner than a start-up’s roadmap might allow, Weiss has partnered with luxury e-tailer Net-a-Porter. Beginning September 9th, Net-a-Porter customers across the globe will be able to purchase a $36 three-pack of Glossier’s Balm Dotcom, an all-purpose salve that is a mainstay of the brand. 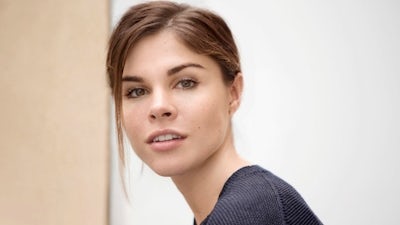 This small but significant partnership is just the latest milestone in Weiss’ trajectory from a blogger to fledgling beauty mogul. The former stylist’s assistant started her beauty blog Into The Gloss in September 2010 as a window into the well-stocked bathroom shelves of fashion insiders. Five years later, she is the chief executive of two brands, has raised $10.4 million in venture backing and employs a team of 38. “It’s been a lot to take in for a girl who went to NYU art school,” says Weiss. “I’m learning first hand to do everything.”

“Everything” includes overseeing Glossier, which now manufactures seven unique products, as well as Into The Gloss, which publishes, on average, four new stories a day and attracts over one million unique visitors each month. But Weiss had no ambitions to launch a cosmetics brand when she first developed the concept for Into The Gloss. “There was no real strategy — and certainly not a business strategy,” she says.

The idea for the product line emerged gradually in the late spring of 2013. “There wasn’t one ‘aha’ moment,” says Weiss. “It really took shape based on many factors.” One factor was Weiss’ belief that there was a gap in the market for a beauty brand geared toward millennials. “I love all my products and yet there has not been a brand that has come to define my generation,” she says. “I want to think about what beauty means today in 2015. What do people want? What do they care about? From a distribution perspective, what is going to be exciting? What is going to be exciting product?”

Glossier’s products come in clean, sharply designed packaging, with emoji-inspired stickers. “We believe that being yourself and being honest and authentic sells,” Weiss says. “If you feel sexy, great. If you feel a little sad today, okay. If you want your freckles and scars to shine through, cool… We're taking a chance that women will respond to this reclamation of beauty and their bodies.”

In the fall of 2013, Weiss raised $2 million in a seed funding round led by Ben Lerer of Lerer Hippeau Ventures and Kirsten Green of Forerunner Ventures, who was drawn to Weiss’ “unique perspective on both beauty and her customer.” Weiss used the money to grow the Into The Gloss team and realise the concept for Glossier, which launched a year later with an Instagram campaign. Weiss says that the products are a direct response to insights she and her editorial team have culled from community feedback and countless interviews across the globe. “We have an extremely engaged community and a robust comments section.”

To help turn her community into customers, Weiss’ has continually asked readers for feedback, so they feel a part of the process. In January 2015, Into The Gloss published “What’s Your Dream Face Wash?”, asking the community what they wanted from a cleanser. The post received more than 370 comments on the site and thousands more across the company’s various social media channels. Glossier’s cleanser, which is in the final stages of development and will debut in early 2016, is the company’s first “truly crowd-sourced product,” according to Weiss. “This is a company built just as much around our community as it is by us.”

Weiss first began listening to feedback from her community when she started Into The Gloss. In particular, she noticed how readers regularly complained about the finish of moisturisers — that they felt heavy or sticky. Glossier’s Priming Moisturiser — one of the first four products to be released by the brand — was a response to this feedback. 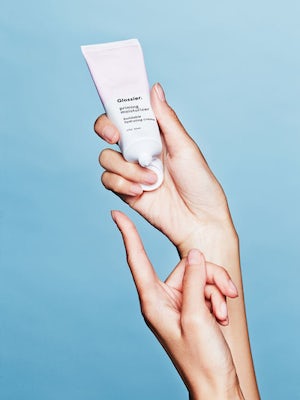 Glossier has introduced several new products since an initial launch comprised of the aforementioned moisturiser and balm, as well as a perfecting skin tint and a face mist. But the rollout has been carefully paced. First, there was a limited-edition metallic eyeliner for holiday 2014. Then, in 2015, the company introduced two facemasks and a coconut-scented version of its balm. Many beauty brands rely on trendy ingredients or a flood of product launches each year to keep customers interested, but Weiss prefers to deliver products she knows fulfil a need and future product development will continue to be driven by authentic customer feedback, she says. “Beauty has historically been about selling an idea of perfection through ‘problem/solution’ products and marketing efforts. We believe in women feeling proud of who they are everyday. That means creating products designed for real life.”

When Weiss raised another $8.4 million in November 2014, just a month after she launched Glossier, the round was oversubscribed, she says. Since then, Glossier has achieved “impressive” quarter-over-quarter revenue growth, says Weiss, who declined to disclose financial data. Interestingly, Glossier customers are buying across SKUs, she adds: “Traditionally a brand will find that it has one or two hero products. But our product-purchase mix is robust.”

Weiss has surrounded herself with a strong team of 38 employees, across both Into The Gloss and Glossier, up from five in late 2013. While early partners Nick Axelrod and Michael Harper left the company in 2014, when the focus of the business shifted from media to e-commerce, Weiss has since made several key hires. First, there was president and chief operating officer Henry Davis — Weiss’s “strategic, business-minded counterpoint” — who arrived from London-based venture capital firm Index Ventures in June 2014 and has supported Weiss in everything from hiring to fund raising. Then there is creative director Helen Steed, previously of Jawbone and Bumble and Bumble, who oversees everything from packaging design to digital design. Weiss also hired a director of marketing, a vice president of physical product, a head of digital product and a director of finance, as well as, most recently, her first vice president of engineering, Bryan Mahoney, who hails from Dynamo, the Montreal-based firm that built Glossier’s website.

Weiss has also grown into the role of chief executive along the way, saying she’s learned to think about her business in a more strategic and considered way. “I've spent my life relying on light bulb moments and just jumping in full force,” she says. “That's fine when you're making something on your own, but not fine when you're 30-plus people and there are a ton of stakeholders, as well as knock-on effects of pretty much every initiative we take on.”

Today, Weiss’ approach is more even-handed. “I'm learning to assess before deciding, and just be a bit more thoughtful about goals and consequences when it comes to making decisions,” she says. “As a start-up, we are moving at lightning speed and there are a lot of interesting options for us — lots of great opportunities, from international demand to partnerships — and right now it's so important to have focus.”

Weiss says that, with her team in place, it’s time to scale Glossier. “We haven’t even scratched the surface on marketing,” she says. “We’ve done very little paid marketing. It’s been word of mouth.” Glossier launched a six-week pop-up on the ground floor of its Soho office to coincide with its launch. This summer, the team also opened up the penthouse floor of its office to customers every Friday. But Weiss has no plans for a permanent physical retail space. “While it’s great to have another touch point and meet people face to face, our focus is very much on the digital,” she says.

Amidst a flurry of activity, with beauty conglomerates acquiring independent brands — in the last year alone, Estée Lauder acquired Le Labo, Frederic Malle, Glamglow and Olio Lusso, while L’Oreal purchased Carol’s Daughter — there is little doubt that the large beauty players companies see Glossier as a potential acquisition target. But Weiss waves away any talk of a sale: “We’ve just gotten started launching a brand that can really stand the test of time and is built well. We have a ways to go before we consider something. It’s certainly flattering, but we really just have our heads down.”

Editor’s Note: This article was revised on 4 September 2015. An earlier version of this article misstated that Henry Davis was chief executive of Glossier. He is chief operating officer.