Harry’s Made Shaving Cool. Can Its Founders Do the Same for Hawaiian Tropic and Banana Boat?

Following its $1.37 billion acquisition by Edgewell, Harry’s co-founders are taking their brand into the haircare space and taking on their biggest challenge to date: reviving the beauty giant’s troubled US business.

Harry’s Made Shaving Cool. Can Its Founders Do the Same for Hawaiian Tropic and Banana Boat?

Following its $1.37 billion acquisition by Edgewell, Harry’s co-founders are taking their brand into the haircare space and taking on their biggest challenge to date: reviving the beauty giant’s troubled US business.

Harry’s is plotting to take over men’s bathrooms and showers, one shelf at a time.

After disrupting the men’s shaving category with its subscription razor service, the brand has set its sights on the far larger haircare market with a suite of shampoo, gel and other products slated to launch next week.

The line, called Hair by Harry’s, offers a glimpse into the ambitions of Jeff Raider and Andy Katz-Mayfield, who co-founded the brand six years ago and sold it earlier this month to Edgewell Personal Care for $1.37 billion. At Edgewell, Raider and Katz-Mayfield will be tasked with building Harry’s into a men’s grooming juggernaut while also reviving Edgewell’s lagging US businesses, which include Schick, Banana Boat and Hawaiian Tropic.

The arrangement echoes other tie-ups between ageing consumer-goods behemoths and buzzy, direct-to-consumer start-ups. While Harry’s is far smaller than Schick, it’s one of the few razor brands to show growth in recent years, and is popular with young consumers who Edgewell has struggled to attract. Unilever made a similar calculation with its acquisition of Harry’s main rival, Dollar Shave Club, in 2016. And though Bonobos has had a negligible impact on Walmart’s balance sheet, founder Andy Dunn has played a pivotal role in transforming the retailer’s e-commerce strategy. 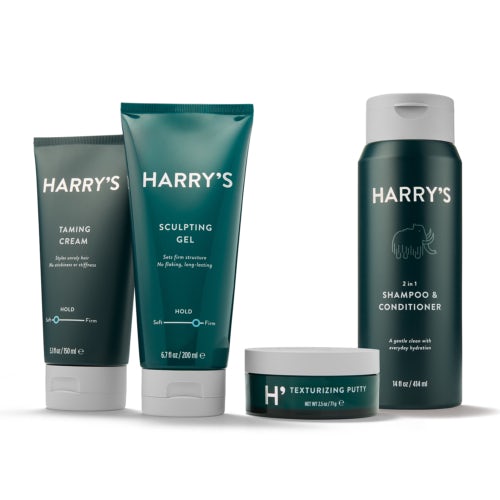 Harry's is launching a line of men's haircare, Style by Harry's | Source: Courtesy

“It’s a lot less about shavers and the shaving category and a lot more about, ‘How do we take your ways of working and apply it to other categories that still have runway for growth?'” said Laura Gurski, senior managing director and global lead for Accenture’s consumer goods & services practice. “This is a business model feeding the company.”

Investors are sceptical Harry’s founders can turn Edgewell around. The company’s stock plunged 15 percent the day the deal was announced and has dropped by 22 percent this year.

Harry’s sales doubled last year when revenue for Schick and Procter & Gamble’s Gillette both fell, according to Euromonitor. The challenge is to maintain that momentum now that Harry’s is no longer the new start-up on the block. After the acquisition, Raider and Katz-Mayfield sent an e-mail to customers reiterating their commitment to “delivering the best products” at the same level of service and at fair prices.

Haircare was a natural leap for Harry’s because while men aren’t shaving their faces as much as they used to, they are paying more attention to the hair on top of their heads, Raider said. The initial items, including a taming cream, 2-in-1 shampoo and conditioner and a texturising putty, are intended to address “trade-offs” men have had to make with products. For instance, if a gel has good hold it often makes hair “crispy,” said Raider.

Harry’s will need to lean more heavily on brand loyalty, rather than price, to win customers. Its razors were an instant hit in large part because, at $2 each for eight blades, they cost less than the majority of similar offerings from leading brands like Procter & Gamble’s Gillette and Edgewell’s Schick. At $7, Harry’s shampoo and conditioner costs about as much as Procter & Gamble’s Head & Shoulders. While haircare has a mass pricepoint, branding is meant to evoke a more prestige feel, similar to The Ordinary’s serums that cost $6.80. Raider said he’s “comfortable making less” than the 80 percent margins prestige haircare products typically generate.

As for Edgewell, the hope is that Raider and Katz-Mayfield will apply elements of their formula for winning the direct-to-consumer market to the company’s other personal-care lines.

The company desperately needs an overhaul. Sales have fallen every year since it was spun off from Energizer Holdings in 2015, to $2.2 billion last year. Shaving products drive about 60 percent of sales and have seen the steepest decline, as they rely on the wholesale model disrupted by Harry’s and Dollar Shave Club. Sun and skincare are the next-biggest category, where brands like Banana Boat and Hawaiian Tropic need a makeover to shed their association with bikini bodies cooking on the beach. Competitors have also eaten away at the company’s feminine-care brands, including Gentle Glide tampons and Stayfree pads.

“There might be an opportunity to have those brands … speak more directly to customers and engage them differently in certain situations – and clearly direct to consumer is part of that,” said Raider of Edgewell’s grooming brands. “We think about Harry’s as a brand first. How does that brand feel to people? What beliefs does it share with people, how is it connecting and engaging them? And then direct to consumer is a channel by which the brand can do that. Those things are highly connected.”

He and Katz-Mayfield will spend the coming months assessing Edgewell’s portfolio to better understand each brand’s values in order to communicate most effectively (and directly) with their target demographics. Direct to consumer will become the vehicle in which the two can implement “interesting things” and “constantly engage” consumers.

In essence, they’re playing the market more broadly and can appeal to a traditional Schick customer (which Harry’s may not speak to) as well as the younger, more “progressive” male that gravitates towards Harry’s more direct selling and sleeker branding.

Raider doesn’t think Schick will cannibalize Harry’s business or vice versa ­because each entity is “distinct in who they speak to.” However, entering new categories – even if they may be adjacent – could be tricky for companies with businesses deeply rooted in a single category. Will the brand be able to convince consumers that it’s now a haircare authority?

Harry’s range of three body washes and soaps launched at Target and the brand’s e-commerce site last year, and according to Nielsen, Harry's had the number one body wash stop keeping units (SKU) at the retailer last year. The brand comprised over 10 percent of Target's men's body wash sales with just three items. Target also carries Flamingo, Harry’s first grooming line aimed at women. In April, Harry's entered Boots stores in the UK. Style by Harry's will roll out at Walmart and Target following a launch on Harry’s e-commerce site June 4.

“The history says they’ve proven that they have the team and horsepower and knowledge and experience to thoughtfully enter into adjacent related new products,” said Josh Goldin, co-founder and managing partner at Alliance Consumer Growth, which led the brand’s $112 million Series D round of funding in 2017. “If the product is an amazing hero product and it’s next to or near existing product they currently have, that’s a really good formula.”

Chiara Ferragni co-designed a makeup line. The influencer worked with Lancôme on a makeup collection that will hit Nordstrom June 13 (it’s already for sale in Italy).

The Ordinary is expanding its distribution. Ulta Beauty will launch Deciem’s biggest brand on its e-commerce site in July and in 400 stores Aug. 5.

Why Jaclyn Hill steered clear of red lipstick. The influencer’s standalone beauty brand launched with 20 shades of nude lipstick this week to ensure than anyone can find a nude that works for them.

Colourpop is the most searched for and visited brand online. The brand was the most visited beauty web site in April with 2.09 million site visits, coming out slightly ahead of Jeffree Star Cosmetics’ 2.06 million visits.

This new scent is inspired by sex. Or “the moment of exhaustion after climax” according to scent designer Katharina Dubbick’ new installation.