NEW YORK, United States — As K-beauty has spurred global cult product trends like BB cream and sheet masks, it is yet to be seen if Asia’s cushion foundation craze will spread to other regions.

It’s spongy, it’s moist — and though most Western consumers probably have never heard of it, the cushion foundation compact is already a key profit generator for the world’s biggest beauty companies.

The cushion foundation compact, a sponge soaked in a combination of foundation, skincare ingredients and sunscreen, has been a sensation in South Korea for years. Now, the compacts are sweeping China. Estée Lauder Companies singled cushion foundation out as a growth driver for its Tom Ford and La Mer brands last year. The conglomerate, along with rivals like Amorepacific and L’Oréal Group, are testing the waters for the product’s potential in the West.

If they succeed, cloud foundation compacts will be the latest beauty product to make the journey from a niche item popular among K-beauty fanatics into a global makeup staple. In the years since the K-beauty craze kicked off in the West in the early 2010s, the cosmetics industry has developed a lucrative pipeline to bring Korea’s top-selling products and ingredients to the world.

I believe timing is everything.

This formula, perfected on items ranging from BB cream to sheet masks, involves a combination of influencer marketing, R&D and retail partnerships. Between 2014 and 2017, Korean beauty exports grew by 130 percent to reach $4.37 billion, according to the US International Trade Administration. As the market for early cult K-beauty items becomes saturated, brands are seeking out new products to introduce to an international market. They also see K-beauty, with its focus on skincare, as a way to offset sluggish colour cosmetics sales in the US.

Cloud foundation compacts were first introduced in 2008, when Korean beauty conglomerate Amorepacific’s IOPE brand launched its cushion compact, a urethane foam sponge soaked in BB cream with anti-ageing skincare ingredients and SPF 50 sunscreen. Other Amorepacific brands, including Sulwhasoo, Hera and Laneige followed with their own versions.

The product broke into the mainstream when it was featured on the hit K-drama My Love From the Star in 2014, where actress Jun Ji-Hyun’s character, the female protagonist on the show, was shown applying the IOPE cushion foundation. An inflexion point came that year, when Amorepacific brands sold 26 million air cushions, double the previous year and comprising 10 percent of its total sales, according to the company.

Amorepacific tried to deter would-be competitors by taking out patents and suing brands that introduced similar products. But both K-beauty labels and European and American companies were eager to get in on the action. Lancôme was the first major non-Korean brand to launch a cushion foundation in 2015. Amorepacific filed a lawsuit against South Korean ODM Cosmax in 2016 for violating its patent by making cushion foundations for Lancôme and Nars. The ongoing legal action did not deter other European brands from creating their own cushions, as YSL Beauty launched one in 2016.

It seems to be reaching its maturity stage in the product life cycle.

After Amorepacific lost its suit in 2018, the floodgates were open. La Mer, La Prairie and Sisley launched cloud foundation compacts that year.

Cushion foundation has “definitely become a ‘category’ in the makeup industry,” said Harry Park, director of South Korea-based online beauty retailer Akoco. “It seems to be reaching its maturity stage in the product life cycle.”

Though some of these brands sell air cushion foundation in the West, often these products are only put in front of Asian consumers. Nars, for example, invested heavily in promoting the sponges in China last year, but doesn’t sell them on its US site. Prestige brands are focusing on China as their next big market. Dior, Lancôme and Tom Ford launched cushion promotions ahead of the 11.11 online shopping festival in November. Lancôme purchased video ads on Douyin, the Chinese version of TikTok, that led the platform’s young users to its Tmall store to purchase its Absolue Cushion foundation, which is not available on its US site store.

Tom Ford has built multiple campaigns around air cushions in China since joining Alibaba’s Tmall platform last year, including a special-edition gold gift set with cushion foundation, lipstick and an eye palette for 11.11. The brand also hired Meng Meiqi of the popular idol group Rocket Girls 101, who received over 728,000 interactions on Weibo for one post about the gift set.

Making the jump to the US and Europe will require some additional legwork. New York-based beauty influencer Renée Chow says that the K-beauty industry tried to promote air cushions in the West several years ago, but they “somehow didn’t resonate enough to compete with traditional foundation formats.”

She notes however, that her own air cushion content was created four years ago based on “popular request,” and “people are still watching it.” Other major American beauty influencers to feature cushion foundation content include Michelle Phan, Manny Mua, James Charles, Jeffree Star, and Tati Westbrook.

Charlotte Cho, co-founder of Soko Glam, a K-beauty marketplace, said cushions have “immense potential … to become a hero product in the United States and Europe.” But she added that “limited skin tones” and non-USDA-compliant sun filters are potential obstacles.

The products’ relatively high cost and the need to change consumer behaviour to include on-the-go foundation touch-ups are other hurdles, according to Florence Bernardin, the founder of beauty consultancy Asia Cosme Lab.

Other concerns are sustainability and contamination of the sponge, which has spurred brands to adopt changes to products to make them more hygienic.

Cushion products will be an essential part of the new Avon portfolio.

There may be pent-up demand for the product in the West. Lancôme’s only recent posts about cushion foundation on its Instagram account were from November 2019, featuring its Teint Idole Ultra Wear cushion foundation that is listed as “phased out” on its US site. One video post is in Korean and features Korean celebrity Bae Su-ji, but multiple comments ask the brand to bring it back to the US. “Will this be available in the US? It was my absolute favourite one before it was discontinued,” says one user.

And while Tom Ford is focusing its cushion marketing mainly on China, the brand posted a photo of its cushion foundation on Instagram during New York Fashion Week earlier this month, stating that it had used it on models for its Autumn/Winter 2020 fashion show.

A range of cushion foundations can be found on US sites, albeit in smaller numbers: Sephora stocks versions by Amorepacific, Dior and La Mer, as well as cushion versions of other products including a cushion blush by Sephora-owned K-beauty brand Kaja, a fragrance by Chanel, as well as a sunless tanner and translucent blotting formula. Bloomingdale’s offers some of these brands alongside other Amorepacific labels, plus Bobbi Brown, Tom Ford and Saturday Skin.

So far, cushion foundations have followed the same path taken by BB cream, one of the first K-beauty products to gain broad popularity in the US. First introduced in America by Dr Jart+ in 2011, the product’s immense popularity inspired brands such as Clinique, Dior and Estée Lauder to launch their own versions. Today, virtually all US and European beauty brands sell some sort of BB cream. BB cream was just the tip of the iceberg, serving as the gateway into the K-beauty craze that led to 10-step skincare routines and all the products they entail.

BB creams took off because they “were first introduced as a more hydrating, natural, and skin-friendly alternative to the drying and heavy finish of foundations, making it easier to apply and use for mainstream consumers,” said Cho. 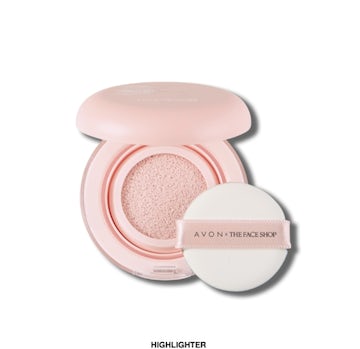 The US beauty market has also reached an era of “peak mask” after Korean sheet masks began appearing on the Snapchat and Instagram stories of celebrities en masse in 2016 and 2017. The market’s explosion has prompted a wide range of innovations, including an ever-expanding choice of ingredients and new materials like rubber or gold, personalisation and 3D printing.

One US brand that is doubling down on cushions is Avon, which was acquired by South Korean conglomerate LG H&H and has been undergoing a process of brand reinvention with multiple K-beauty partnerships. Its latest collaboration is with LG H&H’s The Face Shop, which includes cushion versions of not only foundation but also highlighter and blush.

“Cushion products will be an essential part of the new Avon portfolio,” said Susan Sterling, the colour marketing director of New Avon Company.

Cho has faith that there is still a place in the US market for cushion foundation. “I believe timing is everything,” she said.

In the past decade, cushion foundation has been “more in line with the Asian trend of dewy, no-makeup-makeup looks, while the US consumer focused on more contoured, heavy makeup looks.” But “that trend may be reversing now, with Korean women becoming increasingly interested in foundation and contouring, and American women less reliant on colour cosmetics, and looking for more fresh-faced, natural looks.”

Coty hires chief executive from Jimmy Choo. Pierre Denis will take the helm by summer 2020 upon the conclusion of the cosmetic group’s strategic review.

L'Oréal e-commerce sales rise in China this month. However, the cosmetics company is still bracing for a hit on demand due to the coronavirus health crisis.

E.l.f. cosmetics pays $27 million for clean beauty brand. W3LL People launched in 2008 as a toxin-free cosmetics brand. The move comes as E.l.f. looks to expand its brand portfolio and break into the clean beauty space.

Winky Lux expands via Target. The fast beauty brand will be in 1,868 Target doors by March 1, 2020. The move occurs as the mass retailer undergoes a countrywide revamping of its beauty department, with a particular emphasis on new layouts.

BlackRock buyout fund’s first European target is a perfume maker. The acquisition of Creed, a family-owned luxury fragrance maker, is part of BlackRock’s effort to build up its business in alternative assets.

Bath & Body Works expansion plans rattle some nerves. The company says that it will add a net 70 in the US this year, tripling the rate of new US store openings compared to the net 18 opened last year and net 27 in 2018.