The former SoulCycle instructor amassed a devout following, known as “Akin’s Army,” during his six-year tenure at the cycling giant. The group, hooked on Akman’s signature cycling and bootcamp methods, would follow the trainer around Manhattan to attend his sold-out classes.

In September, Akman opened Aarmy, a pop-up fitness studio mere blocks from some of his old SoulCycle haunts. Another temporary location opens in Los Angeles next week, with permanent spaces planned in both cities later this year, plus an app with on-demand classes and an apparel line.

Aarmy joins an estimated 50,000 to 70,000 boutique fitness studios in the US, according to ClubIntel, a fitness consultancy, a number that experts say has increased dramatically over the past several years. Wellness-obsessed consumers seeking “self-care” — preferably of the kind that looks good on social media — are flocking to instructor-led facilities offering an endless variety of classes without the commitment of a gym membership.

Boutique studios typically focus on one method, or modality, in an intimate setting that allows for a more personalised approach. That comes with a luxury price point: a boutique class in New York and LA cost can easily cost $35 (by comparison, a monthly membership at Planet Fitness costs $10). 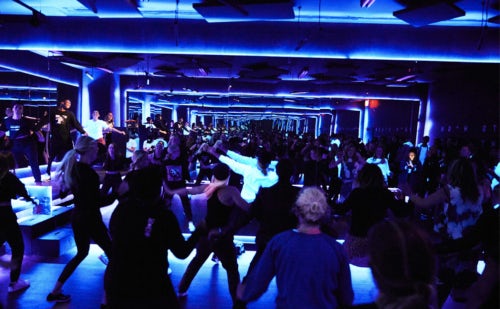 “The challenge is to get people into studios the first time,” said Michael Wolf, former global head of operations at fitness booking app Classpass and a consultant in the wellness industry. “But once someone gets into the boutique fitness environment you never want to go back.”

Pamela Kufahl, director of content at Club Industry, a fitness industry trade publication, links the rise of boutique studios to the maturation of Millennials, who now have the disposable income to pursue the personalised wellness experiences of their dreams.

“Studios provide more of an experience, more of a tribe feeling,” said Kufahl.

They also have low start-up and operating costs. Though cycling studios require hundreds of thousands of dollars in equipment, sculpt, dance or yoga classes need little more than a small space, mirrors, mats and lights.

“Sometimes all you need is a credit card and a space that used to be a radio shack and you're in business,” said Josh Leve, founder and chief executive of The Association of Fitness Studios, a trade group.

But though many boutique studio founders aspire to be the next Tracy Anderson, whose affiliation with Gwyneth Paltrow helped her celebrity soar, scaling a business built around small, personalised group classes is difficult. Most of these studios are marketing to the same set of wealthy urban Millennials. They rely on Classpass and word of mouth to find new clients, and hope the format convinces them to stick around.

Sometimes all you need is a credit card and a space that used to be a radio shack and you're in business.

But customers have their pick of pilates, yoga, sculpt, dance cardio, HIIT, bootcamp, barre and more. And though the right trainer can guarantee full classes, those star instructors can easily strike out on their own as soon as their profile starts to rise.

Read on to learn how a new crop of boutique studios plan to build long-lasting fitness brands:

Customer loyalty isn’t what it used to be

Designers don’t expect all of their customers to wear their clothes head to toe — and the same goes for fitness.

Aly Giampolo and Colette Dong, co-founders of The Ness, a 10-month-old studio that teaches rebounder (trampoline) and sculpt classes, said their idea of a “regular” client has changed since becoming business owners.

They once used the term to describe someone who visited a studio three to five times a week. Now, once-a-week visitors count as regulars, Giampolo said.

Instead of signing on with a single gym, many customers are cobbling together their own workout routines by visiting different studios, each specialising in its own niche exercise style.

“How much will that one modality of exercise satisfy anyone?” said Club Industry’s Kufahl. “If you’re just a boxing studio, or just a yoga studio or just a cycling studio — people like to vary their workouts and over time they’re going to want to experience a different type of workout.”

While a healthy portion of clients return weekly to attend class, there are still plenty who come to the studio three to four times a week, Giampolo noted.

It’s possible to build a business around a combination of once-a-week visitors and old school regulars. The Ness keeps its classes small — there’s often a waitlist for their 10-person sessions — and Giampolo and Dong make sure they get to know their clients, especially first-timers. 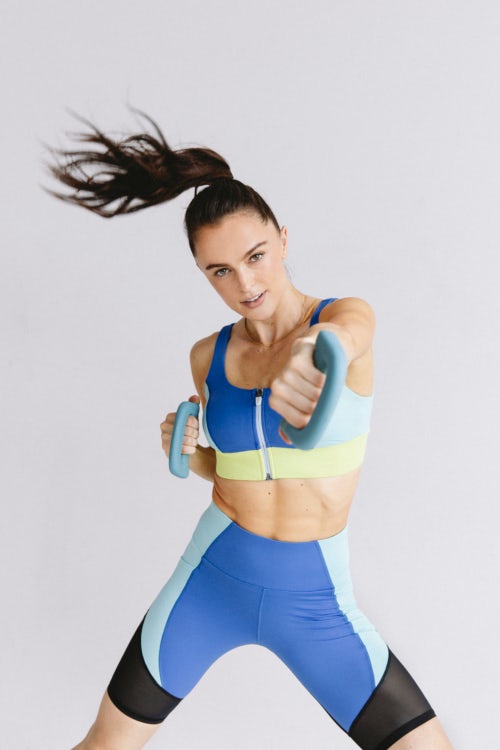 Megan Roup is the founder of dance cardio and sculpt method The Sculpt Society | Source: Courtesy

For studios trying to build awareness or fill off-peak classes, Classpass has become a powerful tool in bringing foot traffic into studios. The site launched in 2013 as a digital platform with two goals: to connect users with the hundreds of local workouts and to make boutique fitness more affordable. Users pay “credits” (which come out to approximately $2 each) for classes. The start-up has raised close to $250 million.

Not every studio founder wants to reach the scale of SoulCycle, which has approximately 100 locations. Many want to keep teaching and be involved in day-to-day operations, even as they add customers in new cities or even internationally.

“The vast majority of studios and their owners love the idea of practising their craft,” Wolf said. “They want to be successful businesses but becoming a global empire is not necessarily the goal of every studio.”

But as more people look online to satisfy their fitness needs, what constitutes a “global empire” is changing fast.

You really can accommodate everything in that lifestyle through one brand.

“That’s the magic of it ­— it’s creating those spaces where we’re not in isolation. We’re doing that with our phones already [isolating ourselves], we got that down,” Sudeikis said. Although studios will always be core to the experience — there are plans to open “multiple physical spaces” — introducing a digital expression of Forward_Space is key to future growth.

With its app and bicoastal locations, Aarmy looked to Glossier’s direct-to-consumer approach to retail for inspiration. The beauty brand built its community online, only later opening stores in New York and LA. 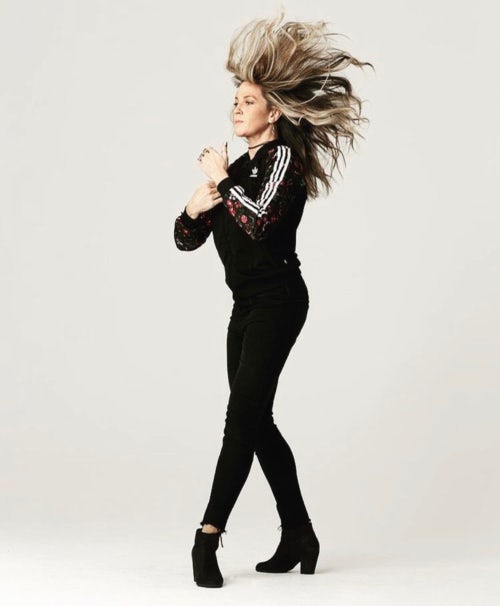 Kristin Sudeikis is the founder of Forward_Space | Source: Courtesy

“We don’t want to build a chain,” Laird said, adding that Aarmy will have “very few locations” in “key destination cities,” but those physical studios will exist mainly to help the digital operation reach critical mass. The app will cost $40 per month, just two dollars more than a single class with Akman or Angela Davis, his co-founder and fellow SoulCycle alum.

Some trainers don’t need a studio at all. Peloton, which held an IPO in September, reported $915 million in revenue in the year ending in June, including $181 million from at-home subscription cycling classes.

The Sculpt Society’s Roup has no plans to open a physical space to teach the dance cardio meets sculpt method. She leads classes at Project by Equinox and Energi (along with four trainers who teach her format), both in New York, and hosts private sessions as well as events across the country.

She also just launched the subscription-based The Sculpt Society App, where customers can, for $20 per month, or $119 per year, access classes taught by her. A library of quickie workouts, influencer content and four-week training regimens round out the service.

“When people think of dance-based fitness I want to be the first person/brand they think of,” said Roup. 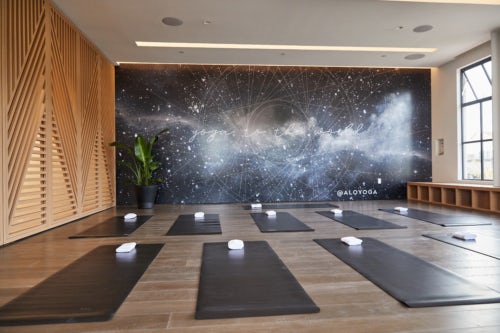 Athleisure brand Alo has yoga studios in all of its stores.

Think beyond the workout

Some boutique fitness studios were never intended to be primary exercise destinations at all.

Athleisure brand Alo’s five stores double as yoga studios, teaching up to seven classes a day. Additionally, the “studio to street” label introduced a $20 per month AloMoves yoga app two years ago, enabling consumers and clients to access their classes from anywhere.

“The studio is a thriving business on its own,” said Danny Harris, co-founder and co-chief executive of Alo. Single classes cost $25 each and an unlimited membership is priced at $150 per month or $1,500 annually. Stores are also equipped with organic cafes selling coffee, matcha and healthy snacks.

During a time when many brands are harnessing their efforts online, or closing stores altogether, Harris continues to invest heavily in the brick and mortar experience. He’s been deliberate in the integration of retail and wellness since opening the first Alo store in Beverly Hills almost four years ago.

“You really can accommodate everything in that lifestyle through one brand,” said Harris. “It’s almost like a full ecosystem.”

THIS WEEK IN BEAUTY
P&G acquired Billie. The firm purchased the direct-to-consumer women’s grooming brand for an undisclosed amount.

Beauty M&A will remain “steady.” Following a year of big deals from Elemis to Drunk Elephant, experts expect a handful of skin-care deals to take place this year.

Goop has a new retail partner. The skin-care brand founded by Gwyneth Paltrow will enter select Sephora stores next month.

Walmart is investing in its beauty offerings. The mass retailer will follow in the footsteps of Target, which has seen success with an updated beauty format.

Justin Bieber has Lyme disease. Bieber revealed the news on Instagram, where he also addressed having chronic mono.

Marc Rey talks long term growth. The president and chief executive of Shiseido Americas is confident that the market will come back after a “few tough months.”

Skin-care that smells bad might be a selling point. Some of the worst smelling products – including Biologique Recherche’s Lotion P50 – have the largest cult followings.