Visits to Sephora stores in Dubai and New York reveal just how global the beauty business has become - and some startling differences in how people shop.

Visits to Sephora stores in Dubai and New York reveal just how global the beauty business has become - and some startling differences in how people shop.

DUBAI, United Arab Emirates — It was 9:30pm on Thursday and the place was packed. It was loud, the lights were bright, and the crowd featured a cross section of customers in Western outfits and traditional abayas. No, it wasn’t a club; it was the Sephora at the Dubai Mall, reportedly one of the highest grossing of the beauty chain’s approximately 2,300 stores worldwide.

Even at this late hour, a swarm of women were sampling Fenty Beauty’s best-selling foundation, trying different highlighters to find their shade. Though your typical American mall would be closing around this time, the Dubai location’s black-clad staff still had a few hours to go (the store is open 10am to midnight Sunday through Friday, and until 1am on Saturdays).

Sephora had even opened up a space next door, with “favourites” from categories like skincare and masks displayed alongside top sellers and an events space that was turned over that night to “Prosper in Beauty,” a selection comprised mostly of multi-product sets from skincare brands like Estée Lauder, Shiseido, Lancôme, Caudalie and Origins. 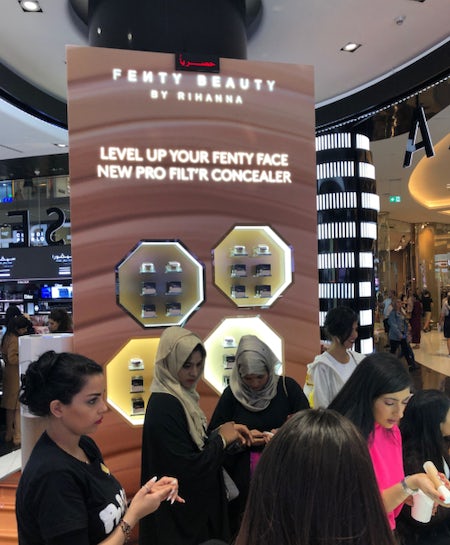 Sephora at the Dubai Mall | Photo by Rachel Strugatz

Back in the states, I visited the Sephora in Soho at about 5pm on a Sunday to compare the experience, crowd and product placement. I try to stop by beauty stores from time to time as a means to conduct research; I’ve found it’s the best way to take the temperature on what customers are really buying, as no one knows better than the people on the ground working the retail floor every day. Plus, a sweep of the store can show me which items are sold out (Huda Beauty’s palettes were ransacked in Soho).

The Soho store was by no means empty, but the crowds were a fraction of its Dubai Mall counterpart. The New York store was decked out with giant lips, hearts and interactive touch screens for Valentine’s Day, which was three days earlier (the Dubai store, which I visited on the holiday itself had no special decorations). One thing they had in common: massive displays for Fenty Beauty. Rihanna’s brand, created in partnership with Sephora parent LVMH’s Kendo division, is the store’s most popular, with all four colour families selling equally well, a sales associate told me. I suspect that’s the case in Dubai as well, though a sales associate there wasn't in the mood to answer questions after identifying myself as a reporter. Last month, LVMH chief executive Bernard Arnault said Fenty Beauty hit €500 million in sales in 2018.

In New York, Nars and Armani Beauty (for complexion) were runners-up as the most sought after brands, the associate told me. Another tidbit I learned from her is that Too Faced’s Better Than Sex Mascara was the best-selling single item in the entire store that day, which is often the case unless a splashy launch temporarily displaces it (a Pat McGrath lipstick trio sold 200 sets recently).

My takeaway: while it’s clear that Fenty Beauty is a global phenomenon, piquing the interest of American and Middle Eastern customers alike, the Sephora experience in each country felt markedly different. Dubai has a booming mall culture, a Canadian living in Dubai told me during my trip last week, where going to the mall is a popular evening activity. Because of strict laws surrounding alcohol consumption — non-Muslim residents need a permit to drink at home and in licensed venues — Dubai locals hang around until closing time, late into the night. The exact opposite is the case in the US, where malls are struggling and grabbing a drink at a bar is an evening activity of choice. Perhaps this is why the Sephora in Soho was clearing out by dusk. 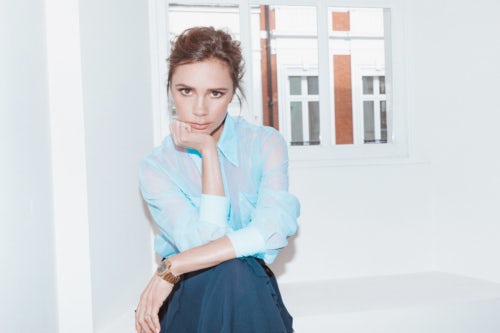 Victoria Beckham is launching beauty. The entrepreneur is launching her own digital-native beauty brand, Victoria Beckham Beauty, which will be sold through victoriabeckham.com as of this Autumn/Winter. Based in New York, the brand will be headed by co-founder and chief executive Sarah Creal, formerly head of global makeup development and marketing at Estée Lauder, where she worked with Beckham on the hugely successful Victoria Beckham x Estée Lauder capsule collections.

JAB offers to boost stake in Coty to 60 percent. JAB, already the largest shareholder in the cosmetics and fragrance maker with a 40 percent stake, said it would launch a partial tender offer to buy 150 million shares, just months after it appointed a chief executive and chairman who were associated with JAB. Taking a majority stake would give JAB more control over Coty, which has been grappling with supply chain issues ranging from hurricanes and trucker strikes to problems with integrating brands it bought from Procter & Gamble three years ago.

Amazon takes on QVC with live-streamed video. The e-commerce giant has launched Amazon Live, which features live-streamed video shows from Amazon talent as well as those from brands that broadcast their own live streams. The Seattle-based company has dabbled in live streaming in the past, with mixed results. Two years ago, it pulled the plug on its short-lived effort, Style Code Live, which offered a QVC-like home shopping experience. The live show featured hosts with TV and broadcast backgrounds, and brought in experts to talk about beauty and style tips.

Medical promotions are the latest Instagram influencer frontier. Pharmaceutical and biotech companies and Silicon Valley health startups see the opportunity Instagram presents and are increasingly using influencer-advertising as a way to increase their bottom lines. But by omitting or misrepresenting critical health information or failing to present multiple options for treatment, as a physician would do with their patients, influencers run the risk of leaving their followers with possibly dangerous, largely uninformed recommendations.

Sephora is recruiting a new squad of beauty influencers. The beauty retailer has announced that it's accepting applications for its 2019 #SephoraSquad, which it's calling "a different kind of beauty-influencer program." Those picked for the programme will be paid for their participation and will also receive free “hauls of products.” For social media users with smaller followers, being part of the squad means receiving coaching as well as exposure from Sephora. Applications are being accepted now through March 6.