Digital media and the rise of niche players have disrupted the makeup and skincare categories. Is haircare next?

Digital media and the rise of niche players have disrupted the makeup and skincare categories. Is haircare next?

NEW YORK, United States — A few years ago, Oribe co-founder Tevya Finger reached out to 30 of the brand’s loyal hair salon partners and asked them a question he never anticipated seriously considering: should Oribe, a prestige haircare line with tightly controlled distribution, sell on Amazon?

“There were 50 vendors already selling Oribe on Amazon that we didn’t sell to, which was highly frustrating for us,” says Finger, describing just a sliver of the product diversion problem that beauty brands in general, and salon haircare brands in particular, have long battled. The scale of the issue is hard to quantify, but a 2010 lawsuit estimated that $1 billion of professional beauty products are sold through unofficial channels each year. Amazon’s marketplace is fertile ground for unauthorised vendors, who undercut suggested prices and often sell used product.

“It was disintegrating all of the value that we tried to build in this highly curated brand,” says Finger, now the chief executive of Luxury Brand Partners, a firm with a portfolio of haircare brands including Oribe, R+Co and V76. The company sold colour cosmetics brand Becca to Estée Lauder last year for a reported $200 million.

Finger decided he would sell Oribe on Amazon if the company squashed the unauthorised sellers. His salon partners agreed and the reward turned out to be well worth the risk. “The sales are phenomenal,” reports Finger. Online now accounts for 35 percent of Oribe’s sales, a number that could reach 50 percent in three years.

Indeed, the partnership with Amazon marked a fundamental shift for Oribe, which also wholesales with other digital players such as Net-a-Porter, Beautylish and Birchbox. “It’s really changing the salon business in a big way,” says Finger.

To be sure, the rise of e-commerce, social media platforms and digital influencers have transformed the beauty business in more ways than one. But so far makeup and skincare have taken the lead, birthing an array of fast-growing new businesses and prompting a slew of billion dollar acquisitions. Haircare, by contrast, has been slow to change.

For one, consumers have a wider range of individualised concerns and, often, less styling knowledge when it comes to hair, making the salon — a trusted touchpoint where consumers routinely go for haircare — a natural place for product sales. And while images of hair colour transformations resonate on Instagram, a key driver of beauty sales, it’s much harder to see the impact of a de-frizzing oil, for example. 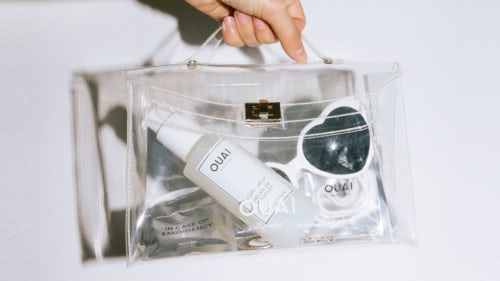 But luxury haircare — which, according to NPD, grew by 7 percent to $459.6 million in the US in 2016 — is ripe for disruption. “When you start asking questions about hair or how-to’s or what to do with products, there has been a wall and we are bringing down that wall, as well as some of the retailers,” says Andrew Knox, co-president of Ouai Haircare, a line launched by celebrity hairstylist Jen Atkin in 2016. “How do you bring fun into haircare?”

Investors and established beauty players alike are taking notice of the opportunity. Walker & Company Brands — a health and beauty company founded by entrepreneur Tristan Walker and focused on products for people of colour — has raised more than $33 million from Institutional Venture Partners, Andreessen Horowitz and others. On Tuesday, the company announced the launch of a prestige women's hair care line, Form. Function of Beauty, another high-end haircare start-up, raised a $9.5 million Series A earlier this year.

Meanwhile, the parent company of DevaCurl — a salon founded in 1994 with expertise in curly hair that has since expanded into a product and tool line — was acquired by Ares Management in May. In December, Unilever made headlines when it announced the acquisition of venture-backed haircare start-up Living Proof, founded in 2004 and known for its patented formulations, for an undisclosed sum.

“There are fissures that exist in the business now. People have to start to reinvent how they think about selling product and where the important inflection points are, and influences are,” says Melisse Shaban, former chief executive of Frédéric Fekkai and current chief executive of Virtue Labs. The new direct-to-consumer haircare line features human keratin instead of the processed animal keratin that is standard in the cosmetics market. Shaban was initially skeptical of another “ground-breaking technology” but she saw the product worked wonders on damaged hair. The ingredient is expensive to make: Shaban says it accounts for 40 percent of the total cost of Virtue Labs’ goods, which are more than double that of comparable products, and that she hopes to lower prices as the company scales.

Embracing direct-to-consumer has helped Virtue Labs control the way it markets its products, amplified by celebrity hairstylist Adir Abergel, who joined as creative director in January. “We’ve seen it in other categories of beauty, some successful some not, but consumers need to lead the charge,” says Shaban. While she thinks the relationship between salon and customer will always be valuable, “we don’t need to have an intermediate anymore.”

“It’s a whole other ballgame now,” says Victoria Hunter, who co-founded New York’s Whittemore House Salon with Larry Raspanti in 2009. “The only person that’s actually buying product, it’s only for convenience sake when they are in the salon, but no one is going to be making a trip to actually get product.”

LVMH’s multi-brand beauty retailer Sephora has invested in an arsenal of guides and how-to content to help customers that “were really struggling to find best products for their specific concerns,” says Artemis Patrick, senior vice president of merchandising at Sephora. Its haircare offerings have expanded rapidly since the retailer started carrying Bumble & Bumble in 2011. “Our clients are really interested in haircare brands that offer the whole package, so that’s effectiveness, high-quality formulas and beautiful and modern packaging," she says. "We really start to highlight these niche brands and products more overtly through stores and online… very similar to makeup.”

But unlike other beauty categories, haircare products can’t get by on smart marketing alone. “It’s is one of those categories that if it just doesn’t hold up, people don’t use it,” says Shaban. “When you can marry the two aspects of great product and great digital marketing, you’ve got a shot.”

When it comes to great digital marketing, look no further than Ouai, founded by celebrity hairstylist Jen Atkin. Known for her work with the Kardashians and Hadids — documented for her 2 million followers on Instagram — Atkin launched the approachable, easy-to-use haircare product and supplements line last year with partner Dr. Lamees Hamdan. “I noticed that there was a major hole in the marketplace,” says Atkin, describing her desire to create a brand that looked like luxury but was affordable and had simple packaging and a relatable marketing message. “We are not the kind of brand that plans our product and messaging in advance… we want to keep our finger on the pulse.”

When you can marry the two aspects of great product and great digital marketing, you’ve got a shot.

Atkin enlisted industry veterans Deanna Kangas and Andrew Knox as co-presidents and the line launched on Ouai’s own site in February 2016 before expanding to a limited selection of Sephora doors one month later. It quickly became one of the retailer’s top five haircare brands. “We knew there were tremendous growth opportunities with certain channels and retail partners out there,” said Kangas, explaining the decision to go wholesale. (Kylie Jenner’s blockbuster cosmetics line, for example, is only available on her website.)

Ouai has since expanded to 300 Sephora locations, as well as Nordstrom, Urban Outfitters, Space NK and Barneys New York. In September, Ouai will be available in every Sephora location. And despite not planning to go international before 2017, the brand opened accounts in the UK just three months after launch and is now available in Australia, Canada and the UK, with plans to reach Dubai and Singapore this year.

Subsequent product launches, including a dry shampoo foam, were born from consumer feedback through Instagram, brought quickly to market through Kangas and Knox’s close relationships with manufacturers and retailers. “We try to be as fast as we can when we are crowdsourcing,” said Atkin. (The supplements, a top-seller, took over two years to develop, however.) “We’ll find out what product people are really loving or what people really want,” she said.

Once a product is developed, Atkin can get the word out directly on Instagram and YouTube. “Because of our social media following, we have Jen, we have different people doing how-to [videos] and it’s very effective,” said Knox. Tutorials and how-to videos are key to Ouai's strategy — retailers are constantly asking for more — as are a network of in-store “educators” who show consumers how to use the products. Of course, social media influencers are also key. “We partner with them and they give us user-generated content,” says Knox, clarifying that Ouai does not pay its roster of influencers, who often have around 100,000 followers — unlike the millions of followers amassed by the major players — and who are interested in working with more haircare brands in order to expand their own coverage.

“Hair is up there with makeup in terms of the impact of influencers and videos and tutorials and YouTube… which is why you’ll see us really building out our content,” says Sephora’s Patrick. Pillar brands for the retailer include Living Proof, Drybar and Bumble & Bumble. Newer niche brands now gaining traction include Ouai, IGK, Verb, Madam C.J Walker and Vernon François.

“It is now a new brand world,” says Finger. "Twenty-five years ago, salons and retailers were the arbiters of brands, explains Shaban, “Now the brands that are sold at a certain retailer lift up the retailer, versus the other way around.” For prestige consumer haircare brands, the runway for growth is still long.

“We are on the cusp of what hair can be in the next three years,” says Ouai’s Knox. “Our partnerships are on track,” adds Kangas. “It’s about keeping up with our promises and our momentum.”

The Top 15 M&A Targets in Beauty