Isamaya Ffrench: ‘It's Quite Empowering to Transform Yourself’

How the avant-garde makeup artist is changing the face of beauty with her conceptual and performative approach. 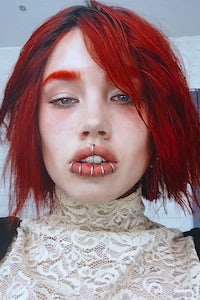 Isamaya Ffrench: ‘It's Quite Empowering to Transform Yourself’

How the avant-garde makeup artist is changing the face of beauty with her conceptual and performative approach.

LONDON, United Kingdom — Isamaya Ffrench, 26, is changing the face of beauty with her uniquely conceptual and performative approach. We’re on an editorial shoot with Theo Adams, the high-camp performance artist and long-time creature of mid-2000s London club culture, and Ffrench is wearing her war paint: a matte scarlet pout and rosy eyelids, a riff on Hollywood glamour. “Madame Butterfly” is blasting in the background and Adams is not far away in a black jumpsuit, giant hoop earrings and a hip-skimming raven-wig.

Ffrench first met Adams while working as a face-painter at children’s parties. She had grown up ballet dancing and high-board diving, and he invited her to perform with his subversive troupe. Soon, she began attracting attention for her conceptual and performative approach to her own makeup.

Her first official beauty gig was body-painting on a shoot for British style bible i-D. “There was another makeup artist doing actual makeup and our kits were so vastly different,” she laughs. “I was washing acrylic paint off my brushes and she had her beautiful MAC products neatly lined up and I remember thinking, ‘God, your job is so much easier than mine.’” Ffrench began teaching herself how to do makeup properly — “I basically cowboyed it!” — referring to Kevyn Aucoin’s seminal 1999 book “Making Faces” and experimenting on herself.

What distinguishes Ffrench more than anything is the way she uses her own face as a canvas. She stars in many of her projects, drawing comparisons to the artist Cindy Sherman. “It’s quite empowering to transform yourself,” she says.

Ffrench’s work is rooted in a powerful, almost cinematic sense of storytelling and character development. “I like my images to carry a narrative because I’m not selling a product,” she says. “I have no desire to sell a product. I like selling an idea or an experience or an emotion.” Perhaps it’s no surprise that John Galliano is her favourite designer. “You’re compelled to find out who these characters are and that’s more interesting than just a flat image. I always do character development, right down to where they buy their cigarettes from. You build a world around it to tell a story... I’m not really afraid of ugly stuff because it’s real — you have to have shadows to show the light.”

I’m not really afraid of ugly stuff because it’s real — you have to have shadows to show the light.

Today, the business of beauty has been reshaped by digital media and beauty-themed image editing apps like Meitu. A face can be infinitely filtered; eyes exaggerated to cartoonish proportions; lips plumped and flaws smoothed over. We can be a bunny in a cotton-candy cloud one minute and a doe-eyed, tongue-swinging puppy the next. YouTube tutorials dissect the tricks that were once the preserve of professionals with millions of viewers who want to master the art of the age-old self-portrait with contoured bones and light-reflecting brows. “Suddenly, the whole world can be a makeup artist,” she says. “I’m interested in how we can change our understanding of what a beauty tutorial actually is.”

Cambridgeshire, England-born Ffrench — who insists her lineage is simply Irish, despite the exotic-sounding name — has managed to blend her avant-garde editorial work with commercial success, working on campaigns for the likes of Tom Ford Beauty and YSL Beauté. But Ffrench’s work for big brands is unconventional to say the least.

At Tom Ford Beauty, she has created powerful character studies using prosthetics, wigs and transformative makeup. There’s the cult leader on trial, hounded by paparazzi; the crystal-dripping showgirl; the elegant older lady with a plastered aquiline nose — all subversive riffs on classic Ford-isms, from cinema to glamour to the customer herself. “When you work with a brand, you’re essentially working within a set of parameters or codes or an ideology,” says Ffrench. “I’ve always been fascinated by taking the brand’s codes and breaking them down and subverting them into something I can put my creative stamp on.”

One can’t ignore the sense of satire that permeates Ffrench’s work and that her creative interests stretch far beyond the usual parameters of fashion and beauty. “Ffrench Pharma”, a 2016 collaboration between Ffrench and East London restaurant Bistrotheque, was a latex-gloved edible cosmetics dining experience that played on the more sinister extremes of present-day society’s increasingly clinical beauty obsessions. “It’s about the consumeristic side of beauty,” Ffrench says of a menu she devised that featured (bot)ox cheeks pierced with syringes of jus, celeriac face scrubs, scallop mousse encased in a compact, spicy chocolate lipstick and candy pills. “It’s about assuming a pill will make you beautiful.” The culinary twist reflects Ffrench’s interest in food. She trained under a Michelin-starred chef as a teenager and even appeared on MasterChef, a competitive cooking reality show.

Ffrench has the kind of wide-ranging interests that are symptomatic of the multi-disciplinary tendencies of her generation, but her work is coupled with a much deeper and rarer sense of true creativity, technical prowess and thoughtfulness — and that’s something that can’t just be performed.

Has Backstage Beauty Lost its Gloss?