LONDON, United Kingdom — Lisa Eldridge moves quickly and quietly, her bristle brushes and eyebrow pencils, shadows, serums and powders all ready and in order. Her gentle voice flows as she begins to apply a Fusion Beauty smoothing concealer across her face. Eldridge is creating a look for her YouTube channel, where she has amassed over a million followers. This tutorial, entitled the “'No MakeUp' Look Tutorial,” is currently one of her most popular videos, with over 2.3 million views and 28,000 likes.

Known for her fresh, relatable and understated approach to beauty, Eldridge is a YouTube sensation. She is also one of the fashion industry’s top makeup artists, who has painted the faces of A-list actresses like Kate Winslet; worked with photographers like Patrick Demarchelier, Mert and Marcus, Paolo Roversi and Mario Testino; and, in January 2015, was appointed creative director of makeup at French beauty house Lancôme.

Eldridge first took an interest in cosmetics — long before the rise of online video — when she discovered her mother’s box of makeup, filled with finds from Mary Quant and Coty. “I didn’t want to put it on my own face, but I loved drawing with it. The tubes, the glosses, the gloopy stuff, the colours and the smell. All of it was really captivating,” she said.

Her interest in makeup deepened when a family friend gave her a book about stage makeup on her 13th birthday. But breaking into the beauty business did not come overnight. “It took ages to figure it out. I couldn’t find any makeup courses related to fashion,” said Eldridge. So she began by taking a course in theatrical makeup in costume design. Eventually, she enrolled at Complexions, an artistry school in London offering lessons in editorial makeup, hair styling and prosthetic application.

“It was cool because you only went in the evenings. There’s nothing like it today, which is a shame, because it closed down years ago. It’s not one of those slick schools. In fact, it was a really funny place, but a lot of makeup artists have gone there.” Indeed, former students of the institution include Jeanine Lobell, founder of American cosmetics company Stila, and Tiffany Hicks, who famously created Michael Crawford’s look for the musical Phantom of the Opera.

During the day, Eldridge worked on a makeup counter at Harrods. “It just happened to be Lancôme, which is funny because now I’m the creative director. The best part was that you would get an allowance [on cosmetics], which meant you could order five powders in different colours. By the end, I had a makeup kit.”

But Eldridge soon left London for Milan. “It was a really good place to be because so many new models were starting their careers there. There were lots of photographers there too.” By the end of her trip, she landed her first editorial gig. She returned to England three months later and was quickly taken on by an agency called Debbie Walters, who also represented hair stylist Guido Palau and makeup superstar Mary Greenwell.

Eldridge’s first big break came when she was booked by Elle (UK) to work with Cindy Crawford, an opportunity that allowed the makeup artist to quickly build up her reputation. “I did a really good shoot with David Sims in Paris for The Face, with Amber Valletta on the cover. Guido did the hair,” she said. “Bit by bit, I got better jobs and better photographers.”

Eldridge began travelling regularly for photo shoots, fashion shows and advertising campaigns, working with Chloé, Gucci, Prada, Donna Karan, Moschino, Yohji Yamamoto, Pucci and others. Her work appeared on the pages of the British, Italian, French, Chinese and Japanese editions of Vogue, Love, Allure, Glamour, i-D, Harper's Bazaar and Lula. She also became a makeup guru to some of the world’s most high profile actresses. “One of my most memorable jobs was definitely the first Prada perfume campaign,” she recalled. “It was with Jordan and Ridley Scott. We went to Berlin for a week and we shot Daria [Werbowy] wearing all the key pieces from every Prada show. Miuccia herself was there. It was incredible.”

In 1998, Eldridge teamed up with Japanese cosmetics company Shiseido. “They wanted a makeup artist to design a new range for the Asian market. At that time, I’d only been doing makeup on shoots. I’d never done new product development, but I had an idea and a concept. I went to Tokyo to present my idea to about a hundred people. They loved it and they gave me the green light to produce a makeup range from scratch. It was a really steep learning curve. I worked on the packaging, I did the copywriting. I learnt all of that on the job.”

But Eldridge made perhaps the biggest career move of all when she launched her website and YouTube page in 2010, becoming one of the first professional makeup artists to create online beauty tutorials. “I had watched people like Lauren Luke who had a really popular YouTube channel. She was just a normal girl who would put all this colourful makeup on, while her two dogs were snoring in a basket. I thought it was so authentic. It was far more powerful than anything a brand could deliver.” But what spurred Eldridge to start her own channel was seeing video bloggers starting to offer advice on how to recreate the beauty looks worn by celebrities. “I thought, well, I did that celebrity’s makeup, so I can show you how to really create the look!”

A lot of people want to set up a YouTube channel so they can make money from advertising. It’s not right for me.

At the beginning, Eldridge was uncertain how the fashion world would respond. “I thought people in the industry might look down on it. I worried that people might not work with me anymore because of my YouTube channel,” she said. But the move paid off. Eldridge has since amassed over 1 million subscribers on YouTube. Just over six months after the launch of her channel, Eldridge was approached by Chanel to collaborate with Peter Phillips, then the company’s cosmetics creative director, on a stream of online makeup videos.

Shot in front of a simple white backdrop, Eldridge’s beauty tutorials range from handy tips for covering blemishes to looks for a range of real-life situations, such as ‘meeting the ex,’ which has become one of her most popular videos, garnering over 1 million views and 22,000 likes to date. “I had no idea if people would like those ideas or not. ‘Meeting The Ex’ was inspired by a job I did the week before with a Victoria’s Secret model. You can imagine how gorgeous she is, yet she spent the whole week worrying about having to meet her ex. We planned everything together; her hair, makeup, what she would wear, what she would say. I thought, ‘She’s like a goddess. If she’s worried, there’s no hope for the rest of us. This needs to be discussed online.’”

Eldridge’s extensive online fanbase — the majority of whom are college girls in America in their twenties — has been acquired organically. “My following has grown one by one. I had to rely on people to tell their friends and sisters about me. The advantages are that there aren’t people on my channel who shouldn’t be there. I’ve been lucky so far not to get trolls. What’s nice is that there’s a real community now. They talk to each other and they’re people who want to talk sensibly about makeup. I don’t get random comments from people who just want to talk rubbish on the Internet.”

Her fans have taken to using the hashtag #MyLisaLook. “I’ve seen that on Pinterest and other social media sites,” beamed Eldridge. “Thousands and thousands of girls will take one of my looks and make it as their own.”

For all the technical information and practical advice that Eldridge offers, her main draw is her unyielding honesty. “The comment that I get time and time again is ‘I trust you.  You recommended it and I bought it,’” explained Eldridge, saying she would scrap a video, even if it was already filmed and edited, if she found out that a product she’d used in it didn’t live up to expectations. “I’ve always been cautious about that. I don’t ever want to have to dumb down or be fake.”

Indeed, Eldridge is adamant about safeguarding her integrity. “I didn’t start doing videos to make money out of them. To this day, I’ve never made money off YouTube, I’ve never sold advertising and I’ve never done sponsored videos,” she insisted. “When YouTube started to be monetised, I’d watch makeup videos that would have a dog food commercial before it. I even saw one for yeast infection. I don’t want these kinds of ads before my videos. Today, a lot of people want to set up a YouTube channel so they can make as much money from advertising. I’m not against people making a career out of that, but it’s not right for me. 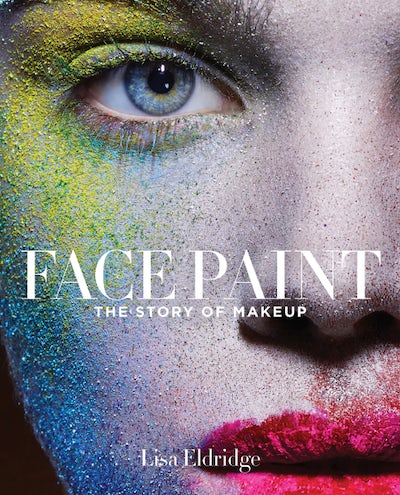 Eldridge is the author of a new book, Face Paint: The Story of Makeup, to be released this October. “Whether you’re a makeup artist yourself, a student, an office worker — it doesn’t matter! After reading this book, you’ll never look at your makeup bag in the same way again," she said. "It looks at themes of beauty from 40,000 BC to the modern day, as well as the business of beauty, which only started over a hundred years ago. You’ll get your lipstick or mascara out and you’ll think, wow, the history behind this item is so interesting.”

Eldridge is also working on developing a range of new and limited edition products for Lancôme, some of which are inspired by a recent trip to Seoul. “At the moment I’m massively inspired by Korea. We’ve just launched a cushion foundation at Lancôme, which is definitely inspired by what I saw. In Asia, they really like this idea of portable cushion foundations that are in compacts. It’s a liquid foundation but it comes inside a cushion. The idea is that you pat, pat, pat until you build up a dewy-skin look. We’re the first Western brand to launch this concept.”

And, while she has yet to draw up concrete plans, Eldridge says she aims to launch a namesake beauty line. “I’m confident that I can come up with something very original and different."

“I don’t think you can ever look at it as a career where you want to make lots of money and it’s glamorous,” said Eldridge, looking back at her rise. “I can always spot those people. They get too dressed up and they just hang around. You don’t get dressed up doing makeup. You’re on your hands and knees, putting body paint on. It has to be a passion, a real interest.”

Editor’s note: This article was revised on 6 July 2015. An earlier version of this article misstated that Eldridge became a makeup guru to high profile actresses following the launch of her YouTube channel. Eldridge had been working with several A-list celebrities prior to starting her channel. The article also misstated that Eldridge worked on a Prada perfume campaign in Prague. It was in Berlin.