LOS ANGELES, United States — Though Jen Atkin — entrepreneur, influencer, Kardashian-Jenner-Hadid bestie — seemingly burst onto the scene just a few years ago, the LA-based hairstylist has certainly paid her dues, becoming a savvy businesswoman and a chief executive along the way.

Atkin began her career assisting editorial and red carpet hair gods Danilo, Renato Campora and Andy LeCompte, and further honed her craft on the teams of masters Guido Palau, Orlando Pita and Bob Recine backstage at the shows. She was among the beauty industry’s first to recognise (and monetise) the power and potential of social media, building her own influence and authority as she chronicled that of her starry clientele.

Atkin launched Mane Addicts, a digital playground and community for all things hair, in 2014, creating a platform that everyone from brands and stylists to consumers could use. In 2016, she launched Ouai, the digitally native haircare brand sold at Sephora, Harrod’s and Net-a-Porter, which recently expanded into fragrance and bodycare. She is also an ambassador for Dyson, visiting their labs every six months to help their engineers create “tools for the everyday girl to do her hair.”

Now you don’t really need a portfolio, if you have celebrities.

She has collaborated with companies across a variety of industries, from Summer Fridays and Off-White to Alfred Coffee, Vanderpump Dogs and the luggage company Calpak, for which she recently created a capsule collection, including a trunk designed specifically for hairdressers. And she’s just getting started.

Best Decision: Trusting Herself — and Tuning out Bad Advice

Part of what made it possible for Atkin to come out of the gate strong and as an authority in her space has been her masterful use of social media and the all-access pass she gave her now 2.8 million followers to life behind the scenes with clients like Kendall Jenner and Bella Hadid. She wisely capitalised upon the moment reality stars transitioned from tabloid curiosities to sought-after A-listers and directional trend-makers (and brand-makers) in their own right.

But what seems de rigueur today was a novel and, to some, risky move when Atkin was first beginning. Building her base, and her business, required bypassing the day’s conventional — and it would be shown, outdated — wisdom, which dictated the traditional channels one should navigate to have a successful career as a top hairstylist.

“The best move I made was to not listen to my former agent who told me eight years ago that working with reality stars would be the end of my career. Thank God I didn’t listen,” says Atkin, who leap-frogged past many of her contemporaries as a result of her vision and resolve. 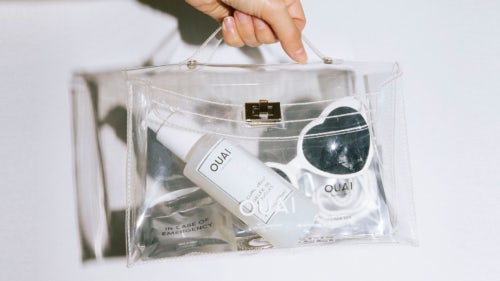 “I really liked them [reality stars], as women, and enjoyed spending time with them,” she explains. “We pretty much grew up together. Kim [Kardashian], especially, is the first celebrity to ever credit her glam team. She started the trend of tagging us on Instagram. Throughout my career, the [Kardashian-Jenner] sisters have always shared their platform with me and helped me to grow my own platform. At the time, no one was doing that,” she recalls. “It’s been so helpful to our industry. Now you don’t really need a portfolio, if you have celebrities. That’s what pushed me to the forefront.”

“I never used to have female assistants,” says Atkin. “I insisted on having boys because I was afraid that women were going to be too emotional, fragile. And you can’t be fragile. Hairstyling has always kind of been a boy’s game. My first female assistant was Justine Marjan [now an influencer and brand founder in her own right], and I realised by hiring her that women are such incredible multi-taskers. We got ten times the amount of work done than with the boys!

That’s something I regret not doing earlier — trusting that women could carry heavy luggage, keep up with the travel schedule and not lose their minds,” she says. “In my industry, it was hard for me at first to get a job. I only had Sally Hershberger and Odile Gilbert to look up to. I was a part of the problem myself for not putting faith in girls. So I regret not doing that earlier.”

At Ouai, Atkin’s vice president of sales and director of marketing are both women; earlier this month, she brought on Laura Bernthol, formerly of Freeman Beauty, as chief marketing officer. This past September, Atkin — who remains chief executive of Mane Addicts — passed the Ouai chief executive baton to Colin Walsh, a L’Oréal veteran and previous DevaCurl chief executive. “Now my team is over 75% women, from the Ouai office to my hair team to Mane Addicts,” she said.