In an industry once ruled by polar opposites — the cheap and the extravagant — a growing number of entrepreneurs are making upscale manicures more accessible.

In an industry once ruled by polar opposites — the cheap and the extravagant — a growing number of entrepreneurs are making upscale manicures more accessible.

NEW YORK, United States — When Tenoverten founders Nadine Abramcyk and Adair Ilynsky opened their first nail salon at the end of 2010, they were not beauty industry insiders. The two friends simply wanted more out of their weekly manicure. While the prices at most New York City salons were criminally low, they found the customer experience lacking. Harsh fluorescent lighting, generic worn furniture and tools that looked far from sterile were the norm. “We started this list of things that we would change if we could open our own nail salon,” Abramcyk recalls.

They outfitted Tenoverten with sleek modern countertops, clay bowls and a polish selection that included Chanel, RGB and Nars. Abramcyk, who owned the hip West Village clothing boutique Mick Margo, and Ilynsky, who worked in finance at Coach, were tipped off about a space in Tribeca and raised funds from friends and family in order to get the operation going. Prices are reasonable: $25 for a standard manicure and $40 for a pedicure, which puts them right between the cheap corner shops — which sometimes charge as little as $7 for a polish job — and the high-end spas, which can get away with charging $50. (The average cost of a basic manicure in the US in 2014 was $19.54). The nail technicians, who the duo found mostly through an open call, were guaranteed a fixed base pay every week (many salons cut hours during slow periods). The resulting sense of financial security has created employee loyalty: over 20 of the salon’s original technicians are still with the company. 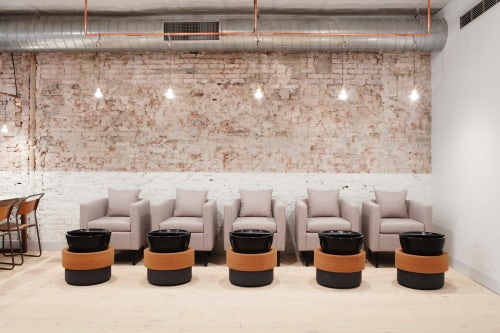 Nearly six years later, Tenoverten operates four salons in Manhattan and will open their fifth, this January at the South Congress Hotel in Austin, with plans for more Manhattan salons and a West Coast outpost on the roadmap. Just a year after opening the Tribeca location, the company launched its own polish and nail care collection, which is sold at stores such as J.Crew and Sephora and currently makes up about 12 percent of overall revenue. In 2015, the company’s turnover was $3.3 million and is projected to nearly double to $6 million in 2016. However, Abramcyk and Ilynsky have greater ambitions and are in the midst of searching for a financial partner that can help them scale the business.

To be sure, Tenoverten is just one example of the transformations that have reshaped the business of nail salons in the past decade. A growing crop of stylish, well-appointed salons and services are making a manicure as accessible as Drybar has made the blow out. Indeed, there were nearly 54,000 nail salons open in the US in 2014, up almost 10 percent from the year previous, according to industry publication Nails magazine. The upstarts range from Olive & June, the Los Angeles-based string of salons that target the city’s creative class, to Manicube, a mobile service that boasts more than 250 corporate clients. (In November 2015, Manicube was acquired by upscale chain Elizabeth Arden Red Door Spas.)

Glamsquad, the mobile beauty service, best known for at-home blowouts, added manicures to its New York City menu in May 2015. Today, 10 percent of the business is nails, but the company predicts it will soon rise to 25 percent when it begins offering the service in Miami and Los Angeles. “Our clients are time-starved women who don’t always have time to get a quick manicure,” says Glamsquad co-founder and chief executive Alexandra Wilkis Wilson, one of the founders of Gilt Group. “At the end of every service, we provide our clients with a survey and we kept hearing from them that they wanted us to offer nail services.” Group events, too, are a major element of the business.

At Olive & June, which has two outposts in Los Angeles area and is about to open a third in Santa Monica, California, manicurists are also requested on film and television sets by actresses who have visited the salon. “Initially, I was surprised by the on-set work,” says owner Sarah Gibson Tuttle. “I think the opportunities have to do with the fact that we emerged early on as a brand, and not just another nail salon.” Gibson Tuttle, who worked on Wall Street for a decade before moving to Los Angeles and funneling her own capital into the first location, is meticulous about the company’s aesthetic. She hired a branding agency to design the logo and enlisted hip Los Angeles interior designer Brady Cunningham — who also co-owns Melrose Avenue retailer Tenoversix — to outfit the space with modernist furniture from Blu Dot in the clay colours of the 1970s. The chic interiors attracted early attention from the press and, in turn, new clients. Within months, the salon was cash flow positive.

While it’s not entirely surprising to see a new breed of spiffed-up but accessibly-priced salons and services emerging in New York and Los Angeles, experts believe the trend is much wider. “We will continue to see these really cool, well-designed nail salons pop up over the next few years, mostly in metropolitan and mid-sized cities,” says Nails associate publisher and editor Erika Kotite. “The continued growth at the modestly-priced end of salons is enough to really merit attention.” Indeed, while year-on-year sales of nail polish are virtually flat — totaling $1.1 billion in the US in the 12 months ending September 2015, according to NPD — the market for professional nail salons and services is growing. Karen Grant, NPD beauty analyst, believes it has to do, in part, with growing interest in service experiences: “Pampering is increasingly important. They’re going for things that make them feel good. Salons offer an experience.”

Anecdotal evidence of a surging market is everywhere. “I’ve been approached by no less than three different individuals that plan on opening salons in second-tier [US] cities,” says Manicube co-founder Liz Whitman. “They’re targeting those who are willing to pay a higher price for higher quality.” The numbers reflect the trend, too. In 2014, Americans spent $8.54 billion on nail services, up 14 percent from $7.47 billion in 2012, reports Nails magazine. 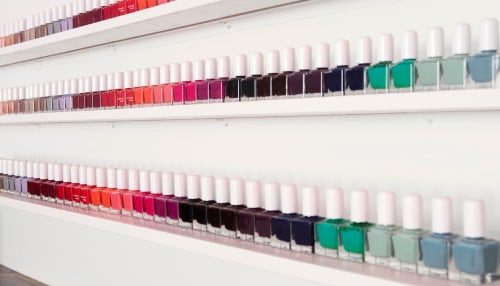 Yet-to-be published 2015 numbers will likely be spurred on by a damning May 2015 exposé in The New York Times, which revealed the ill treatment — from docked pay to physical abuse — endured by the city’s lower-end manicurists. (Reporter Sarah Maslin Nir interviewed more than 150 nail salon owners and workers for the story. Out of the over 100 workers she interviewed, only 25 percent said they were paid at or above the legally mandated minimum wage.) In a survey conducted by Nails, 30 percent of respondents said that reading the article affected how they felt about going to a nail salon. What’s more, 22 percent of nail salon owners said they felt like the piece made their business appear better in the eyes of the pubic. “It was a kind of a foil for them, in a sense,” Kotite says. At Paintbox, a salon in New York’s Soho that specialises in runway-inspired nail art, bookings doubled the week after the article was published. “We came out with a statement about how we do things differently,” says Paintbox founder and chief executive Eleanor Langston, who worked as a beauty editor before opening the salon in May 2014. “It was huge for us.”

When Elizabeth Arden Red Door Spa chief executive Todd Walter was on the hunt to acquire a digitally-savvy salon service during the summer of 2015, he found Manicube’s above-the-board employment policy to be one of the company’s biggest selling points. “Whereas a lot of these other players are using independent contractors, Manicube was ensuring that 100 percent of its employees were W2 employees,” says Walter, referring to the form that US companies must use to report wages paid to official employees. “It fits very much into our core philosophies.”

And yet, as these businesses expand, it’s fair to also consider the limits to their growth. For mobile services like Glamsquad and Manicube, growth has, thus far, come largely through category expansion. (Glamsquad’s bread-and-butter is blow-dries, while Manicube has ventured into men’s grooming.) For physical salons, expanding into product is the traditional avenue to growth. For example, venture-backed nail polish line Julep began in 2007 as a small chain of Seattle-area nail salons. When the recession hit, founder Jane Park pivoted the business model, refocusing on product. She has since raised $56 million in funding from the likes of Andreessen Horowitz and Jay Z.

The UK-based polish bar Nails Inc., which operates around 60 nail bars in department stores around the country generates over £20 million pounds a year, although 60 percent of that comes from polish and other product sales, not manicures. Founder Thea Green expects products — including hand and leg skincare — to make up 70 percent of revenue as the company expands its distribution of its products in the United States. Green says that the product opportunities not only come from increased wholesale distribution, but also conversion at the manicure table. “The relationship between products and services in the nail industry is stronger than it is in hair,” say says. “You can go to your hair dresser and you don’t necessarily by a hair product. At our nail bars, people want colour to top it up." While overall polish sales aren’t increasing right now — largely due to an influx of options introduced over the past five years, from out-there colours to long-wearing gel formulas — Grant says that there is more potential in the prestige and niche categories. New polish innovations such as Nails Inc.’s Spray Can — a spray-paint like polish that sold out within weeks after being introduced for the holiday season — will likely move the needle as well.

But there are also other, less-obvious opportunities to capitalise on the growing interest in nail care. For instance Olive & June’s Gibson Tuttle plans to launch a YouTube channel, which will feature tutorials. “It’s limiting in some ways to only have a salon,” Gibson Tuttle says. “We’re trying to make sure that as many people as possible know who we are.