LONDON, United Kingdom — On top of her morning bowl of oatmeal, Caroline Gogolak sprinkles acai berries, beetroot, carrots, shiitake mushrooms, barley grass, wheatgrass, kelp and a handful of other alkalising super greens. As co-founder and president of the New York-based activewear company Carbon38, Gogolak has a demanding routine and likes to keep her meals simple, which is why she is ingesting this list of ingredients (and many more) in the form of a dissolvable green powder. It costs £62.50 (about $98) per 300 grams and promises, at least implicitly, to give her the looks of Elle Macpherson, the 51-year-old supermodel behind this Super Elixir — just one example of the latest craze in beauty: nutricosmetics.

“I consume beauty drinks almost daily,” said Gogolak. “I started eight years ago when I was a junior in college because I had problematic skin. I discovered these drinks through a holistic nutritionist who was really ahead of her time. [The drinks] helped balance my skin’s pH levels and after a few weeks, my skin returned to normal!”

Macpherson’s Super Elixir — developed with her London-based Harley Street nutritionist Dr Simone Laubscher — is designed to maintain the body’s alkaline level and, according to the product’s website, “improve inner fitness, support healthy nutrition and optimise the functioning of all 11 systems of the human body.”

“Elle [Macpherson] came to me as a referral from another patient of mine,” Dr Laubscher told BoF. “Elle was not feeling great and wanted to improve her health. What she didn’t know was that she was overloading her system with chemicals and it wasn’t doing her any good. I gave her a bag of nutrients and she came back in two weeks’ time and she felt amazing. That’s what triggered the idea to launch The Super Elixir.”

Beauty drinks are a global phenomenon and this isn’t just a trend.

Nutricosmetics — digestible nutrients designed to enhance the appearance of hair, skin, nails and, sometimes, slim the body overall — are big business. A report published in February by Global Industry Analysts Inc., a market research company, estimates that the global market for nutricosmetics, valued at $3.36 billion in 2013 and it is “projected to reach $7.4 billion by 2020, driven by the ‘beauty from within’ trend and a resulting preference for oral nutritional supplements for appearance maintenance.”

Indeed, beauty and wellness are becoming increasingly intertwined. “I’ve been in the health and wellness industry for 20 years and, recently, beauty and wellness has become very sexy,” said Dr Nigma Talib, a London-based naturopathic doctor with celebrity clients such as Sienna Miller. “People are living longer and they want to look and feel healthy. It’s no longer about having a frozen botox face.”

“In the past, every print magazine would have you believe that health is about weight loss,” added Jason Wachob, founder and chief executive of mindbodygreen.com, a website dedicated to reinvigorating the way people eat, move and live around the world. “Today, it’s about feeling good as opposed to just looking good, which is incredibly powerful. What’s the point in looking good if you feel terrible and have trouble with your diet or problems with acne?” 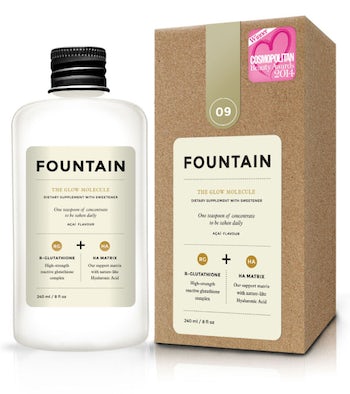 “Nutricosmetics provide beauty benefits from within. The benefits are above and beyond what you would obtain from just eating normal foods or applying surface products,” said Patricia Fisas, head of product development at Beauty & Go, a joint venture between Barcelona-born cosmetics brand Natura Bissé and bioactive drinks producer AMC Innova, which offers beauty beverages full of macro-antioxidants.

Net-a-Porter was among the first retailers to tap the opportunity in nutricosmetics, introducing ingestible products as part of their beauty category launch in March 2013. “The first supplement we launched was Youth Supplement by Beauty Works West, which was created by anti-aging specialist Dr Daniel Sister, and it’s still flying off the shelves today,” said David Olsen, senior vice president of beauty at Net-a-Porter.

According to Olsen, “Sales of beauty drinks [on the site] have increased by almost 300 percent since last year. In turn, we’ve broadened the number of brands we carry for this category and have increased our assortment.” Today, the luxury e-tailer stocks eight beauty brands that offer digestible beauty products, including Bodyism, Fountain, David Kirsch Wellness Co and The Super Elixir, which has already sold out four times on the site.

“Beauty drinks are a global phenomenon and this isn’t just a trend. It’s a profound movement and it’s a very positive one. There’s a shift from it being a sideline novelty beauty product to a genuine wellness product,” observed Andrea Bux, creator of Invisible Zinc and WelleCo, an organic supplement business she co-founded with Elle Macpherson.

So what exactly goes into these products? “All of our 45 ingredients come from whole foods such as spinach, broccoli, alfafa, goji berries and spirulina. It’s all manufactured in Australia. They’re checked for pesticides and insecticides and they’re all gently processed without heat-drying,” said Bux. She explained that in order to preserve all the nutrients, the powder has to be treated without heat. “Otherwise there would be no point and the nutrients would be dead. They have to be bio-live and absorbable for human body cells.”

For Wachob, the key is in the brand’s ingredients. “The fewer, the better. The more you understand, the better. A simple rule that I have is that if it wasn’t in your grandmother’s cupboard 50 years ago, it’s probably not good for you.”

Then why not simply ingest a traditional meal? “Our main customers are usually women with fast-paced lives and limited ‘me time.’ They are practical women seeking immediate functional and efficient results,” said Beauty & Go’s Fisas.

“We look at modern life and modern diet. People suffer from poor nutrition and stress; they often have a diet with lots of red meat from animals but not enough leafy greens; and there are lots of health conditions that are associated with your body being acidic. We’ve developed these products to help people who find it hard to live an alkaline life or those who find it hard to follow a strict diet regime,” said Bux. 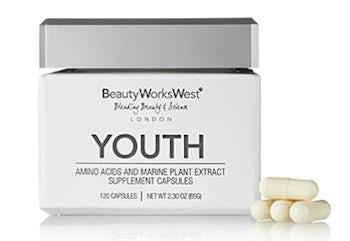 According to Dr Laubscher, many of The Super Elixir’s returning customers are working mothers. “In some cases, they’re not eating as well and they’re exercising less, because their careers are really taking off. Our main demographic is 30 years and over — they’re the ones who are really starting to take care of their health. Most of our customers are in the US, followed by Australia, then the UK and the rest of Europe.”

Dr Laubscher also noted an increase in male customers. “Men work hard and they’re stressed as well. It’s mostly businessmen coming in with their wives. [The market] has definitely changed over the past five years.”

Despite the growing popularity of nutricosmetics, many of the world’s leading skincare brands from Crème de la Mer to Dermologica and Neutrogena do not offer them. This is partly because available nutricosmetics products from new entrants to the market have not, on the whole, been well received by the majority of consumers. A 2014 report by Datamonitor Consumer, which surveyed 25,000 consumers across 25 countries, revealed that only 2 percent of those who drank beauty drinks daily claimed to see improvements in their physical appearance.

“Beauty ingestibles persist as a niche category [partly] due to the scepticism that shrouds it,” said Nicholas Micallef, beauty and personal care analyst at Euromonitor International. “In 2014, beauty-positioned supplements in North America only constituted less than 1 percent of total dietary supplements, compared to 8 percent globally, 13 percent in Asia-Pacific and 9 percent in Western Europe.”

Back in 2009, Nestlé launched Glowelle, one of the first mass-market nutricosmetics products, distributed at Bergdorf Goodman and Neiman Marcus stores. Two years later, however, it flopped. Nestlé announced on its Facebook page that the product would no longer be available for purchase. Although the company gave no reason for terminating the product, online reviews said Glowelle simply failed to deliver results.

“Manufacturers need to provide convincing evidence of their claims, such as the biological actions of nutricosmetics. It is not sufficient to tell consumers that the collagen in the product helps rejuvenate the skin,” said Micallef.

“A lot of brands out there make these claims — some work, some don’t. I think a lot of brands just use claims as a way of marketing,” added mindbodygreen’s Wachob. “Which ones are good? It really depends on the brand. It’s like juice. There are some juices that are really heavy on greens like spinach, kale and cucumber, which are hydrating and full of nutrients. Then there are some juices that are basically all sugars, which aren’t great for you in the long run.”

“You can’t just drink a beauty drink and expect the results to be prominent,” said Dr Talib. “I’m sure they work on some level, but there’s a lot more advertising to it than meets the eye.”

For Dr Laubscher, however, Elle Macpherson’s Super Elixir is “all based on good clean science. The product was born out of my work, from seeing thousands of patients over the years with issues from dietary to lifestyle-related conditions. Anyone can just find something in Holland and Barratt, but we really wanted to make an impact on improving people’s health, not make a quick buck.”