NEW YORK, United States — Patrick Starrr is well aware he’s not the first — or the 101st — influencer to launch his own cosmetics line.

“Another beauty brand? You damn right,” Starrr told his 4.6 million Instagram followers in a promo video earlier this week. He’s dressed in all red, from a custom rhinestone jumpsuit and pumps to a turban, his signature. The video’s production value has cinematic flair, with Starrr strutting across a stage in sparkly pumps illuminated by spotlights.

Starrr’s new line, One/Size, goes on sale Friday at Sephora and the brand’s own website. For now, it offers just two products: wipes and a mist. Makeup removal is an oddly unglamorous choice for someone as maximalist as Starrr; his peers tend to go for splashier products, like eyeshadow palettes and lipsticks. Rather than join the crowd, Starrr (real name Patrick Simondac) said he wants to position One/Size at the lucrative intersection of skin care and makeup.

And Starrr has no problem giving an item as mundane as a makeup-removal wipe his personal stamp.

“We call it big, thick and juicy. It’s about eight inches for the girls and gays,” Starrr said on a Zoom call. He’s referring to the wipes, which he uses to remove his “cake face.”

Wipes and mists are only the beginning. Starrr has a more-ambitious complexion rollout planned for next year, including a foundation range that will start with 32 shades and then expand to 40-plus shades. Few influencers have attempted to sell foundation, which is more capital intensive to develop than an eyeshadow palette. For that, he’s also backed by Luxury Brand Partners, the company behind Oribe and IGK. Tevya Finger, chief executive of LBP, said the firm will invest about $10 million in One/Size over three years.

Finger wants to turn One/Size into a megabrand, likening the brand’s potential to Fenty Beauty, which disrupted the makeup industry with its foundation for diverse skin tones and racked up hundreds of millions of dollars in sales in its first year.

“That’s one of the benefits of having an influencer,” he said. “You’re picking up an embedded group of sales.”

Of course, Finger isn’t the first investor to pitch his chosen influencer as the next Rihanna. And since Fenty Beauty’s launch, dozens of brands have adopted its inclusive messaging and ever-wider shade ranges. Starrr will also have to work hard to convince consumers outside his fan base that One/Size is more than (another) influencer brand. Colour cosmetics sales have been uneven in recent years, and the market hasn’t been helped by the pandemic. 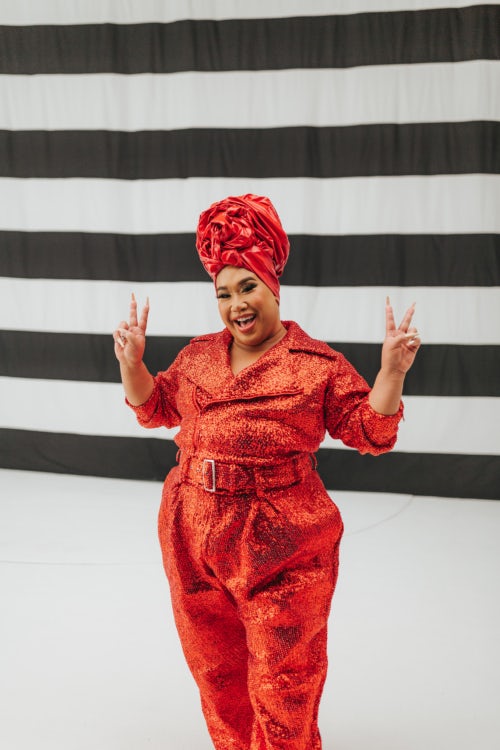 Starrr brings some unique assets, however. There’s that follower count, which includes another 4.4 million on YouTube and 2.1 million on Tiktok. He also has a persona that’s well-suited to the current moment: inclusivity has been central to Starrr’s personal brand since he started vlogging on YouTube in 2013, while still a makeup artist for MAC Cosmetics.

The influencer, who self describes as a “gay, plus size, bald, Asian man,” has broken down industry barriers of his own. And with One/Size, he said he will continue to “represent everyone that hasn’t been seen in beauty” through breadth of product, his team and positive representation of LGBTQ+ and people of colour in content. Having representation at the executive level, and not just the ads, also helps, he said.

“It’s funny how other brands will break down ‘barriers’ or standards of beauty through casting, but if you look at the uppity up, tippity top, it’s literally me,” Starrr said. “It’s really unconventional.”

Diederik Koenders, vice president of integrated communications at MAC Cosmetics, called Starrr a “trailblazer for inclusivity and diversity.” The influencer collaborated on five collections with the multi-billion dollar cosmetics giant between the holiday 2017 and fall 2019 seasons.

One/Size, originally set to launch in March, was delayed because of Covid-19. Trying to be “socially sensitive,” Starrr toned down content, eschewing extravagant makeup transformations for makeup-free photos and videos. Trying to sell products, whether from third-party brands or his own, took a backseat.

This week, Starrr is anything but toned down. Keeping with the red motif to match his brand’s signature colour and packaging, he wore a latex one-shoulder dress and matching latex turban for his video call with BoF on Tuesday.

Starrr said as he evolves from influencer to business owner and founder, he said he can better reach his consumer than any traditional beauty company.

“No one knows [the market] better than us [influencers], we receive data right away,” he said. “We don’t need to pay ... to find that.”

Angel Merino, a fellow influencer and longtime friend of Starrr’s, agreed. In 2014, Merino founded Artist Couture, his cosmetics line, which had its biggest sales day ever earlier this year thanks to a virtual “launch party” that included an appearance from Starrr.

Six years ago, it was less common for influencers to go into business for themselves. Now, influencers who have had success representing other brands in ad campaigns or lending their name to a capsule collection routinely try to make the leap to having lines of their own. That list includes many of Starrr’s pals – including Manny Gutierrez (Manny MUA), Nikita Nguyen (Nikita Dragun) and Merino.

“The influencers are working directly with manufacturers and the teams, rather than these big corporate companies where it is such a ladder and things have to get approved through so many people, and along the way things get diluted,” Merino said. “[We] create trends because we are influencers … There is more power in that.”

Starrr may be among the last in his cohort to launch a brand, but says there are advantages to being fashionably late.

“I will give the comparison of MAC [Cosmetics] and their liquid lipsticks. Everyone was like, ‘Why was MAC so late?’” Starrr said. “They were taking notes … It’s not that they were late, it’s that they were watching.”