Who Will Buy Drunk Elephant?

Drunk Elephant, one of beauty's hottest acquisition targets, is exploring a sale. Who has the desire — and the cash — to pay a potential $1 billion for the buzzy skincare brand?

Who Will Buy Drunk Elephant?

Drunk Elephant, one of beauty's hottest acquisition targets, is exploring a sale. Who has the desire — and the cash — to pay a potential $1 billion for the buzzy skincare brand?

It’s a steep price; 10-figure deals are usually reserved for brands in the far larger colour cosmetics market, like Too Faced (sold for $1.45 billion to The Estée Lauder Cos in 2017) or It Cosmetics ($1.2 billion to L’Oréal in 2016). Any buyer would be pricing in quite a bit of growth, given that Drunk Elephant’s sales were just under $150 million last year.

That’s not the whole story though. Skincare is one of the fastest-growing segments of the beauty market, and prestige brands with Drunk Elephant’s Instagram buzz (not to mention 50 percent year-on-year sales growth) don’t come along every day. The brand’s sales, though still small, are up sixfold since 2016, and have grown faster than any other skincare brand carried by Sephora. A new owner would have the resources to expand into new markets, building on Drunk Elephant’s entry into the UK in October.

So who are the potential buyers?

Of course, Drunk Elephant might now be too expensive for the beauty giant, which prefers to buy brands before they blow up. However, the company did splurge on Too Faced, and desperately needs a young-skewing prestige skincare brand, given that its crown jewel, La Mer, as well as Clinique and Origins, lack Drunk Elephant’s buzz on social media.

Unilever. A banker with experience on billion-dollar beauty deals suggested Unilever would be a good fit. Their reasoning: it’s one of the few conglomerates with $1 billion lying around, and unlike Estée Lauder and L’Oréal, has been willing to pay a premium to get out in front of new trends.

In 2016, the corporation bought Dollar Shave Club for $1 billion in cash and in 2017 paid a staggering $2.7 billion for cosmetics giant Carver Korea. Unilever is also trying to build its portfolio of prestige beauty brands, which saw the addition of Hourglass cosmetics in 2017 for $275 million. Drunk Elephant could be a nice addition to this group, which already includes Living Proof, Dermalogica and Ren.

Shiseido. The Japanese corporation is a bit of a wild card. Shiseido said in November it was establishing a global M&A unit. However, the focus recently has been on acquiring startups rooted in technology, such as MatchCo, which has customisable foundation capabilities that could then be applied to in-house brands like bareMinerals. Drunk Elephant lacks a tech angle, but you never know.

L’Oréal. Like arch-rival Estée Lauder, L’Oréal is also thought to have expressed interest in Drunk Elephant over the last couple years. That said, a deal seems unlikely, to say the least, given that the French beauty behemoth sued Drunk Elephant in November for patent infringement.

Coty. Coty badly needs some of Drunk Elephant’s buzz. But overcoming a sales slump amid executive turnover is probably the French corporation’s first order of business.

LVMH. Portfolio-wise, Drunk Elephant could be a good fit among existing brands like Benefit Cosmetics and Fresh (Drunk Elephant's chief executive Tim Warner and chief marketing officer Lucia Perdomo-Ruehlemann are alumni of Benefit and Fresh, respectively). However, last year, Louis Vuitton chief executive Michael Burke said the luxury conglomerate isn’t interested in acquiring brands for top dollar. “For M&A, I would tend to wait the next crisis. Everything collapses. That's when it becomes attractive.” Drunk Elephant is many things, but a bargain isn't one of them.

Editor's note: This article was revised on 30 January, 2019. A previous version of this article misstated that Drunk Elephant's asking price for a sale is $1 billion. This is incorrect. Industry experts predict the company could sell for that amount; the company itself has not floated this figure with potential buyers. 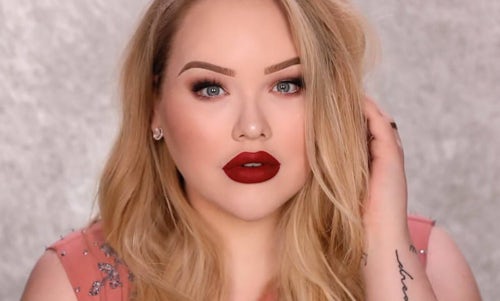 Marc Jacobs Beauty to take lessons from NikkieTutorials. In the latest beauty brand-YouTuber pairing, 24-year-old Nikkie de Jager has been appointed as Marc Jacobs Beauty's first global artistry advisor. The vlogger, best known by her online handle NikkieTutorials, where she has a sizable following (she counts 11.5 million YouTube subscribers and 11.6 million Instagram followers), will be involved in the brand's product development process and will also be responsible for expanding its content and artistry. First launched in 2013, Marc Jacobs Beauty is a collaboration between the American fashion designer and Kendo, LVMH's incubator of new beauty brands.

"The lipstick effect" drives beauty sales in China. In many Asian countries, skincare has long dominated the beauty conversation, eclipsing colour cosmetics in a big way, but lipstick has been driving big business for the sector, which in China grew 14.2 percent in the first half of 2018, bringing total retail sales of colour cosmetics to 127.6 billion yuan ($18.74 billion). According to financial experts, fears of an economic slowdown have triggered a return of the “lipstick effect.” The thinking is that when financial conditions get tough, people may cut back their spending on big-ticket items, but still want to treat themselves to life’s little luxuries, such as lipstick or cocktails.

Global male beauty market driven by South Korea. South Korean men have become the world's biggest male spenders on skincare, a market that grew by 44 per cent in the country between 2011 and 2017, according to a recent survey by GlobalData, a consultancy service. About three quarters of South Korean men undertake a beauty or grooming treatment — from salon hair treatments to at-home facials — at least once a week. This figure is even higher for Generation Z, with 58 percent of those born after 2000 saying they pamper themselves with "lengthy" treatments at least once per week, compared to 34 percent of South Korean men overall.

On-demand beauty service Blow expands offering. Since Blow Ltd began offering at-home makeovers in 2013, it's become possible to book everything from manicures to massages to blow drys the same way you'd order a takeaway. Now, the UK-based on-demand beauty app has added at-home hair cuts to its range of services, from £69 (about $91). In the wake of apps like Uber and Deliveroo, a score of on-demand beauty services — Glamsquad, Priv, Vênsette and Soothe, which are based in the US, and Prettly, Uspaah and Ruuby in the UK — have emerged to challenge existing salon models.

China’s shared makeup pods spark debate over hygiene. A recently opened makeup-sharing pod in Wuhan, China has sparked a heated debate over the potential ramifications of sharing makeup with strangers. The booths, which have been springing up all over China since launch in October last year, contain a dressing table, mirror and a selection of high-end beauty products. Users scan a QR code to pay a small fee to enter and can then trial the products inside. The concept is designed to make use of luxury cosmetics accessible. However, several users on the Chinese social media platform Weibo pointed out their concerns over sharing makeup with strangers.

Allergan refocuses Botox strategy on millennials. The pharmaceutical company, which makes wrinkle reducer Botox, injectable filler Juvederm and eyelash lengthener Latisse, has released an “Own Your Look” Botox campaign primarily centred on 20- and 30-something customers. They're responding to industry demand: according to the American Academy of Facial Plastic and Reconstructive Surgery, the average number of surgical procedures among 22- to 37-year-olds has doubled since 2013 to 47 percent and Botox injections, specifically, rose by 22 percent in the same time period. As these procedures become more mainstream, they've become more widely available via in-home services.