PARIS, France — Enter the Maison Christian Dior boutique at 52 Avenue des Champs-Elysées and it’s impossible to miss the large screen suspended behind the counter, beaming images of the Château de La Colle Noire, the late Christian Dior’s home in Grasse, where the couturier cultivated the Centifolia rose, the key ingredient in his Miss Dior fragrance, first released in 1947. On the wall near the screen, a quote in French from Mr Dior reads: “A drop of fragrance and you are dressed in Dior.”

But the store carries none of Dior’s best-known perfume products. There’s no J’Adore or Sauvage. Instead, the store sells rare fragrances, lotions and white goods that you won’t find at a Dior airport kiosk: a bottle of Bois d’Argent perfume goes for €395 for 450ml, candles are €75 and body cream is €90. There’s even a washbasin to test the €60 liquid hand soap.

Most top luxury brands sell their fashion goods directly to consumers. But in beauty, they typically leverage third-party department stores, beauty chains and airport kiosks to drive the majority of sales. Yet the rise of niche players like Le Labo, Jo Malone and Diptyque have proven there’s space for a retail-driven model in beauty, and major luxury brands have taken notice.

There's currently a network of around a hundred stores in France and internationally, based on the retail concept that started rolling out in 2017. To be sure, these stores represent a tiny fraction of Dior’s overall beauty business, but reflect a significant shift in mindset. 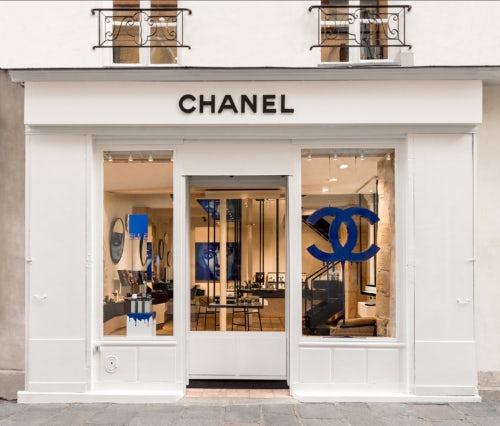 “We had, at the end of 2018, 108 freestanding Chanel beauty doors, which comes on top of thousands of points of sale that we have in wholesale. We’re going to continue to offer our clients touch points where he or she can find different types of experience," said Chanel Chief Financial Officer Philippe Blondiaux. “That’s part of our strategy to continue to develop this network of freestanding beauty stores in Paris and elsewhere.”

Going direct allows houses to own the customer relationship and capture valuable data. “The first objective is to get closer to their consumers, engage a conversation with them and get their data,” said Laurent Droin, managing director at Eurazeo Brands, an investment firm that owns a minority stake in Pat McGrath’s cosmetics brand, and a former advisor to Estée Lauder Companies on its Le Labo, Frederic Malle and Too Faced acquisitions. “Stores are very complementary to the digital channel. The combination of data makes an excellent base for the business, also allowing executives to get feedback right away on what works and what doesn’t.”

Then, there’s the brand experience and marketing value. “Beauty products with 60 to 75 percent gross margins give you real flexibility. You can temporarily invest at a loss for longer term returns, but they are also a source of indirect revenue, given the halo effect of these stores,” explained Cedric Besnard, head of European food and HPC research at Citi. “As the boundary between distribution and marketing is getting thinner, profitability of the stores isn't the only measure to take into consideration.”

Everyone is in a test phase now.

Dior and Chanel don’t employ the licensing model that’s popular with brands like Gucci, Yves Saint Laurent and Armani, which partner with the likes of Coty and L’Oréal to produce and distribute beauty products. Licensing has its advantages, of course. It allows brands to tap a fountain of cash without the cost and complexity of building an internal capability. And L’Oréal has experimented with single-brand pop-up experiences for Yves Saint Laurent Beauty and Giorgio Armani Beauty, among others.

But like Chanel and Dior, Hermès recently decided to develop its forthcoming skincare and cosmetics offering in-house. It also decided to distribute the products chiefly via its own stores “in a limited distribution so that we can learn,” said Hermès Chief Executive Axel Dumas. Similarly, Louis Vuitton sells its fragrance lines exclusively at 300 of its own stores.

For the time being, direct retail remains a small slice of the overall beauty pie and many brands have avoided cannibalising sales made via their wholesale partners by selling a different product mix in their own beauty stores. But over time, given the allure of capturing full margins on more products, the rise of direct beauty channels could change the balance of power between brands and retailers.

One thing’s for sure: the experimentation is bound to continue. Direct beauty stores tend to have smaller footprints, and thus lower rents, along with a highly profitable product mix, meaning brands can afford to test and learn. “Everyone is in test phase now,” said Droin.