NEW YORK, United States — For power-suited, puffy-sleeved consumers living in the in 1980s, a trip to the beauty floor of an upscale department store may have included a stop at the Prescriptives counter, where lab coat-wearing makeup artists custom-blended foundation in machines with futuristic tubes. The result was a personalised formula for each client. But the machines took up precious real estate on the shop floor and sales failed to add up. In 2009, exactly 30 years after its inception, beauty giant Estée Lauder, which owns Prescriptives, announced the company would stop wholesale distribution of the brand. “After a thorough analysis of the Prescriptives brand, management concluded that the brand's long term business model is no longer viable given the current market environment,” the company said in a statement.

But as with many cult products that manage to maintain a fervent if small following, Prescriptives fans were vocal enough to entice Estée Lauder Companies into rebooting the brand in 2011 as a direct-to-consumer proposition available only via e-commerce. In 2012, the brand brought back its famous custom foundation and, today, Prescriptives customers can upload images of themselves, answer a questionnaire on their skin type and even discuss their case with a “Beauty Genius” via video conference, then, in seven to 10 business days, receive a custom-blended bottle of foundation ($78) or powder ($58). Its new online approach has enabled Prescriptives to cut many of the costs associated with the original service. Has the Internet made the business of customised beauty more viable today than it was a decade ago?

A crop of new custom beauty start-ups seems to think so, inspired by the success of personalised products in adjacent categories, like footwear and apparel, from Nike iD to customisation platforms like Zazzle — which says it generated more than $250 million in sales in 2015. In November 2015, Zazzle veterans Andy Howell and Dave Gross drew on their experience to launch MatchCo, a company which sells $49 custom foundation developed by an in-house team of scientists using patented technology. (To date, the company has raised a total of $2.5 million in funding, including a contribution from Klaus and Jami Morse Heidegger, former co-presidents of Kiehl's.) Users of the service must download MatchCo’s iPhone app to scan and submit their skin tone. (The app has been downloaded over 50,000 times since launch.) With this data, MatchCo creates a custom formula, which ships within 48 hours from the company’s Santa Monica, California, facility. The model means MatchCo holds little inventory. 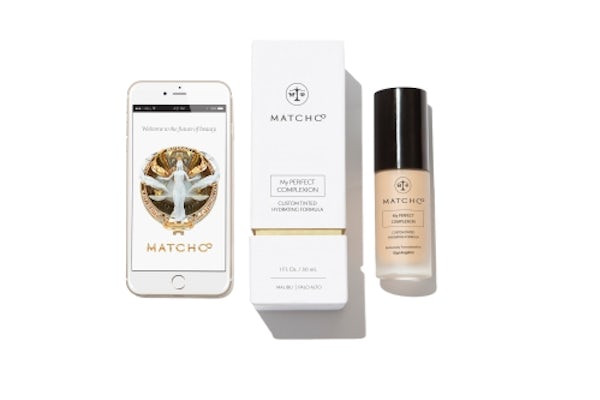 “With MatchCo we’re solving a real problem — and that’s powerful,” says Gross, pointing to a 2007 study of 5,200 women conducted by Estée Lauder, which revealed that 94 percent of women were wearing the wrong colour foundation. “The opportunity to use a mobile phone as a distribution channel was also important,” Gross adds. “By doing what we’ve done with the mobile phone we feel like we’ve cracked one of the problems of customisation, which is scale and demand.”

And MatchCo is by no means the only company attempting to succeed where Prescriptives once failed. Launched in October 2015, Melange has a similar proposition: $40 foundation, custom-blended after a customer uses the company’s iPhone app to scan and submit data on their skin. Melange, however, takes the process one step further, sending customers five free samples to try and ensure a perfect match. The company says it has “several thousand active users” and the app has found a strong audience with non-caucasian consumers, who are too often ignored by traditional beauty counters. “Over 60 percent of our users are black or brown women,” reveals chief executive Ariel Zborowski, a former merchandiser at Sephora, who co-founded the company with ex-Googler and chief technology officer David Nachum. “We have found that many, many women are already talking about this and reaching out to their online communities just to vent about how discriminatory the market is.”

While finding the right colour of foundation may be easier than ever before, MatchCo and Melange have yet to develop custom formulas for different skin types (currently, each offers one formula in many shades). However, both companies are actively collecting and analysing incoming data on skin tone and condition in order to inform future product development. Indeed, complexion-focused products are only the beginning for customisation in the beauty industry. Mixologie sells a $99 kit of eight rollerball fragrances, which are meant to be layered to create custom scents, complete with suggested recipe cards. In June 2015, QVC founder Joseph Segel launched ProfilePro, a customised shampoo and conditioning system that offers unique formulas for different hair types.

But can customisation really be the engine of a successful beauty business? Or does it work best as a marketing layer over a more traditional model? Bite Beauty founder Susanne Langmuir has had enough success with the lipstick label’s Beauty Lab — which opened in New York City in 2013 and offers shoppers the opportunity to create their own lipstick shade — to expand the approach to Toronto. But the Lab drives only a fraction of overall sales. (Acquired by the LVMH beauty incubator Kendo in 2014, Bite is sold at just under 1,000 Sephora locations.) “The ability to create a profitable business model that starts from scratch with every single client is incredibly daunting,” says Langmuir, whose first foray into customisation was with Susanne Lang fragrances, sold at Barneys New York in the early 2000s. “To me, it’s not surprising that there is a lot of excitement around customisation, but it’s not sustainable.”

Langmuir uses her Beauty Lab to service a niche, while driving the majority of traffic to the nearby Sephora. But the lab also acts as a powerful channel for customer feedback. “The customisation is a bridge between us and our clients,” she explains. For instance, mauve colours with grey undertones were trending at the Beauty Lab, which compelled the company to develop a collection of colours in that family to be released during the summer of 2016. “We can see trends emerging. It doesn’t represent a business model that matches what we do at retail for ready-to-wear [products], but it’s essential.”

“When was the last time you finished a tube of lipstick?” asks Langmuir. “With foundation, sure, if you find the right colour or formula then there is a lot of loyalty.” But even so, how desperate are consumers to have just the right shade of makeup? Mass market products like L’Oreal Paris’ True Match — which claims its formula, once applied to the skin, adjusts to perfectly match the wearer’s pigment — are already tackling this problem at a more accessible price point (a bottle of True Match costs $10.95). Meanwhile, Sephora’s “Color IQ” system, developed in partnership with Pantone, uses in-store scanners to measure skin tone and recommend relevant products. Are these initiatives enough?

“I’m not sure people are willing to pay a huge premium for individually customised products,” says Eleanor Dwyer, a beauty-industry analyst at Euromonitor International. But for start-ups bullish on customised beauty, the rise of millennial consumers — who spent more than $460 million on beauty products in 2014, according to Nielsen — may signal good news. “The people who would be interested in this would be the millennial generation, the group that’s really pushing the individuality in beauty.”