Today, the CFDA announced that it was adding Fashion Instagrammer of the Year to its list of awards. But is the platform’s strict no-nudity policy, which resulted in Grace Coddington’s account being temporarily suspended, out of sync with fashion’s liberal attitudes?

It’s an affair that took many by surprise. Fashion, an industry once known for its social media naysayers, fell quite madly in love with Instagram. Like all of the best love affairs, fashion’s attraction to the photo-sharing service was instant and intoxicating.

And as members of the fashion flock took to the platform, made-for-Instagram moments sprung up across international fashion weeks — couture powerhouses like Dior mounted elaborate video installations; Kenzo created a carpet made entirely of fresh fruit. As the affair continued, new campaigns, backstage shots, magazine covers, runway stills and images of sleek office spaces quickly found a place on the platform, alongside grander commissions.

For the fashion industry, the visually-driven Instagram was a natural bedfellow. And underscoring the degree to which the platform has become a critical component of fashion communication, the Council of Fashion Designers of America, today, launched its inaugural Fashion Instagrammer of the Year award. "Within at least the past six months, we've experienced the ever-growing influence of Instagram within fashion first hand," Steven Kolb, chief executive officer of the CFDA, told WWD. "Instagram has been a focal point for the industry as a whole and has quickly established itself as the go-to platform for fashion storytelling."

Even the industry’s die-hard digital holdouts began seeing the world through Instagram’s beautiful little squares. After years of skepticism, American Vogue’s auburn-haired creative director, Grace Coddington, finally joined Instagram last Friday. Fittingly enough, her inaugural post was a trademark line-drawn figure — a sketch of herself — reclining in a deck chair, nude, in support of her “No Clothes Auction” on Paddle 8, an online marketplace for collectors. But the very next day, her Instagram account was abruptly deactivated for violating the platform’s strict no-nudity policy.

By Monday, Coddington’s account had been turned back on. A representative of Instagram explained to New York magazine’s The Cut: "When our team processes reports from other members of the Instagram community, we occasionally make a mistake. In this case, we wrongly removed content and worked to rectify the error as soon as we were notified. We apologise for any inconvenience.”

But this isn’t the first time fashion has fallen afoul of Instagram’s strict no-nudity policy. While Coddington’s transgression may have been relatively mild, Frida Giannini’s muse and Gucci catwalk regular Anja Rubik’s violation was of a starker kind. The model and editor of online magazine 25 reposted an image of herself (which originally appeared on Style.com’s coveted homepage) shot mid-stride, closing Anthony Vaccarello’s Autumn/Winter 2014 show, in which Rubik was wearing an overcoat and gauzily sheer top, revealing at least one nipple and perhaps two. The account was shut down within 24 hours. “I think this whole thing is ridiculous,” Rubik told Style.com at the time. “It’s like saying to the world that a woman’s body is offensive. You can’t show a nipple behind a sheer shirt?” The decision sparked a joking backlash campaign under the banner “Don’t fear the nipple, Instagram,” a rallying cry which played off Style.com’s original tag line: “Don’t fear the nipple.” 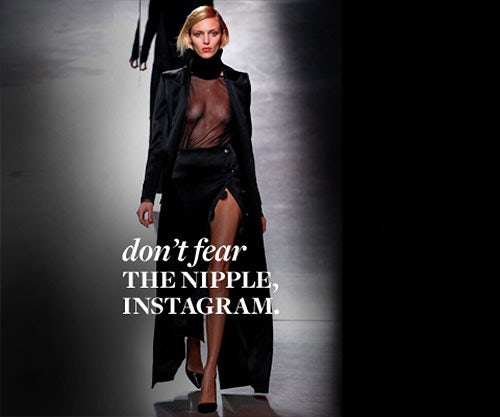 Rubik isn’t the only catwalker model to have had her Instagrams censored. Kendall Jenner, who walked for Marc Jacobs this season, wearing a sheer top, had the image of her most high profile booking removed from her Instagram account.

So far, so snigger-worthy. But are there more serious consequences to the tension between Instagram’s no-nudity policy and fashion’s entrenched acceptance of nudity?

Instagram’s first advertisement, back in November 2013, was run by a multi-billion-dollar fashion juggernaut: Michael Kors. And, indeed, fashion companies, thanks to their visually-driven and aspirational messaging, are amongst the top performers on the platform. But many of fashion’s biggest brands are anything but clean cut.

In fact, some of fashion’s most memorable advertising campaigns are undeniably explicit in their nature; Tom Ford, Carine Roitfeld and Mario Testino’s infamous “Pubic Enemy No. 1” campaign of 2003 went so far as to depict a “G” for Gucci into the pubic hair of model Carmen Cass. Shocking? Intentionally so, but it remains the campaign that best typifies the excess of the period, both artistically and sociologically. And visceral imagery is just as popular today. Sølve Sundsbø’s recent Calvin Klein campaign may not strictly contravene Instagram’s no-nudity policy, but it remains composed of tightly cropped crotch shots.

Of course, Instagram’s stance is not completely without merit. While fashion titles have long published images unsuitable for children’s eyes, they did so because they were squarely aimed at adult readers. That delineation is far harder to achieve online (to create an Instagram account, a user need only agree to a disclaimer stating that he or she is over the age of 13). And it must be said that, even when catering to adult audiences, fashion has been guilty of crossing the lines of good taste. Accusations of child pornography are, sadly, not unknown, thanks to the fact that some in the fashion industry see fit to portray underage girls in explicit and suggestive scenarios.

As fashion and Instagram progress their love affair to the next level, hopefully a better compromise can be struck. After all, it’s when passion has subsided that true compatibility is best measured. And, as always, the devil is in the details.