LONDON, United Kingdom — With its invigorating suggestions of early punk, Russian Constructivism and a future filled with perpetual art students, the bleach-mottled, patched and collaged Raf Simons Sterling Ruby collection was a highlight of the Paris men’s shows earlier this year. The artist and fashion designer have a close relationship of some years, but their much reported creative coming together was not the only collaboration on display in that collection. Those patched coats, some of which used more than 75 different fabrics, were also a discreet and, at the time, unpublicised celebration of Simons’ work with the Danish textile company Kvadrat, with which the designer is set to reveal a first collection in London this evening.

“I am active as a fashion designer, but in my head, the way I see things, the way I think about things and the way I create things is not isolated within the thinking process of a fashion designer,” Simons told BoF. The designer, who graduated in industrial design before launching his eponymous menswear label in 1995, admits that he has always felt pulled in multiple directions creatively and that it took him many years to feel comfortable with the label of fashion designer. “As much as I make clothes, I’m always thinking about other things besides clothes that still represent the idea of creation, whether they’re furniture, fabric or interiors. At the same time I have my feet very deeply into the art world — there’s no day I’m not looking at art, there’s no day that I’m not reading about art.”

Simons thrives on collaboration and the fashion world is now well accustomed to hearing the word “interzone” in the context of the designer’s discussions with and about his interdisciplinary exercises. Nodding to the works of cult author William Burroughs and the British band Joy Division, the term suggests the marginal, subversive and deracinated; areas of cultural fascination that Simons certainly shares with Sterling Ruby. The collaboration with Kvadrat however, occupies a hitherto unseen Simons “interzone” and one rather less associated with teenage kicks: the influence of his passion for interior design. 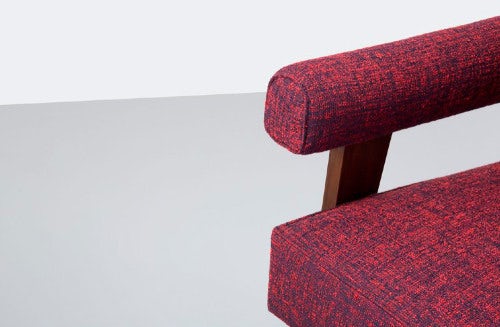 Kvadrat do not make fashion textiles. Founded in Denmark in 1968, they’re a leading manufacturer of furnishing fabrics. Their textiles dress landmark architectural projects from the Walt Disney Concert Hall in Los Angeles to the Guggenheim Museum in Bilbao and the Guangzhou Opera House in China. But thanks to Raf Simons’ search for thick, old-fashioned woollen cloth for coats for his Autumn/Winter 2011-2012 collection at Jil Sander, three years ago Kvadrat also inadvertently ended up dressing some of the world’s most stylish women. After discovering that their furnishing textiles had made a surprise appearance on the Milan runway, Kvadrat contacted Simons and, eventually, invited the designer to create a collection for them.

While furnishing fabrics may have durability on their side, Simons felt that the leading manufacturers were either overly conservative in their use of colour or aggressively modern. And part of his intention in creating the Kvadrat/Raf Simons collection was to bring the aesthetic sensibility of the fabrics he used in his fashion collections into the interiors space: the collection features sturdy re-workings of bouclés and tweeds, and splashes of very particular, intensely pigmented hot colours of the kind that he brought into his latter Jil Sander collections.

Although he’d been working on the designs for a number of years, Simons had not planned to use the fabrics in his collection with Sterling Ruby. “The idea of using them on the pieces in the collection actually relates strongly to Sterling’s BC [Bleach Collage] works,” he explained. “We just loved the way the fabrics came out — the colouration and the juxtaposition of colour. In the coats in the collection that have the abstract collage work, it’s all about the relationship between colours; it almost feels like a do it yourself, punk attitude; sometimes there are 75 pieces of fabric on one piece and these are fully done with Kvadrat fabrics. In the end, you cannot say ‘This is a black coat or this is a green coat.’ It is what it is; this is about how colours can be juxtaposed and create a new impact.”

As a small, independent fashion label, using textiles from outside of the fashion industry gave Simons and Ruby enormous flexibility, not only in the choice of available colour, but in the quantities that they were able to use. While big fashion house often develop special fabrics or buy up exclusive use of fabric designs from manufacturers by guaranteeing an order of many thousands of metres, even small houses will have to agree to substantial minimum orders when purchasing fabric. It’s a situation that contains an inherent contradiction: to create a luxurious ready-to-wear piece, you must commit to producing in quantity. In contrast, Simons compares the experience of working with Kvadrat as being “almost couture-like.”

“It was technically an ideal situation,” said Simons. “In the fashion business, when you use a fabric, you can order two or five metres when you’re [working on the] collection, but once you go into production you usually have to order a minimum of 60 metres, sometimes even more. At Kvadrat you can order three metres of their fabrics, so in that sense it was a unique opportunity for us to make garments where in one piece we used 75 different qualities in 75 different colours. Can you imagine if I only had access to the fashion business and fashion fabric? I would have to order 60 or 120 metres in every quality and every colour for that one coat —I would go bankrupt!”

Discussing upholstery fabrics shows a side of Simons seemingly at odds with the big-booted, arty rebellion apparent on the runway in January. Words like “domestic” and “cosy” pepper his conversation, and he speaks feelingly of how he could never be comfortable hanging out on a sofa covered in “glam” synthetic fabric.

Looking back at his decision, in the early 1990s, to move into fashion, Simons, a former furniture designer, admits that, at the time, he was impatient with the slow pace of the design industry. “I wanted to be active in an environment that was way more social, more dynamic and with more speed. I was young.”

Twenty years on, the designer has come to relish the slow pace of developing a textile collection. Perhaps it’s because he’s grown up, but perhaps that homey, hand-worked side has always been there. After all, if you look behind the bleach-splattered denim, the Sterling Ruby collection is, as much as anything, a celebration of young men stitching, patching and quilting.