Jonathan Anderson talks exclusively to Tim Blanks about the thinking behind his new retail ‘Workshops,’ set to launch today next door to London’s Ace Hotel.

Jonathan Anderson talks exclusively to Tim Blanks about the thinking behind his new retail ‘Workshops,’ set to launch today next door to London’s Ace Hotel.

LONDON, United Kingdom — It’s a given that fledgling fashion businesses dream of the moment when they have the wherewithal to open their own store, where they are able to present their vision unpolluted by pesky intermediaries like department store buyers. Jonathan Anderson’s reputation as a contrarian remains untainted by the fact that, offered such an opportunity, he turned it down. He’s perfectly happy with the representation he gets in stores such as Selfridges and Barneys. “I don’t believe a brand our age should be opening a flagship store,” Anderson declares. “It feels forced. We’re too young, we shouldn’t be operating outside of our means.”

So there’ll be no JW Anderson store in the space adjacent to the Ace Hotel in London’s East End that was offered to him a year ago. Nor will there be anything as banal as a pop-up. What there will be is an ongoing collaboration between Anderson and a group of creators he considers kindred spirits. Every month, there’ll be someone new. And sometimes there’ll even be stuff for sale.

Today we live, not in a luxury world, but a cultural world, where we have to create more experience.

He’s calling it Jonathan Anderson Workshops, echoing the Bloomsbury Group’s Omega Workshops, his inspiration for the project. But Japanese fashion legend Issey Miyake was equally influential. “I’ve always been obsessed by him and how he worked with so many different types of people. I think that defines where we live today — not in a luxury world, but a cultural world — where we have to create more experience. The luxury environment just isn’t personalised anymore.” 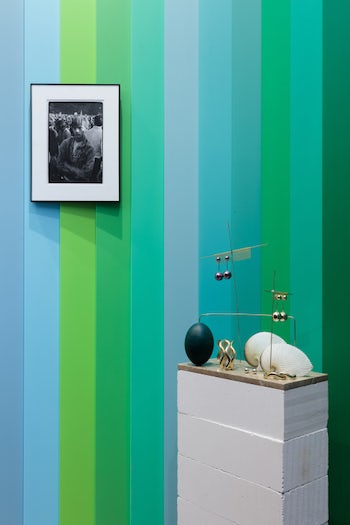 Personalisation is the key to what Anderson intends for his workshops. “I feel like a store should be like your house,” he says. “When you bring something into your room, you have to change it. I do that all the time at home.” He did it when he was a kid too, taking over his parents’ bedroom, merchandising his clothes in their big and ugly pine closet. Window-dressing is a craft he later honed while assisting the late Manuela Pavesi at Prada. “Ultimately I love designing clothing, but I love arranging it too, curating it into something,” he clarifies. “When you do a rack, it is incredibly difficult to make it appealing, but when you would watch Manuela and Mrs Prada do it, rejecting everything one week, coming up with a new code of garments the next, it was incredible.”

His new collaborators run a gamut, from artists to ceramists to singers to Spanish magazine publisher Luis Venegas, who is first up to bat on 28 January. “He gave me total creative freedom to work on a project, so I decided to try something new, not just my usual work as an editor,” says Venegas. “I’ve been dreaming for a while about photographing some friends and doing my first personal book of photographs. It’s a bold step for me, but it felt like the right time. So I requested my favourite pieces from Jonathan’s archives and shot them in Madrid before Christmas. And that’s what my book The Rain In Spain Stays Mainly In The Plain is about — no more, no less.”

Venegas will also be the first collaborator to deal with the Workshops’ very specific visual configuration: 250 square feet, closed in by the most intensely coloured walls, with a giant wardrobe centre stage. Whatever the collaborators decide to do, they’ll be competing with colour and a closet. But Anderson sets that challenge in the spirit of Dover Street Market. “My most exciting moment, when I moved to London, was going to the opening night,” he remembers. “Hedi Slimane showing furniture? I feel like it opened up a very different thought process. Everything was commercial-able, but it had to be curated perfectly. And that’s how you get a gallery and booze and cheese and bookreadings and talks about stamp collecting all in the same place.” 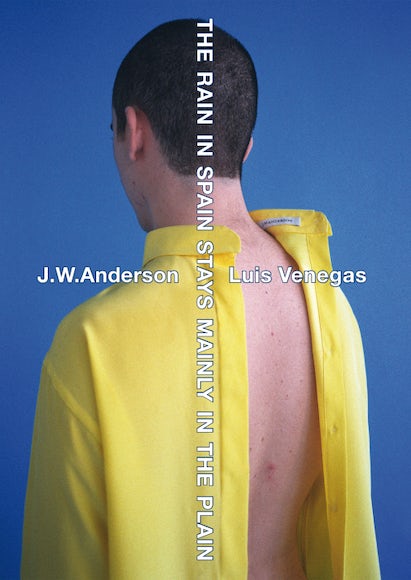 The Rain in Spain Stays Mainly in the Plain by Luis Venegas | Source: Courtesy

With that appetising array of possibilities on tap, it pays to remember that Anderson is ardent about craft. That’s why he is so obsessed with the original Omega Workshops, why he showed a resort collection in Kettle’s Yard in Cambridge, why the second presentation in his new space adjacent to the Ace will be from Ian David Baker, who photographed gay culture in the 1980s. “I’m doing a book with him,” says Anderson. “And we’ll be showing different kinds of craft: fishermen’s sweaters, antique blankets from the 18th century with his images cut into them.”

Tracking back to his comment on “the luxury environment” for a moment, Anderson’s experience as creative director of Spanish fashion house Loewe — owned by luxury conglomerate LVMH, which holds a minority stake in the JW Anderson brand — has also informed his plans. He was intrigued to see how the best-performing Loewe stores are those that have the most interesting environments; Miami, for instance, which features the stone skeleton of an 18th century Spanish granary moved into a white box, where Anderson has mounted shows by artists like Lucie Rie and Paul Nash. The ambition is obvious. In much the same way that he has worked with Steven Meisel to remodel Loewe’s style, Anderson is recontextualising the brand’s substance. “Even if no one knows how to pronounce the name, I’m determined to make Loewe work,” says Anderson. “I feel like the content will prevail.”

It’s actual physical content that is king to Anderson: “Because of Instagram, I think we forget we need it.” He’s a born collector of physical objects, with a gratifying attachment to printed matter. In fact, the store Printed Matter in New York is another feeder of his Workshops. “I love that place. You see everyone there. There is so much reference material, so much new peculiarness. And there’s no edit, so you can find some of the most dirty, outrageous things.” Anderson wants to publish things for his own space. Asked about the influence he wields on fashion’s new generation, he demurs. “I think I’m just an editor, I’m not from that generation, like Nicolas [Ghesquière] or Raf [Simons].” 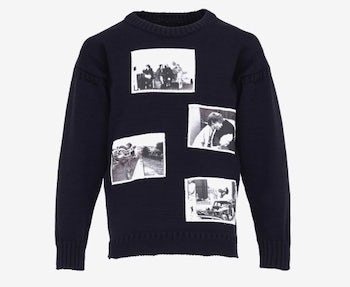 But that “editor” was recently anointed designer of the year for both womenswear and menswear at the British Fashion Awards. “I was embarrassed because it must have looked maxi-greedy,” says Anderson. “But it also made sense, because one season is one thing — men and women, the same vocabulary. I don’t see the difference. I don’t know how you can classify a garment as a gender.”

“An agitator,” he calls himself. “I don’t know where we fit in.” Again, he insists he’s not a designer. “I see myself as reacting to a situation, taking from the world that’s around.” Ultimately, there’s something refreshingly pragmatic about Anderson’s attitude. Heed it, all you doubters who wonder at the provocations he parades in the name of fashion. “Fashion already exists,” he counters. “You can’t add extra wheels to a car.”

So what does Anderson imagine he’s doing? “Jonathan’s combination of experimentation and mystery and surprise seems to be irresistible,” Luis Venegas observes. “His work feels like the constant promise, ‘The best is yet to come.’” As for himself, Anderson claims, “The dream would be to be an artist. But it will never be that for me. I don’t believe in that transcendence. I don’t believe a designer can go somewhere else.” And that’s odd, because “somewhere else” is exactly where he is going as he realises his latest dream.

Editor's Note: This article was amended on January 20, 2016. A previous version of this article misspelled the name of the artist, photographer and illustrator Ian David Baker.