In an exclusive interview, Emma Hill and Georgia Fendley, the dream team behind the transformation of Mulberry, sit down with BoF to reveal the strategy behind their highly anticipated new brand, Hill & Friends.

In an exclusive interview, Emma Hill and Georgia Fendley, the dream team behind the transformation of Mulberry, sit down with BoF to reveal the strategy behind their highly anticipated new brand, Hill & Friends.

LONDON, United Kingdom — “It is a start-up, but we’re not expected to be a start-up,” says Emma Hill, the designer credited with creating hit bags for Mulberry, before leaving the company in 2013 in what she describes as “a very public divorce.” She is sitting in the offices of Construct, a branding agency owned by her business partner, Georgia Fendley, former head of brand at Mulberry. A stone’s throw away from Vogue House in London’s Mayfair, the space is doubling up as the headquarters of Hill & Friends, a highly anticipated new accessories brand set to launch this September, during London Fashion Week.

“So many people have been so supportive. It’s kind of like, ‘We know you’re good for it’ — which is amazing, but now we have to deliver!” she continues. “We have investors and we have planned our funding for the next three years, so we are looking at what you would describe as pretty aggressive growth for a new business. But [having] a team as established as we are, and the fact that we sold a significant quantity to Net-a-Porter off-sketch, it is a very unusual situation,” adds Fendley.

Indeed, unlike the founders of most young accessories brands, Hill has abundant industry contacts and a track record of designing commercially successful accessories, such as Mulberry’s “Alexa” bag. Prior to her tenure at Mulberry, Hill held positions on the design teams of Burberry, Calvin Klein and Marc Jacobs, and consulted on projects for Chloé and Halston. “There is a theme with the work that I do,” she says. “I am fascinated with proportion — little bags with big hardware and vice versa. I like things that are a little bit chubby.”

“I am a pretty commercial designer. We have gone through this period in time where that has become a dirty word, which I always remain confused about. I always do practical bags,” she says. “Nothing infuriates me more than seeing a bag that doesn’t work. When I see the first raw version of the bag, if my nose twitches — and it doesn’t happen that often — with the big ones like the Alexa, you know it.”

Hill & Friends’ first collection comprises six styles and 45 to 50 SKUs. “I added some last minute ‘Bobby Dazzlers,’” says the designer. “There are quite classic shapes — I am an innate merchandiser, I always say, so there is a range of function and a range of use. The colour palette really lays the foundation [of the brand], so there are classics, and a bit of ‘jazz hands!’”

“Some warmth and wit,” offers Fendley, when asked what will differentiate the new label from its competitors. “We have created signature details for the brand, which have a playful character and give the product an appeal that is identifiably Hill & Friends. We wanted to create product that really works: practical, carefully-considered, functional bags, which are desirable, luxurious and refined — with a subversive wink!” 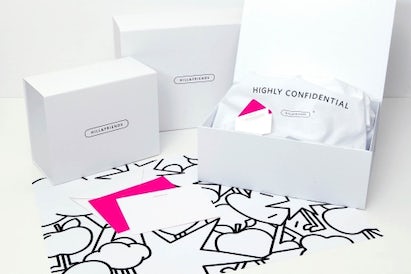 The price architecture for Hill & Friends ranges between 495 pounds (about $770) and 1,795 pounds (about $2,800), with most of the bags priced between 650 pounds (about $1,010) and 900 pounds (about $1,400). “It was never a point of negotiation between us — we knew where we wanted to sit in the market. At that level you can deliver really exceptional quality, but reach a comparatively broad set of consumers,” says Fendley.

“The market is unbalanced, [with] lots of choice at the top and the bottom but a big gap between those segments. We think consumers are missing genuine luxury and quality at an accessible price point. The higher prices charged for some products don’t reflect a commensurate improvement in quality,” she continues. “This has created an opportunity, which I’m sure lots of brands are thinking carefully about at the moment.”

We think consumers are missing genuine luxury and quality at an accessible price point. The higher prices charged for some products don’t reflect a commensurate improvement in quality

Fendley and Hill met in 2008, when they both joined Mulberry; Fendley as brand director and Hill as creative director. In 2012, when Fendley left (a year later, she was followed by Hill), Mulberry’s turnover had risen from 50 million pounds to 170 million pounds (about $70.4 million to $274.6 million at the time). Profit had grown from 4 million pounds in 2008 to 36 million pounds in 2012. Over the same period, the share price surged 1,600 percent to 26 pounds per share.

“Our management team at Mulberry was very small. There [were] only six of us and we were the only two new positions, so when you’ve got only six people leading a business through that kind of growth, it is inevitable that you gain an understanding of logistics, the digital platforms that you are using — all the way through the cycle,” says Fendley.

However, Mulberry’s momentum was not to last.

When Hill’s departure was announced in June 2013, Mulberry’s share value immediately fell by eight percent. The news was documented in almost every major national newspaper, such was the public interest in the prominent British brand’s demise. Reportedly, Hill left because she disagreed with the strategy of Bruno Guillon, Mulberry’s new chief executive and an ex-Hermès executive, who aimed to upscale the brand's positioning and pricing. When Guillon left the company in 2014, Mulberry had lost two thirds of its market value in just two years.

When the non-compete clause in Hill’s contract with Mulberry ended last year, for Hill and Fendley, it was “now or never.” The pair began quietly creating Hill & Friends and officially announced the brand’s existence in June. The business has received minority investment from undisclosed parties and Hill and Fendley are equal majority shareholders. “Given some of the issues in our past, it was obviously very important for us to maintain control,” says Hill. 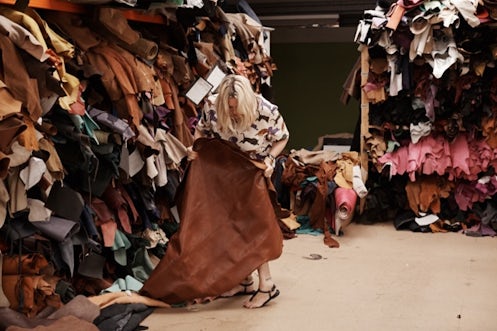 Hill & Friends accessories will be produced in Somerset, a small county in England’s West Country known for its leather-manufacturing heritage. Hill and Fendley got to know the area while at Mulberry, which also produces there, and claim the quality of the region’s artisanal manufacturing rivals that of Italy.

Producing so close to home also allows Hill to spend a significant amount of time at the factory, keeping a close eye on the first incarnations of the new brand. “The development process is such a long one. It is about an eight-month cycle to have your own leathers and your own hardware, so you have to be passionate about it all the way along. It may sound a bit twee, but if you keep that passion, it gets to the customer at the end,” says Hill.

Hill and Fendley have also combined their experience to design an “incredibly complicated” manufacturing calendar. This involves a small-scale production run that will mean customers are able to shop a limited quantity of the products on the day of Hill & Friends’ LFW presentation, before the collection goes into production for retail. For the “see now, buy now” period, Hill & Friends will be stocked exclusively on Net-a-Porter. “It felt like a natural first step, given that we wanted to focus on digital penetration. Their six million regular shoppers, their global penetration, all of the logical and emotional reasons made it seem like a no-brainer,” says Fendley.

HillandFriends.com will launch on the same day. “We view our site as our flagship — that is very different to 2008,” says Fendley. Indeed, in the three years since the duo’s days at Mulberry, major shifts have occurred in the fast-moving landscape of fashion retail. “I think we have all been very lazy about digital and I think that is because we have had to work so hard to keep up with changes in technology and consumer habits, that experience always came last."

According to Fendley, online customers can expect “all sorts of lovely experiences” on the Hill & Friends website that create the “element of magic” people traditionally associate with physical stores. “There are surprises that are additional experiences, gifts from the brand to the consumer that are not transactional, in terms of content. We have really thought long and hard about the experience,” she says.

Thus far, Hill and Fendley have met with six strategic, “brand-building” retail partners — which they declined to disclose. Two retail stores in New York and London have been factored into the label’s three-year business plan, and the label’s communications strategy will focus on these cities. “It is tempting but very dangerous to try and speak to everybody in the world all at once,” explains Fendley.

“We built a model that we were comfortable with — we didn’t want to be too aggressive, but we wanted to be financially strong enough that we could make any of the decisions that we wanted to make. We are not putting ourselves under the kind of pressure that we have seen some other new businesses put themselves under,” says Fendley.

But no matter how talented they are, the duo acknowledge that building a brand from the ground up is not without its challenges. “I remember when I was at Calvin [Klein], it was a great honour to work with him on a collection, but in that building, everything you ate, everything you saw and touched, was his vision of how he wanted the business to be. I learnt a lot from that. You have to join up the dots, it is not just about having an amazing product,” says Hill.

“Its both joyful and terrifying. But its made me remember why I love what I do,” she says, laughing, as her partner smiles and nods.

Editor’s Note: This article was revised on 4 August, 2015. An earlier version of this article misstated that Construct was a digital agency. That is incorrect. It is in fact a branding agency.