Designer Thakoon Panichgul, president Lucy Yi and investor Vivian Chou lay out the ‘designer fashion now’ strategy for the next iteration of Thakoon.

Designer Thakoon Panichgul, president Lucy Yi and investor Vivian Chou lay out the ‘designer fashion now’ strategy for the next iteration of Thakoon.

NEW YORK, United States — Before he studied fashion design, Thakoon Panichgul studied business. While his clothing concepts are often driven by gut instinct and emotion, Panichgul thinks analytically and has long recognised the imperfect alignment between what fashion retailers sell and what consumers actually want to buy — and when they want to buy it.

This autumn, Panichgul aims to address this point of tension and reboot his brand in the process. “I had been feeling a bit of a frustration in the past couple of years. I was in control of what vision I was putting out onto the runway, but after that it was almost fair game for anybody else,” Panichgul told BoF on a midsummer day in his New York City offices. “There were all these differences in perception of the brand and ultimately, for me, it was getting very confusing. It was me looking at the landscape and saying, ‘What does Thakoon stand for? It doesn’t stand for much.’”

In the coming weeks, fashion will see the second coming of Thakoon, this time backed by Bright Fame Fashion, the Hong Kong-based investment vehicle led by Vivian Chou, daughter of billionaire textile mogul Silas Chou, which acquired a majority stake in Thakoon in 2015. Adopting a direct-to-consumer, “designer fashion now” model, the collection will be sold exclusively on Thakoon.com, starting in early August, and in the company’s first physical retail store, set to open in New York by early September. It is, of course, a departure from the typical designer business model that relies largely on multi-brand boutiques and department stores for distribution.

Many brands are moving toward a direct-retail-only approach, but in Bright Fame Fashion, Thakoon has backers with ambitions — and a track record — without parallel. Family patriarch Silas Chou, chairman of Novel Fashion Holdings Ltd, is best known for his investments in Tommy Hilfiger and Michael Kors. While the Hilfiger brand exploited the link between fashion and music, and Kors brought fashion to television, the new Thakoon aims to woo the digital consumer in a way few, if any, fashion houses have yet managed.

The value that we’re selling is really hinged on newness and scarcity.

The Chous spent two years searching for the right match for this venture, interviewing 15 to 20 designers along the way, they said. They were introduced to Panichgul by investment banking firm Ohana & Co, which organised a meeting in Milan. “It was clear that they were looking to solve the same frustration in the market,” Panichgul said. “And to bring the designer sensibility closer to the consumer.”

“We definitely wanted to find an American designer,” Vivian Chou explained on the phone from Hong Kong. “American brands not only do well in the US, but they have a huge global presence.” Bright Fame also wanted to partner with someone who could fully commit to the idea — and understand the significance — of selling directly to the consumer, particularly millennials. “It was important for us that [the designer] be open to serving a different customer group. A lot of brands are still focused on maybe someone of an older generation,” Chou continued. “It was important that [he or she] felt comfortable with the digital world.”

But while understanding Bright Fame’s strategy was a crucial piece of the puzzle, the person behind the brand also needed to have star potential. “In this business, the designer’s personality is very important,” Chou said. “We knew Thakoon had what Tommy had and what Michael had; what my father saw in both of them.”

Thakoon, according to Chou, fit all of the requirements. “First and foremost, I think Thakoon is very talented,” she said. “His point of view and his vision were very much in line with what we wanted to build.” 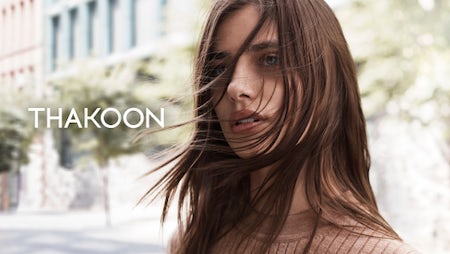 What exactly they want to build is a designer-level brand that employs the drip-feed like cadence of new product that today’s consumer, constantly inundated with information and inspiration, seems to prefer. That means four seasons — sensibly named Spring, Summer, Winter and Fall — with six product drops per season. While the number of SKUs Panichgul is designing has only increased by approximately 10 to 15 percent, there will be newness in the store every couple of weeks. The 10 to 15 percent accounts for what he is calling “pillars,” or signifiers of the Thakoon brand, including certain prints, as well as twists on classic shirting and jersey styles.

“The value that we’re selling is really hinged on newness and scarcity,” said Lucy Yi, the company’s president. “The scarcity piece is what we consider to be the industry’s problem of being overly promotional. We believe the [combination of] newness and scarcity is the recipe for full-price selling. We bought very tightly so that the customer can understand the value of having limited quantities that are available for purchase.”

The window of time a product will be available for purchase will follow suit. “We aren’t showing product for a full season,” Yi continued. “We will remove goods in a shorter window of time, and we’ll never go on sale.”

In turn, production turnaround times are also shorter. “There are still a lot of factories that may not be working in the fastest way possible, especially at the designer level,” Chou said. “We’ve been very lucky to be able to steer the way we want to. Of course, every day we’re working to shrink that time frame while still maintaining the quality we desire.” With the old model, about half of Thakoon’s production was done in Asia, with 30 to 35 percent in the US and the rest in Europe. Today, the vast majority of the products are made in Asia, with some small runs in New York.

Indeed, what Panichgul, Chou and Yi — who joined the company one year ago from Ralph Lauren — are most eager to communicate is that this venture is not fast fashion. “We are built on a desire to be a ‘designer fashion now’ business,” Yi said. “When you break out these words, it is predicated on the fact that we come up with original designs. The value in the market is in beautiful, original creations, not knock downs.”

We are focusing our efforts in trying to build the next best American designer brand.

Indeed, the company plans to listen as closely as possible to what customers want. For instance, while the intention is to open more physical stores in the near future, the company will look for online demand signals to help determine specific locations.

Digital will also play a critical role in the brand’s marketing plans. “We’re putting a lot of weight on our team of marketers. Marketing has to drive sales, traffic to our doors and get us in front of our potential customers. The focus is digital acquisition,” said Yi.

To be sure, Yi’s understanding of the digital landscape made her uniquely positioned to head up the business side of the new venture. Previous to Thakoon, Yi led digital teams at traditional brands like Ralph Lauren and Coach, but also spent a good part of her early career in technology, most notably as a project manager at DoubleClick, which is now owned by Google. The company’s longtime chief executive, Maria Borromeo, now based in Hong Kong, has taken up the new role of chief merchandising officer, responsible for product development, production and merchandising. (Borromeo also remains chairman of Thakoon USA.) “Maria helped create this company,” said Yi. “To our benefit, she accepted [the new role].”

Now, the onus is on Chou, Panichgul, Yi and Borromeo, along with 60 employees working out of offices in Hong Kong and New York, to perform. The first test will be the introduction of the brand’s new website in early August, which will start off by selling a small capsule collection of late-summer wares. The website will be followed by the store opening and a show at New York Fashion Week in September, which will feature in-season merchandise.

At the time of this interview, Panichgul was still sorting out exactly what he wanted to do for the show. “In terms of the design, [this new model] is not hard at all. You just have to be a bit more methodical in terms of what you’re putting out there,” he said. “In terms of the show organisation, it’s slightly more muddy. Only because what we’re essentially doing is trying to fit into a week that is meant for wholesaling purposes. For us, it’s a vehicle to showcase the clothes in a way that the consumer wants to see…. Ultimately, I think it’s about doing a show that’s a bit more exciting.”

That’s because, in truth, for many consumers, September will be their first introduction to the Thakoon brand. “While Thakoon is respected and well loved, we still have a lot of work to do on awareness,” Yi said.

So, what does Thakoon want to communicate? “When I first started designing, I had a very precise idea about what I wanted to do. I’ve always been inspired by American sportswear, but I’m half American and half Thai,” said the designer. “I saw things differently, these other influences from the east and Europe, but then mixing that into the American sensibility.”

But market realities forced him away from that vision. “As I moved into my career, gaining more traction, I loved doing prints, but then everyone gravitated toward the prints. They wanted that to be the ‘thing’ for Thakoon. Meanwhile, there were other things that I was doing really well with too, which no one was paying attention to,” he continued. “With this new business mindset, it’s almost like I’m able to go back to where I was before and carve out those other areas that I know that I can do, that I’m good at, and explore a little bit more. It’s really giving Thakoon, the brand, a more well-rounded lifestyle component.”

But even with the right creative vision, production model and marketing strategy, what all of this will take is a tremendous amount of capital. While the financial details of the Thakoon acquisition were never revealed, Chou is quick to emphasise that there is no intention of stopping short of success. “Just know that we are focusing our efforts in trying to build the next best American designer brand,” she said. “We have every intention of supporting the business as much as we need to make that happen.”

Disclosure: Novel TMT is part of a group of investors that holds a minority stake in The Business of Fashion.