BoF spoke exclusively with Gosha Rubchinskiy and Adrian Joffe, president of Comme des Garçons, to learn how the company catalysed the rapid growth of the skater-inflected fashion label.

BoF spoke exclusively with Gosha Rubchinskiy and Adrian Joffe, president of Comme des Garçons, to learn how the company catalysed the rapid growth of the skater-inflected fashion label.

LONDON, United Kingdom — Gosha Rubchinskiy is standing in front of a photographic backdrop of Moscow high-rises, which demarcates the space the designer’s post-Soviet, skater-inflected fashion label will soon inhabit in the basement of Comme des Garçons’ Dover Street Market in London. The retailer is set to reopen this Saturday in the 31,000-square-foot former Burberry headquarters on Haymarket, just south of Picadilly Circus, following a major rent hike at the store’s original Mayfair location.

That Rubchinskiy’s new space, at about 270 square feet, is significantly larger than the space he occupied at the old Dover Street Market, is a testament to the success of the label. The store’s initial buy for Spring/Summer 2016 sold out in two days, sending the brand scrambling to reproduce items from the collection to stock the new space. Indeed, over the last year, sales have grown by 350 percent, according to data provided by Comme des Garçons, which not only distributes the label in its Dover Street Market stores, but operates the business. (The company declined to reveal actual revenue figures). 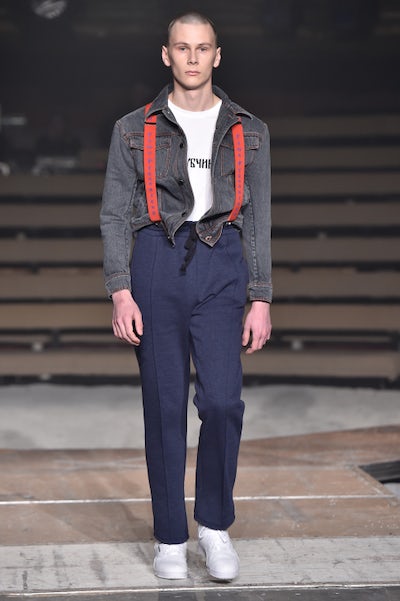 But times weren’t always so good. Indeed, the early days of the label were full of challenges. Rubchinskiy, a budding photographer who largely trained his lens on skater friends and Moscow’s youth scene, never set out to launch a fashion business and his first forays into design, in the summer of 2008, reflected a scrappy, do-it-yourself approach. “We started from making t-shirts — very cheap — and we bought Fruit of the Loom sweatshirts and put embroidery on top. Very DIY. A friend of mine helped to fund the first collection and we made some shirts and denim jackets,” Rubchinskiy recalls.

“For the first local show, my friend from the Solyanka club in Moscow supported me and helped me to rent this sports stadium. I wanted it to be like a performance. It was not about the collection, but about these boys, this generation, this energy. We had 600 people in the audience. No one before did anything like this in Moscow,” he continues. But the business remained completely underdeveloped. “Every piece existed only in one size. We sold or gave it away to friends. There was no business, no money.”

Luckily for Rubchinskiy, Anna Dyulgerova, the former Russian Vogue fashion editor turned creative consultant, selected the designer to show as part of Cycles & Seasons, an alternative fashion week she launched in Moscow in 2009. After a presentation staged at a church-turned-Soviet sports hall, Rubchinskiy attracted attention from a few international media publications and buyers. “I started to receive requests from shops in different countries, but I had to refuse because I only had one piece per size in every collection.”

The early momentum earned Rubchinskiy an invitation to London Fashion Week, where he presented a 12-piece collection produced with personal funds and transported by hand in his own suitcase. But on his return to Moscow, without money, a team or production, Rubchinskiy fell into a period of depression and decided to put his label on hold. “It’s very difficult to start a fashion label in Moscow. Good fabrics are expensive and customs rules are very strict. I started thinking that fashion for me was over.”

I said, ‘Why don’t I make it for you? You design the collection, I make it, I sell it for you.’ This is how it all started.

It was then that Rubchinskiy met Adrian Joffe, president of Comme des Garçons and retail guru behind Dover Street Market. “I was working on my Transfiguration book and thinking about concentrating on photography and video, when I met Adrian Joffe,” Rubchinskiy remembers. The two were introduced by Dyulgerova. “When I went to Moscow she invited me for dinner and she wanted to introduce me to Gosha,” recalls Joffe. “I’ve always loved Russia, the ex-Soviet thing, the language. I was going as often as I could, just going to Moscow to hang out. When I met Gosha, I understood why I loved it so much. This whole post-Soviet movement of people free at last and wanting to launch artistic things — it appealed to me and I thought, ‘This is the guy I’ve been looking for.’”

Impressed with Rubchinskiy, Joffe was keen to stock his collection at Dover Street Market. But what was supposed to be the designer’s big break, instead, led him to financial failure. “We made the collection for Dover Street Market especially because Adrian ordered. It was hell. I spent my own money to produce it in Serbia. Not only didn’t I get any profit, I spent everything on customs, logistics, production and ended up in debt,” recalls Rubchinskiy. 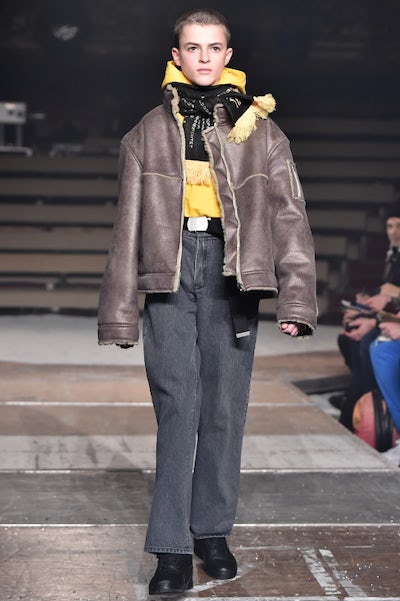 “When we met again, he said, ‘I can’t do it anymore, Serbia is driving me crazy,’” remembers Joffe. “I said, ‘Why don’t I make it for you? You design the collection, I make it, I sell it for you.’ This is how it all started.”

While Rubchinskiy is responsible for the creative side of the business, including the design of the collections, he works within a plan provided by Joffe. “We basically give him a rough structure: three to five jackets, two to three shirts, t-shirts, sweatshirts, joggers, lots of accessories. Within these parameters he’s pretty free,” Joffe explains. Comme des Garçons also manages the production, sales and marketing of the collection.

“I see myself as a friend, a father maybe,” says Joffe. “Of course, it’s business for me, but it’s more than just business.” Currently, the Gosha Rubchinskiy label does not exist as a separate business entity and the Gosha Rubchinskiy trademark, which Joffe registered, is wholly owned by Comme des Garçons. “The trademark is held by Comme des Garçons Paris International,” explains Joffe. “We hold the trademark and produce it, give Gosha money and sell to Dover Street, of course, a few days before everybody else.”

For Rubchinskiy, who is now starting to work on his 10th collection, the relationship with Comme des Garçons has been highly educational. “I learned everything on the business side of running a label — I never studied fashion — so how to produce and sell the collection, how to work with press. I learn every day working with Comme,” he says.

From the start of the partnership, in 2012, sales grew steadily. But the decision to present the label’s Spring/Summer 2015 collection on the Paris runway, in June 2014, set the business on a whole new trajectory. Joffe was cautious and inclined to wait another season or two, but Rubchinskiy insisted the moment was right. “One day he says, ‘We need to do a show’ and I said ‘No, we’re not making any money, let’s go slowly,’” recounts Joffe. “But he said, ‘No, it’s important to do a show.’ And from there it really exploded.”

Today, the company has about 150 stockists worldwide. “Before he sold 10 t-shirts to his friends. For Fall/Winter 2016, the number of pieces was 50,000 and it’s doubled since last year,” reveals Joffe. T-shirts and accessories sell the most. “But even the t-shirt sales come from the meaning,” reflects Rubchinskiy. “It’s about the meaning created around the t-shirts. Guys come to the store and buy a t-shirt, because they want to buy part of Gosha, part of this energy, part of the story,” he continues. “The main idea is the beauty of Russia and its new generation.” Content plays a big role in imbuing the label with its significance and Rubchinskiy still produces books like Youth Hotel, a limited-edition, 118-page volume of photography, alongside his collections. 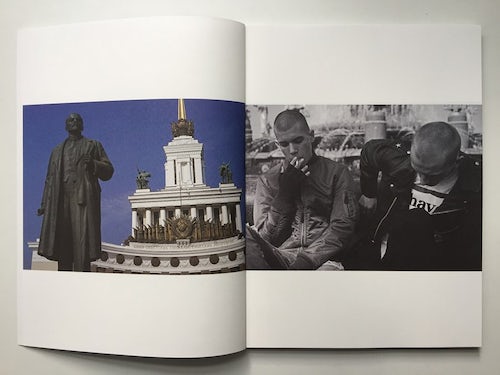 “It was his photography, his view on life in post-Soviet Russia,” says Joffe on what first drew him to Rubchinskiy. “I don’t see him as a fashion designer, but as a photographer, a recorder of things. I think to me it hit a nerve because of its authenticity. Lots of start-up brands see Supreme and want to do a similar thing, but it often doesn’t ring true; it feels fake or contrived. With Gosha, it feels very natural. I think it’s because there is one vision, which ties everything together. From the clothes on the runway to the books, everything is one. It’s all coherent, all one idea, one eye and it links the whole story together.”

In June, Gosha Rubchinskiy will show in Florence, Italy, as this season’s guest designer at the Pitti Uomo tradeshow. “I wanted to do something unexpected,” says Rubchinskiy. “A Russian designer showing streetwear at Pitti — that’s definitely something people don’t expect to see.” Alongside his clothes, Rubchinskiy plans to unveil a new book and video. “It’s going to be about Italian history and bringing Russia to Italy, the story of how he loves the buildings and filmmakers of Italy and how he wants this to meet this thing from Russia,” adds Joffe.

But fashion’s current fascination with the raw energy of the post-Soviet states — reflected not only in Rubchinskiy’s success, but also in the rise of Georgian designer Demna Gvasalia of Vetements and Balenciaga, with whom Rubchinskiy shares the stylist Lotta Volkova — won’t last forever. What happens when the trend passes and attention inevitably shifts elsewhere?

“I do things about Russia because I grew up there and those are the things I really know,” says Rubchinskiy. “But I always try to speak with my collections, not just about Moscow. I try to feel what is the moment. I speak a universal language, although with a Russian accent.”