Could the Farfetch Model Work for Skate Shops?

With backing from José Neves and Ian Rogers, two former Burberry and Adidas executives are hoping their platform, Parade, brings new customers to the skate community in an authentic way.

Could the Farfetch Model Work for Skate Shops?

With backing from José Neves and Ian Rogers, two former Burberry and Adidas executives are hoping their platform, Parade, brings new customers to the skate community in an authentic way.

LONDON, United Kingdom — Among the male models who walked the runway on Thursday in Paris for Virgil Abloh’s latest collection for Louis Vuitton, one might have stood out to at least part of the audience: London skater Lucien Clarke, known for his relationship with the wildly popular streetwear brand Palace. His presence is just another indication of fashion’s love affair with skateboarding culture —one that has been growing for years and crescendoed with a 2017 collaboration between Louis Vuitton and Supreme.

Today it’s not surprising to come across top streetwear brands in fashion shops like Dover Street Market or Opening Ceremony. But now a new company is aiming to make it easier for all types of skate fans to shop from local, skater-owned skateshops — the homes of the vibrant subculture where the price of a deck has remained largely unchanged for 30 years.

Parade is an invitation-only marketplace that uses the Farfetch model (facilitating sales without holding inventory) to plug into 16 skate shops across the UK, like Slam City in London and Focus in Edinburgh. The company plans to expand into the US by the end of this summer and Japan next year, and currently ships to over 40 countries. Parade handles customer acquisition, marketing, shipping logistics, returns and customer service and takes a commission on each sale; its founders declined to say how much but said it starts at market rates, which are typically around 15 percent based on Farfetch's initial rates. 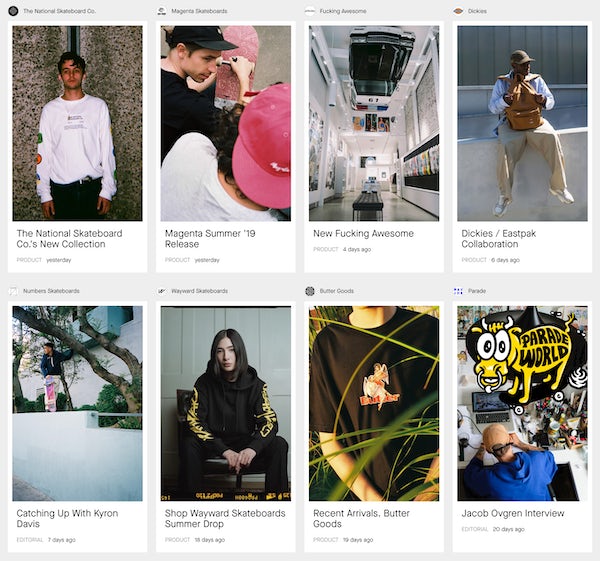 Craig Smith first came up with the idea for Parade when he met Neves nearly a decade ago and realised that the marketplace model could work for the skate community, where skater-run neighbourhood shops serve as community hubs for young and professional skaters. Despite easy access to online commerce tools like Shopify and Instagram, many of these small businesses never built online stores.

“When it comes to translating what they do offline online, it’s really, really tough,” said Smith. “These stores are missing out on the online consumer, which is year-on-year growing.”

Many skate shop owners don’t have the digital expertise to win the competitive game of online shopping, where customers have increasingly high expectations about service and delivery, typically because shop owners came to the business through a personal love of skateboarding, instead of business ambitions, said Smith. Daphne Greca, owner of Brixton’s Baddest Skateshop, said shipping costs were the biggest barrier for the store online, and she didn’t have the time to manage sales via other platforms like eBay or Depop.

Parade’s launch is either right on time or even too late. Skateboarding, known as a counterculture activity for young people who feel like outsiders, is seeing an upswing in mainstream popularity. Parents no longer discourage it, and the sport will be in the Summer Olympics for the first time in Tokyo next summer. As of 2016, there were over 6.44 million skaters in the US, according to the Outdoor Foundation. Interest in skateboarding from a fashion perspective has peaked, too: London’s Selfridges opened up a free indoor skate bowl last year — just one example of a mainstream retailer championing streetwear brands to get shoppers through the doors.

When it comes to translating what they do offline online, it’s really, really tough.

Noah Johnson, the style editor at GQ magazine, said there are already plenty of ways to sell skate brands to consumers outside the community. “I don’t really know how much more appetite there is,” he said. “A lot of the coolest skateboard brands are out there and available in fashion stores and elsewhere.”

But he said there is a market to bring apparel and hard goods to skaters globally who do not live near a skate shop, particularly a very well respected one. While many shops sell the same brands, those with the best reputations are able to land the most coveted — and limited distribution — brands, like Palace.

“Anything [skate shops] can do to sell more apparel is good, because that’s where they are making more money,” said Johnson.

The reputation issue illustrates the particular challenge of doing business in the skateboarding world. The community of core fans have seen their subculture grow into a global phenomenon that has hit luxury and beyond, and is skeptical of new players in the space who may not actually participate in the sport. Skater-owned brands fear being perceived as “selling out.” And following the unexpected growth of Supreme — which started as a skate shop in 1994 and has since become a $1 billion brand on the strength of its own label — retailers from outside the skateboarding community have tried to enter and find the same success, only to miss the nuances of the way real skaters speak, communicate and design apparel.

But Smith and Chester are hoping Parade can work because they understand these sensitivities and are part of the community themselves — particularly Chester, who worked directly with skaters at Adidas and has relationships with many shops. The brands they offer on the site are amongst the more fashionable of the streetwear set —Fucking Awesome, Magenta, Polar, Quasi, WKND — but they also offer a significant range of hardware. Parade’s editorial content and magazine also serve as a way to further demonstrate commitment. Recent articles include interviews with Dan Magee, the videographer and founder of Blueprint Skateboards, and lists of events hosted by its network of shops on Go Skateboarding Day, June 21.

Greca, of Brixton’s Baddest Skateshop, said she considers Parade a skater-owned business because Smith and Chester are known entities in the community.

“If it was two random people who didn’t skate and said, ‘We have this idea,’ I don’t think we would have gone with them,” she said. “It’s like trying to push a vegan business and eating meat every day.” Greca said the shop’s online orders have increased fivefold since it started selling through Parade instead of just its own online store.

Smith acknowledged there was some initial apprehension from skate store partners who worried Parade would cannibalise their existing customer base but said the soft launch has proved the platform can bring them a new audience, including shoppers who live outside major cities, and non-skaters more accustomed to hunting for niche streetwear brands online.

Skateboarding is a very precious thing and what we are trying to do is very ambitious.

“Our job is to support the stores,” said Smith. “Skateboarding is a very precious thing and what we are trying to do is very ambitious.”

Like Farfetch, which facilitates sales from fashion boutiques across the world but also increasingly ships directly from labels, Parade plans to also sell inventory directly from brands. But it will focus on those that aren’t readily available through skate shops or heavy-hitters along the lines of Adidas and Nike that can bring significant awareness to the marketplace through co-marketing. Skate shops already struggle to compete with those non-skater brands which can easily undercut their prices and offer a wider assortment of products.

Parade also plans to be a liaison between mainstream brands looking to tap into the "cool factor" around skating and the brands and shops at the centre of the community. The founders can help them understand it is important “to be seen in the stores and supporting skateboarding at the grassroots level,” said Chester.

“We need to make sure it’s authentic and that we don’t sell out either, because our job is to manage this ecosystem that we are trying to translate, that is predominately offline but also online,” said Smith. “Let’s make sure they can do it correctly. And if we can get some cash from these brands that helps the skate shops in some way, I think the stores will recognise that."

Parade’s founders also want to scout the next great streetwear brands, the Supreme’s of the future, which are now more likely to be born online than in a skate shop.

“Tomorrow’s brand may not be seen by a skate shop because there are so many brands these days,” said Smith. “We are hoping we can find those next brands... and ensure that the skate shops are part of that evolution.”

How Vans Keeps Its Cool