Millennials and advertisers are at the heart of Elle UK’s refresh, which owner Hearst UK is hoping will replicate the success seen from its Cosmopolitan reboot last year. 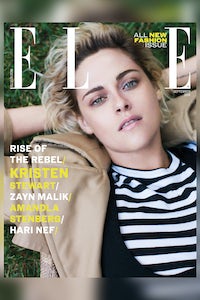 Millennials and advertisers are at the heart of Elle UK’s refresh, which owner Hearst UK is hoping will replicate the success seen from its Cosmopolitan reboot last year.

LONDON, United Kingdom — “Curated, very sparse, very minimal” is how Lorraine Candy, editor-in-chief of Elle (UK), describes the new look of the brand's print magazine, which has been relaunched to not only reflect the changing demands of its readers, but also of its advertisers.

The new layout, which features a pared back look with just a few words on the cover, is a reflection of where the magazine wants to focus in its next chapter as it continues to evolve against a challenging backdrop of falling print advertising sales and circulation figures.

Candy, who has been at the helm of the Elle for 13 years, told BoF she wanted to celebrate print as a medium and take the magazine back to its creative roots, with beautiful imagery and thought-provoking content that encourages discussion amongst its readers.

“Reading a magazine is a luxury experience. It’s a lean-back, fully immersive experience and I think that is what you want when you read a print product,” she said.

But the relaunch of Elle was also an opportunity to reposition the magazine towards key advertisers, whose attention may be focused on growing audiences on social media and online rather than via print.

Last year, only 60 UK magazines grew their sales, out of 442 audited by ABC. Across the magazines ABC surveyed, circulation was down 4 percent year-on-year in the last six months of 2015.

“We need to service our advertisers much harder than we have ever done before and we wanted to create something that was as beautiful as the campaigns that we were creating… We needed it to stand out amongst the other magazines in the market,” said Candy.

Elle's refresh follows in the footsteps of its sister publication Cosmopolitan, which recorded a 57.3 percent year-on–year increase after its relaunch last year, helping catapult the title to becoming the highest circulating women’s glossy magazine in the UK.

Hearst UK, which also publishes the UK editions of magazines including Harper’s Bazaar and Men’s Health, said the change would signify a new direction for the magazine’s distribution as well as its editorial content across its print and digital platforms.

Part of its plans include allowing readers to “print-on-demand” by pre-ordering copies of the magazine with a cover star of their choice between July 1 to 6, four weeks before its main September issue hits the newsstands.

Customers can choose from five different cover options, featuring actresses Kristen Stewart, Amandla Stenberg and Hari Nef, or singer Zayn Malik, who have all been chosen to appeal to various communities and fan bases amongst the magazine’s readers, as well as a bespoke art cover.

Another key focus for Elle was signing brand partnerships with retailers like Matchesfashion.com and Space NK to distribute its magazine in stores, as well as at key events like London Fashion Weekend and key festivals. This was a big part in connecting with the Elle reader, said Candy.

“We want to deliver it to her and we want to say to the advertiser we are delivering it to a woman who is really valuable to you,” she said.

“We want to be in the places where she is spending money, where she is thinking about fashion… and where she is going to be receptive to our advertisers messages within our print product, and we want to create a new relationship with her.”