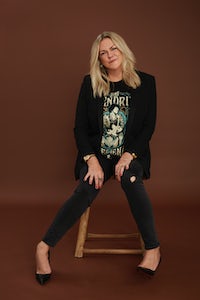 FLORENCE, Italy — "If you are in accessories you know Il Bisonte. It is the gold standard in vachetta leather," says Emma Hill, the founder of Hill & Friends and former creative director of Mulberry, who has joined the Italian leather goods company as consultant creative director.

Founded in 1971, Il Bisonte's specialisation "vachetta",  is untreated calf leather which absorbs natural oils, causing the hide to slowly darken in colour through use. Headquartered in Florence, with production facilities situated about 30 minutes from the city centre, Il Bisonte is now distributed through over 50 points of sale, including a small number of directly-operated retail stores and its own e-commerce site.

Hill's appointment at Il Bisonte follows investment by Palamon Capital Partners into what was one of Italy's last remaining independent heritage leather houses in June 2015. In her new role, Hill has created a capsule collection of eight accessories, aimed primarily at women, set to launch in late February.

"Il Bisonte is looking to add some contemporary spirit to the collection, reinterpreting the original spirit of innovation and creativity," says Il Bisonte's new chief executive Sofia Ciucchi, who joined the company earlier this month from her role as general manager of Salvatore Ferragamo.

Il Bisonte is now best known in Japan, where the country's sophisticated fashion consumers respect the craftsmanship and restraint of what is more a classic piece of design, rather than a fashion product. However, Ciucchi is now eager to reintroduce the brand to further international markets with the help of Hill's capsule collection.

"In this sense, we think that Emma is the best designer to interpret that spirit. She has a very strong sense of materials, she really appreciates craftsmanship and knows how to deal with functionality. She is very contemporary with her attitude and her spirit."

Hill, who continues to design for her 18 month-old namesake label, Hill & Friends, says the appointment came about unexpectedly, when a former colleague with whom she had recently reconnected with at children's swimming meets, called her out of the blue.

"It is such a nice thing to take on, and a personal brand for me," Hill tells BoF. "Il Bisonte is a brand that has always meant a lot to me. When I lived in New York,  I always used to go in to the Il Bisonte store, which was so artisan and just amazing. The brand was born in the 1970s, almost at the same time as Mulberry, so it has got that kind of 1970s anti-fashion fashion character," she explains.

This collection was certainly never intended to be some kind of jewel in the crown, it is all about the brand, it is not about me.

Ciucchi hopes to utilise Hill's designs to build traction in potential growth markets. "Over the last couple of decades, Il Bisonte has grown a lot in Japan and has a very strong image thanks to a very simple functional design. We want to continue to nourish this market, but we would like to also add a new commercial and marketing drive in different markets, which were originally important to Il Bisonte: the US, Europe, France and Italy. The key of what Emma is doing [for the brand] is that we would like to open up new markets and different types of customers," Ciucchi explains.

For her first collection, Hill says she has embraced all of the hallmarks of Il Bisonte designs. "It is all in vachetta, [and] for the first season it is all in their existing colours," she says. " You can have the bags monogrammed, referencing their heritage of embossing. The craftspeople wear amazing leather aprons, covered in pockets for different types of tools, so I took that and used that for the inside pockets and there is a unisex bag that has all of the pocket-ry on the outside."

Il Bisonte's bags are accessibly-priced, and it was important to both Il Bisonte and Hill that the existing price point be retained in the new capsule collection.

"The average price of this collection is about €400 ($429), the boundaries have been pushed a little bit at the top end in terms of pricing... [but] it was certainly never intended to be some kind of jewel in the crown. Really it is just my little take on the amazing things they already do. They have an enormous body of work already. It is all about the brand," says Hill.