NEW YORK, United States — Meredith Melling and Valerie Boster, the former American Vogue editors who departed the magazine in 2013 and launched fashion consultancy La Marque in January 2014, are stripes and lines fanatics. “Meredith and I have had a lifelong obsession,” Boster explains. “It’s a graphic that’s timeless, democratic and universal. But there really wasn’t someone out there owning the stripe.”

This obsession-meets-opportunity was the spark for La Ligne, the new label the pair have created with chief executive (and Rag & Bone alumna) Molly Howard, to whom they were introduced in 2013. The label launches on its own website Lalignenyc.com on April 5 and will be available on Net-a-Porter the week of April 11. 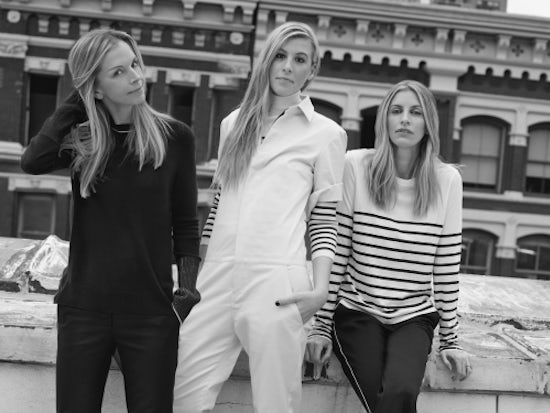 “[Given] all my work with the CFDA/Vogue Fashion Fund and those designers, I was very well-versed in the challenges of getting a brand up and running,” explains Melling, who is the company's chief marketing officer. “While Valerie and I had a lot of inspiration, it wasn’t until we met Molly that the nuts and bolts started to come together.”

Although the collection, which begins at $85 for a tank and tops out at $550 for a silk viscose dress, will be sold by Net-a-Porter, this wholesale relationship is an exception for a brand that will be predominantly direct-to-consumer.

“We wanted to get a very, very high quality product to our customer at a price point that was more in line with where it should be without having to deal with the double markups,” says Howard. “We also love that we have such good access to data about our consumer, what they’re loving and not loving, and you can design and evolve the collection around that as opposed to designing for a retailer, which I know can be a struggle for a traditional fashion brand. And we wanted people to be able to see it and buy it [immediately].”

The trio have spent the last year developing the garments, more than half of which are produced in New York City. “Product with a cool sensibility and aesthetic is always going to find its place in the market. Between the three of them, they’re going to have a great idea of what their customer wants and I  can already see that in the clothes and concept,” says Neville, whom Howard worked under at Rag & Bone. “[Going direct to consumer] really helps the challenges around seasonality that the older model is facing currently. They can fight against that in the way they are approaching their customer." 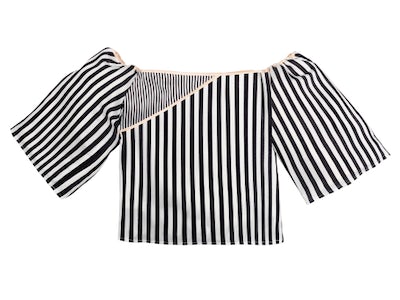 La Ligne is split into two ranges. The first — the Essentials line — will be available year round and includes items such as a short-sleeved t-shirt printed with what the label hopes will become its signature wavy stripe ($95) and a 100-percent cashmere sweater with elongated cuffs and contrast ribbing ($275). The Edition range will be released twice a year, in spring and autumn. The first collection features lightweight blouses, kaftans and slip dresses decorated in grey-and-white intersecting stripes of different widths, with many pieces piped in blush. One item in particular, a $335 off-the-shoulder top in silk viscose, exemplifies the seasonal quality of the range. The team also plans to introduce other items throughout the year to keep the site fresh.

In one way or another, every piece will incorporate stripes, although some items will reference the idea more loosely, using fringe, insets or pleating. For instance, a solid-colour flight suit from the Essentials line is detailed with cotton twill tape on the center-front placket, sleeve cuff and the interior of the pant hem. The founders have also established a colour code for the brand, relying on a palette of black, navy, cream, white, royal blue and blush pink.

As well as their obsession with everything linear, running through both lines is a strong desire to position La Ligne as less All-American prep and more French je ne sais quoi, à la Françoise Hardy. “It’s our tribute to the European aesthetic,” says Boster, whose title is creative director. A ringer t-shirt, for instance, is delicately embroidered with the phrase “I’m with la bande,” while every pink-hued hang tag is printed with a cheerful “Merci!”

Given Melling and Boster’s background in magazines, it’s not surprising that storytelling is essential to La Ligne’s messaging both on and offline. The site’s inaugural editorials star supermodels Joan Smalls and Lily Aldridge, the latter of whom Melling and Boster style for the red carpet via their La Marque business. (For the time being, the duo plan on continuing to offer that service, although Boster emphasises that “La Ligne is our life.”)

To further acquaint customers with the collection, La Ligne created a portrait series called “In Line,” enlisting 40 women of varying backgrounds, professions, personal style and ages — including art director Sofia Sanchez de Betak and actress Allison Williams — to self-style the pieces and complete a questionnaire, called “Line by Line”. Their handwritten answers will be featured alongside their images. (The first six will be released at launch, with two more every week thereafter.) “A big part of our branding is this human element,” Boster explains. “Even our logo has a hand-drawn line” — which is used on the aforementioned signature-stripe shirt — ”and our secondary mark is two hand-drawn lines.”

In a similar vein, friends of the brand — including stylist Sophie Pera, full-time mother Pollyanna Rose, and model Selina Khan — have stepped in as the product-page models and were shot against a striped set. “We focused a lot on the content experience on the website,” Melling says. Each product page will feature two additional styling suggestions for every item, pairing pieces from the collection with wardrobe staples, like jeans.

The trio are confident that the price and quality of their collection — as well as the support of Net-a-Porter and their vast network of influencers and industry insiders — will be integral to its early success. For the moment, however, they don’t plan on spending a significant amount of money on paid marketing, an element of business that has become crucial for the survival of direct-to-consumer, e-commerce brands over the longer term.

But, La Ligne’s ambitions don’t end at selling women’s fashion online. The roadmap includes physical retail and category expansion. “We want this to be a total, lifestyle, everything-striped brand: That means men’s, home, sport, kids,” Howard says. “But I think a trap that many companies fall into is biting off more than you can chew at the beginning. We will launch with our website, and we will eventually open a store. But it’s really important to us that we just nail everything exactly.”