The hip Shoreditch boutique Hostem is set to move into womenswear with a 6,000 square foot addition. BoF spoke with 25 year-old founder James Brown to learn more about his expansion plans.

Hostem’s 25-year old founder and owner James Brown told BoF, “Womenswear is a much bigger business when it comes to fashion as a whole. We’re very confident and proud with what we’ve achieved with our menswear, but it’s at a point now where if we’re to expand and grow and develop as a brand, womenswear is the key. But we wanted to do it in a way that made sense to us and was meaningful. That’s why we’re doing it on such a big scale.”

Indeed, to create the women’s areas, the store has literally added two floors to the building which Brown acquired in 2011. For the womenswear extension, Brown turned to Hannah Plumb and James Russell, interior designers of the original menswear spaces. But in sharp contrast to the rustic tactility of those areas, which feature salvaged Victorian floorboards and antique light fixtures emitting a soft amber glow, the womenswear floors will be characterised by a more contemporary, open and minimalist aesthetic.

“It’s going to be far more industrial. We’re laying 3 and a half tons of steel parquet flooring by hand. Part of the space will have 20-foot high ceilings, and the walls will be covered in polished white plaster.” He said it was a conscious decision to locate the women’s areas on the top floors, so as to emphasise a sense of intimacy and to create private, secluded universe for Hostem’s new female customers. Hostem will also unveil a roof terrace featuring panoramic views of London, which Mr Brown plans to use for store events. 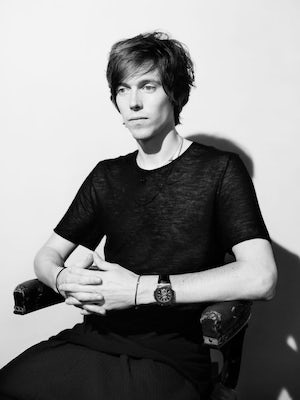 But what about the clothes? Brown says the women’s product offering, too, will differ from the dark, deconstructed aesthetic the store’s menswear buy has become known for, veering towards more refined pieces from Yohji Yamamoto, Junya Watanabe and Rick Owens and emerging designers such as Faustine Steinmetz and Phoebe English.

According to figures provided by the company, Hostem is on track to generate £4 million in revenue by the end of 2013, reflecting an average annual growth of 35 to 40 per cent year-on-year since 2010, which the company is hoping to double with the new womenswear business.

But Hostem’s growth also signals the further consolidation of Redchurch Street, and of Shoreditch in general, as a luxury shopping destination that can attract customers from West London and abroad.

“When we first opened there was no retail in the area. The street hadn’t taken off. But now we’re noticing a lot of customers coming from West London,” says Brown. “They are asking their friends or concierges for something a little bit different and perhaps more interesting.”

But still, 90 per cent of Hostem’s clientele are repeat customers, including members of the area’s thriving creative community,  successful local artists, and style-obsessed employees of nearby design and tech companies like Mother, the creative agency, and Google. “We are very fortunate to have a huge thriving creative industry on our doorstep that has been very supportive.”

And, the booming little store is also looking at the online opportunity. “Starting in September we are relaunching our whole digital strategy. The challenge has been to replicate the very personalised experience we offer in East London online.” Mr Brown says that he never intended for his shop to be a full-scale online retailer, estimating that 80 per cent of his business is done in-store.

“First and foremost we wanted to be and very much still are a bricks-and-mortar store, that’s what sets us apart.”