Part 2: The Deal of a Lifetime

How did Federico Marchetti manage to strike the ‘deal of a lifetime’ with Richemont to get the YNAP merger done at such favourable terms?

Part 2: The Deal of a Lifetime

How did Federico Marchetti manage to strike the ‘deal of a lifetime’ with Richemont to get the YNAP merger done at such favourable terms?

LONDON, United Kingdom — In 2009, Federico Marchetti, founder and chief executive of Yoox, was contemplating an initial public offering on the Borsa Italiana in Milan. Having observed the growth of Net-a-Porter since the very beginning, he thought the businesses might be an excellent fit for a merger. It was then that Marchetti first approached the Net-a-Porter team with the idea, which they eventually rejected. While they may have understood the rationale, they thought it would be difficult to align their key stakeholders — Richemont and Carmen Busquets — around a deal, especially due to the ongoing tensions.

But in the process of speaking to the Net-a-Porter team, Marchetti had become even more convinced that a merger would be beneficial and it became one of his key professional goals — almost an obsession — to make the deal happen. If not now, then at some point down the road.

Meanwhile, Richemont had left the Net-a-Porter management to their own devices. According to one source, Richemont was not actively involved in the business at all: “Johann Rupert made one visit in the summer of 2010 and did a town hall meeting with Natalie. The whole company came and he was brilliant. All the people thought they were hearing from the oracle.”

But soon, tensions grew again — this time over Net-a-Porter’s financial performance. While Net-a-Porter revenues continued to grow, reaching £368 million by 2012, the company was hit hard that year due to overbuying. Profits took a big dive and the business dipped back into the red in 2012.

Net-a-Porter was also investing heavily in a Hong Kong distribution centre, translating the site’s content into multiple languages and preparing for the launch of Porter, a glossy print magazine that would launch in 2014. General and administrative expenses increased by a whopping 81 percent in 2012, weighing on the company’s bottom line.

This was worsened by the fact that Richemont began charging Net-a-Porter with an unanticipated group shared service charge of about £10 million a year, beginning in 2013. In addition, the company was required to account annually for the cost of the £100 million growth share charge to be paid out to Massenet and the management team in 2015. And due to an accounting error, the cost of this share charge was overstated in the early years, further reducing the company’s profits as reported in its statutory accounts.

This led the wider industry and media to believe that the Net-a-Porter business was in much worse shape than it really was and further damaged the working relationship between its management and Richemont.

“Richemont never corrected this [impression],” says one person familiar with Richemont and Net-a-Porter's relationship at the time. “When you have your parents and they are no longer sticking up for the children, the children begin to defend themselves. You start to realise that your adopted parents don’t love you like you thought they did. It becomes personal at that stage.”

Indeed, if the unanticipated charges were removed, Net-a-Porter would have been profitable — not losing tens of millions of pounds. In the company’s 2013 statutory accounts, for example, Net-a-Porter reported an operating loss of almost £24.7 million. The growth shares-based payment charge for that year was £31.3 million and the Richemont service charge was £9.6 million. Adding back these charges implies an operating profit of £16.1 million, representing an operating margin of 3.7 percent — perhaps nothing to write home about, but a profit nonetheless.

Still, Richard Lepeu and Gary Saage, now the Richemont representatives on the Net-a-Porter board, made the decision that the best thing to do would be to de-consolidate Net-a-Porter from Richemont, whose core businesses, focused on luxury watches and jewellery, were inherently more profitable than Net-a-Porter.

Says one person familiar with Richemont’s thinking: “The margins at Richemont are significant, but you don’t see that at Net-a-Porter because the business model is different. It’s not fully vertical. You’re buying from suppliers, you’re warehousing. It’s a completely different business model and Richemont didn’t quite understand that. They struggled with the margins the whole time.”

So, in September 2012, Lepeu and Saage asked Net-a-Porter to revisit the merger with Yoox. “They could see the businesses were complementary and had various meetings with [Marchetti], and hired lots of lawyers and bankers trying to find the right structure and proportionate valuation, et cetera,” said another person familiar with the conversations. But the Net-a-Porter team are said to have found their interactions with Marchetti and his team extremely challenging and “it became quite difficult to see how it was going to work. So they told Richemont that they were really uncomfortable and didn’t like it.”

Lepeu then encouraged Net-a-Porter to speak to General Atlantic, the private equity firm, again. These conversations failed to result in an offer that met management’s expectations. A subsequent offer from Yoox was also underwhelming, partially because the Net-a-Porter business was not performing well at the time and Yoox, a publicly traded company, could not justify a higher offer.

Eventually, Lepeu and Saage became more forceful. Lepeu invited Massenet to dinner with Marchetti in July 2013 and informed her that the Yoox deal was going to happen, with or without her cooperation. Due diligence was to start in August 2013 while most of Yoox’s and Net-a-Porter’s executives were on holiday.

Massenet expressed her reservations all the while, but Richemont kept pushing. Then, according to one source, it emerged that senior Richemont management had already signed a deal memo with Marchetti some four months prior, without disclosing it to Net-a-Porter management. At that stage, Massenet was preparing to resign, but when the Yoox deal was suddenly called off, following a fiery Richemont board meeting, she stayed on.

From this point onwards, any semblance of a constructive working relationship between Richemont and Net-a-Porter's management effectively evaporated. With the timing of the put-call agreement only 18 months away, the company's minority shareholders hired Morgan Stanley to work on a business valuation and began to actively think about its future outside Richemont.

In March 2015, when Richemont and Yoox announced the merger with Net-a-Porter at a valuation of about £950 million, it was considered a huge victory for Marchetti. Indeed, several experts, analysts and people with direct knowledge of the merger and its financial terms say that there is no doubt that Marchetti emerged as the biggest winner in the wake of the feud between Richemont and Net-a-Porter. 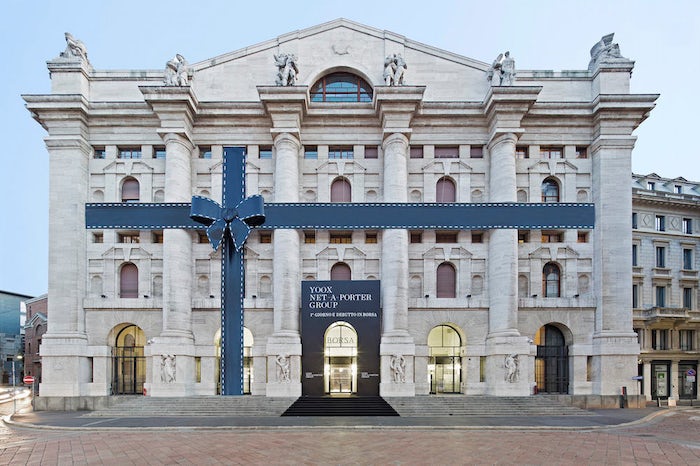 “He did his job,” says one of Busquets’ advisors, of Federico Marchetti. “His shareholders should adore him. He is the winner of the entire thing. I take my hat off to the guy for the brilliance of what he pulled off.” Several people, on both sides, who spoke to BoF, echoed this point of view. It was the deal of a lifetime.

In the months following the merger announcement, Yoox’s share price increased more than 40 percent. This, however, did not affect the deal done with Marchetti, or the price paid by Yoox. While some analysts have attributed the share price increase to the projected synergies from the merger, the Net-a-Porter side insists that the entire increase cannot be explained by synergies alone, and that the jump comes also comes from the fact that Yoox paid a low price and was getting such a good deal.

This begs a question which remains unanswered: why exactly would Richemont agree to sell the business for less, when a higher offer was on the table?

“You would think that what protects the minority shareholders in Net-a-Porter is that the majority shareholder wouldn’t dream of selling out unless at the top of the market. So, why that has happened I don’t know,” says Lord David Gold, a prominent ethics and governance lawyer, hired by Busquets to explore her legal options.

“The number that was given was a number calculated by Richemont themselves. And the banks, without undertaking any due diligence or examination, said, ‘Yes that is fine,’ and gave the impression that was their number,” asserts Lord Gold, speaking on Busquets’ behalf. “They made no approach at all to the company itself to get any financial information,” he claimed. (Richemont declined to comment on the valuation of Net-a-Porter and BoF could not independently verify this assertion.)

Other observers say that Richemont was simply focused on the long-term value of this asset, and was therefore willing to take a lower price now to get the deal done in hopes of a capturing a bigger upside over the long-term. “Clearly Richemont have decided that they don’t want to sell the business now. They’ve clearly taken the view that the best value of the future of the business is in combination with another almost identical business with a complementary but different path to Net-a-Porter,” says one person familiar with the conversations.

Indeed, for Richemont, owning fifty percent of the largest player in the fast-growing luxury e-commerce sector had long-term strategic value for the conglomerate. What’s more, since the day of the merger, the market capitalisation of YNAP increased from about €3.7 billion to a peak of about €4.6 billion on 7 December 2015. At the time of publishing, the market capitalisation of YNAP was around €3.9 billion.

Says another legal expert who has reviewed the Yoox shareholder documentation, on Richemont's motivation to proceed with the merger with Yoox: “You have a potential partner who is pretty solidly protected and himself doesn’t need to do a deal unless it’s exactly on the terms that he wants. That’s why [Net-a-Porter] ended up where they did. And it’s also why there was never any question of another deal at a higher value being considered.”

The source continues: “Had [Richemont] gone through an open bidding process, they would have lost the Yoox deal, because Federico would never have agreed to do a deal where Yoox ended up as the minority partner. It simply wouldn’t have been possible for him, from a legal perspective, to agree to that.”

What's more, Richemont had reached a point where their main priority was to exit — even if it meant doing so at a lower price, according to another person with knowledge of Richemont’s thinking at the time. “The relationships had deteriorated so much and the money being made was already so significant that they did the deal anyways, which is just mind boggling,” said this person. “They just wanted to get rid of it and be away from this business model that didn’t work with the functioning business model of the group.”

But for Marchetti, securing the deal at a good price, with controlling voting rights in one of the most prized digital companies in the industry and a significant golden parachute, was a huge victory, putting him in the pole position to win the e-commerce race that's heating up across the luxury industry.

What does the future hold for the new entity? Will the Yoox-Net-a-Porter merger succeed, and now that Massenet has exited the company, what will she do next? To read Part 3, click here.