The designer duo’s Autumn/Winter 2017 collection was their last for the house. The future of the brand’s creative leadership is unknown.

PARIS, France — Sébastien Meyer and Arnaud Vaillant are leaving Courrèges. The designer duo’s Autumn/Winter 2017 collection was their last for the French house. The decision was mutual, according to a statement released by Courrèges.

A successor has not yet been named. According to the statement, François Le Ménahèze, who was named president of Courrèges in April 2017, will announce the brand’s new creative leadership when a decision has been made.

Meyer and Vaillant were hired in 2015 by French advertising executives Jacques Bungert and Frédéric Torloting, who acquired Courrèges in 2011 from the brand’s namesake founder André Courrèges, a civil engineer-turned-designer once known as the “Le Corbusier of Couture,” and his partner Coqueline. 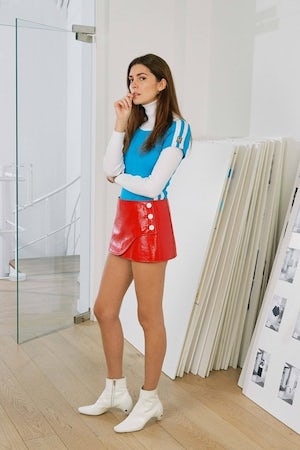 The new designers were tasked with resurrecting and modernising Courrèges, best known for its mid-century modernist heritage. Their approach was unorthodox in a number of ways. At the show for their debut Spring/Summer 2016 collection, the designers gave an introductory speech explaining that the outing would feature no full looks, that only 15 items would be available (but in 15 variations of materials including suede and leather) and that a ribbed, knitted bodysuit would act as a canvas for the entire collection. Simplicity and a product focus became fundamental values of the brand. “We felt too much information and too many choices are major issues in a woman’s life in 2016,” said Meyer and Vaillant at the time.

The collection was picked up by the likes of Colette, MatchesFashion and Bergdorf Goodman. But in the seasons that followed, the designers struggled to thrill critics and the mission of reviving a heritage brand that was often unknown to consumers outside of France proved challenging commercially.

To focus fully on their roles at Courrèges, the duo set aside their own label, Coperni Femme, which won the First Collections Prize at ANDAM in 2014 and was shortlisted for the LVMH Prize in 2015. According to the company, the two designers — who met in 2009 at Mod’Art International Paris, where Meyer studied design and sewing and Vaillant focused on business and fashion management — will now focus on “new creative projects.”