In Australia, Talent Amidst Flux

SYDNEY, Australia — The conversation swirling around Mercedes-Benz Fashion Week Australia (MBFWA) was about anything but the clothes. Skinny models, skinny models wearing t-shirts with political hashtags, hour-late shows and the uncharacteristic drizzle dominated the front row chatter in Sydney, as well as the headlines in local media. And with the likes of Zimmermann and Dion Lee showing their main lines in New York, the week's lack of established names created apprehension at a time when the Australian fashion industry is facing significant challenges and undergoing some dramatic changes.

Established brands such as Lisa Ho and Colette Dinnigan closed down last year, while the arrival of fast fashion giants like Zara and H&M and the local popularity of international e-commerce sites like Net-a-Porter have contributed to difficult domestic trading conditions for local labels. “It's been a wake-up call for designers being careful [about] who to partner with and who to back their business,” said Glynis Traill-Nash, fashion editor of The Australian. The recent launch of the Australian Fashion Chamber has been welcomed as a positive move. As a non-profit organisation headed up by Edwina McCann, editor-in-chief of Vogue Australia, it will operate much like the Council of Fashion Designers of America or British Fashion Council, aiming to provide designers with mentoring and financial support with the help of a board composed of industry insiders. “We're missing an independent body that can lobby the government on behalf of the industry,” said McCann. “It's important for our cultural identity that we have our own designers, much like the film industry.”

McCann looks to London as an inspiring benchmark for MBFWA and Australian designers are repeatedly encouraged to think more globally. “There was a time when Australian Fashion designers did fill the void [that] trend-based high street chains occupied. That day has gone. So our designers need to be absolutely unique,” added McCann.

The search for idiosyncratic designers was very much on this week. And if you made a careful edit of what to see, there were definitely positive take-aways. Everyone unanimously agreed that Toni Matičevski, one of the longest-standing labels showing at MBFWA, was a hit. Matičevski's last two shows have attracted resurgent interest as his carefully sculpted gowns and skirts took on a sharply modern touch with non-crease neoprene and sports mesh. Ginger and Smart has put more than a decade into the industry and the label's collection was an accomplished reflection of Sydney’s penchant for climate-attuned ease and saturated prints. Alice McCall celebrated her ten years in the industry with a change-up to her signature prints — she collaborated with collage artists Beth Hoeckel and Eugenia Loli and presented more mature shapes and demonstrated progress from her previous, girlier outings.

Australia's new establishment of designers are in the midst of flying the coop of Sydney, but many still retain an alternative presence here. Kym Ellery already showed her main collection in Paris, and so created an eveningwear collection for MBFWA, putting a new spin on red carpet dressing. Dramatic gowns, which were sculptural plays on light and shadow, were contrasted against the backdrop of Bondi Beach.

Arguably one of Australia’s most successful exports at the moment, Dion Lee — having just shown his main-line collection in New York and seen the opening of his first store in Sydney’s Strand Arcade — made his presence known with a show for his second line of twisted shirting, denim and clever basics. It set an impressive standard for how second lines should sit alongside main lines should designers be in position to expand. Anna Plunkett and Luke Sales, the creative duo behind Romance Was Born, also chose to shake things up, opting not to stage a full show and instead presenting a vibrant collaboration with artist Rebecca Baumann. As the Sydney Biennale, the country’s largest contemporary visual arts festival, is in full swing at the moment, it was a welcome surprise to escape into Sales and Plunkett’s nostalgia-tinted series of one-off gowns, basking in the reflected light of Baumann’s installation. 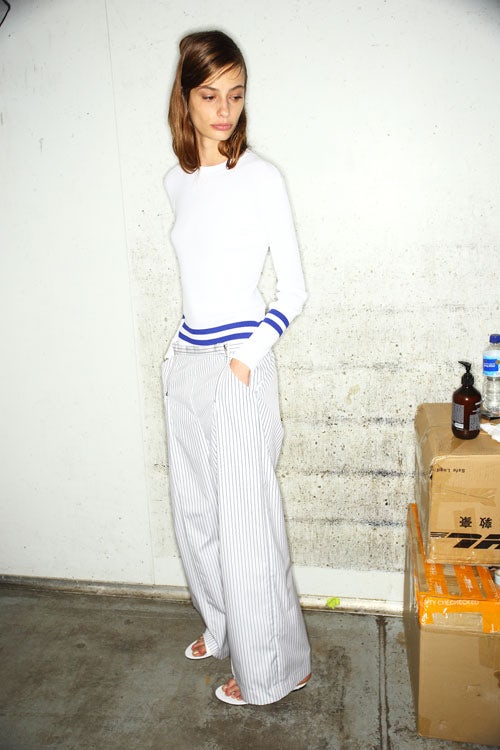 Newer names were also highlights of the week. Christopher Esber, a finalist in this year’s Woolmark Prize competition, put his prize money to good use with custom fabrics that demanded a closer look — hand-beaded rib knits and the cotton jacquard stripes woven onto organza stood out most. Karla Spetic took us poolside and revived the satin slipdress in her own language of sheer panels, oversized ruffles and pearl prints.  That felt fresh and focused. Emma Mulholland looked to the films of John Hughes and 1980s casualwear for a fun show entitled “Risqué Business.”  The youthful and humorous drive behind her work has already seen her grow internationally. And Haryono Setiadi showed promise with his use of colour in a series of origami organza dresses.

The official closing show of the week belonged to rising menswear label Song for a Mute, designed by Melvin Tanaya and Lyna Ty. Presented by Sydney's luxury menswear store Harrolds, the show had gravitas and clout, as pieces crafted in Australia out of specially developed paraffin-coated fabrics and virgin alpaca wools were paraded with conviction. Guest catwalk star Lupe Fiasco strutted with a swagger that worked well for the brand.

For crowd-pleasing Instagram moments, neoprene swimwear label N.L.P.’s raved-up dance performance was one to remember.  The swimwear crown though belonged to the print-centric label We Are Handsome, which had a yellow and white python snake draped around a model at their tropical-themed outdoor show. Sparking off the conversation about the representation of indigenous fashion (this week saw an official day dedicated to Australia's indigenous fashion designers), fashion collective Desert Designs was on the main schedule and staged a performance-cum-show dedicated to the indigenous artist Jimmy Pike. It was a show that felt rooted in Australia’s history and was much welcome. 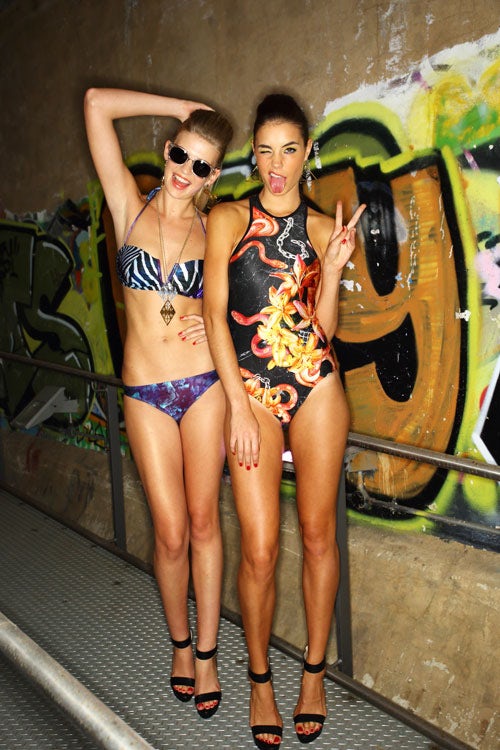 We Are Handsome | Photo: Sonny Vandevelde

The unofficial closer of MBFWA was staged off-schedule by Melbourne label Di$count. Designed by Nadia Napreychikov and Cami James, the label has nurtured a cult following through social media and their bolshy designs have been worn by the likes of Katy Perry and Miley Cyrus. They brought the house down with sequins and jewels, heavy with satire and cartoonish wit, and a refreshing disregard for Sydney's typical standards of wearability. They proved that an off-schedule show could still have impact. Indeed, the strength of Australia's breadth can also be seen in brands who opt not to show at MBFWA — nuanced street wear label Perks and Mini P.A.M., Aussie insider favourite Verner, and lace frock specialist Lover to name but a few.

Moving forward, it’s likely that the AFC will come together with IMG to work out how to refocus MBFWA. There are already rumours that the fashion week could move closer to June (last year, MBFWA was shifted from May to April) so that it sits in line with Paris and New York’s resort collections. This is likely to have an impact on international media presence, which was up this week as editors from Style.com, Elle (US) and Marie Claire (US) descended on Sydney, but would help designers to catch the attention of buyers and play to the Australian’s fashion strengths in producing cruise collections.

For certain international buyers, such as Justin Warner of Shopbop, MBFWA, in its current state, still feels like a must-see. “It’s actually nice to come here on the back of fall and see a fresher and lighter vibe,” said Warner. “We like the refreshing point of view in Australia. Our girl is fashion-savvy and really reacts to new product and Australia really delivers on that front.”

MBFWA, this year, may have felt like it was in flux, but the future will hopefully bring about positive change to Australia's fashion industry. Indeed, it would be a disservice to the talent here if that change failed to happen. “We need to look at London as a benchmark to where we need to get to,” said McCann. “Next year is twenty years of Australian Fashion Week and this year has been the first step towards brighter beginnings."