LONDON, United Kingdom — London Collections: Men will enter its third season this coming Sunday and it’s busier and buzzier than ever. There’s genuine, palpable excitement in London fashion circles about what we’re going to see, mostly because the majority of the menswear designers showing could still be classified as fledgling or early-stage companies and we don’t quite know what to expect.

One of LC:M's main showcases of menswear talent is the longstanding MAN initiative, a collaboration between Topman and Fashion East, whose past alumni include Christopher Shannon and J.W. Anderson. One of the three designers showing this time around is Alan Taylor. It says a lot about Taylor’s work that he's managed to attract my usually womenswear-leaning sensibilities. It began with one particular asymmetric Donegal tweed coat (above) from his Autumn/Winter 2013-14 “Fourth Dimension” collection with sharp cut-outs at the sleeves, which was enticing to both my other half, Steve, and myself.

The MAN panel, headed up by Lulu Kennedy, was similarly impressed. “The panel was very impressed with how well put together Alan’s work is, with everything from his fabrics to his concepts and styling there is a real chain of thought and attention to detail that makes him stand out,” said Kennedy. It’s a dream start for a London menswear designer, who almost could have gone in a different direction. 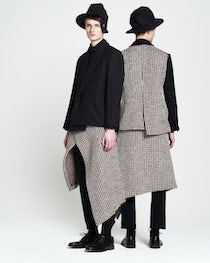 Hailing from Dublin, Ireland, Taylor didn’t grow up with fashion in his life, but soon discovered his calling during his art foundation year. After completing a BA in womenswear at the National College of Art and Design in Dublin, he followed his fellow Irish compatriot Simone Rocha to the bright lights of London and worked for her for three years. “She was two years ahead of me at college,” said Taylor. "We have the same kind of aesthetic and I really loved her work. I jumped at the opportunity, as I really wanted to be a part of what she did.”

Ultimately though, Taylor had eyes on his own label, and was constantly sketching ideas. “I was really driven to do my own collection,” said Taylor. “I was always scribbling down stuff all day, to develop a concept of a concise collection. I just thought it would be better to seize the day and make a go of it at the age of 24, rather than start it at 30.” He began with a small capsule collection and with the arrival of London Collections: Men’s debut season last year, Taylor felt confident enough that menswear was where he wanted to express himself, despite his background in womenswear. “I loved designing womenswear and I’d ideally like to do both in the future," he admitted. "It’s obviously more extravagant and there's a lot more to play with but with my designs — and it's a geeky thing — I really like details. I'm fascinated with the construction of pockets for example. For the new collection, I have this new way for fastening a jacket front. Those things make such a difference in menswear. They really separate the garments.”

Although Taylor has potential to go in either direction, what he is contributing to the London menswear scene is precisely what is setting him apart from his peers, with his take on directional tailoring. “Over the past few seasons, there's been a lot of streetwear vibes and maybe slightly tongue-in-cheek [styles] in London menswear,” said Taylor. “What I'm doing now is more refined and is rooted in old-school tailoring.”

Taylor's Autumn/Winter 2013-14 collection was inspired by the mathematical theory of the fourth dimension, which, in terms of actual garments meant tailoring with surreal extra sleeves and jacket fronts constructed out of netting, trousers layered under flattened shorts and jacket vents and disjointed tweed coats with cut-away sleeves. “It’s reinvention of classic menswear but without completely abandoning it at the same time," said Taylor.

The designer is also passionate about interesting fabric and textural contrasts and will continue to work with the Irish company Magee Tweeds for Spring/Summer 2014. He also plans to introduce fabrics like waxed cottons, with what will undoubtedly be intriguing results.

On top of what I hope will be a successful MAN debut, Taylor will also be participating in Selfridges’ "Bright Young Things" project in August, where young designers are given carte blanche to express themselves in their very own window space at the retailer's iconic Oxford Street store, a priceless opportunity for exposure.

But aware of previous MAN recipients who have stumbled as they attempted to grow their fledgling labels too quickly, Taylor plans to expand his stockists in a slow and steady manner. “I’m under no illusions that this is a business,” said Taylor. “My parents are very business minded and that side of things has always been drilled into me. I want my label to grow quite organically. I definitely don't want it to be that 'talk of the town,' hyped-up type of a designer.” This article, therefore, will hopefully not be seen as hype — merely a subtle tip-off to check out Taylor’s work when London Collections: Menswear kicks off this Sunday.