NEW YORK, United States — International editors in town for New York Fashion Week might bemoan the supposed sparseness of a show schedule that has endured the loss of Raf Simons’ Calvin Klein, yet it has been a week of debuts and happenings that suggest New York is growing its ability to welcome new fashion talent. With former bright young things such as Eckhaus Latta, Area and Vaquera now the core of the city’s alternative establishment, a new wave of fantastical designers emerged this week, seemingly going out of their way to be bold, brave — even extreme — in the face of harsh political and retail climates. 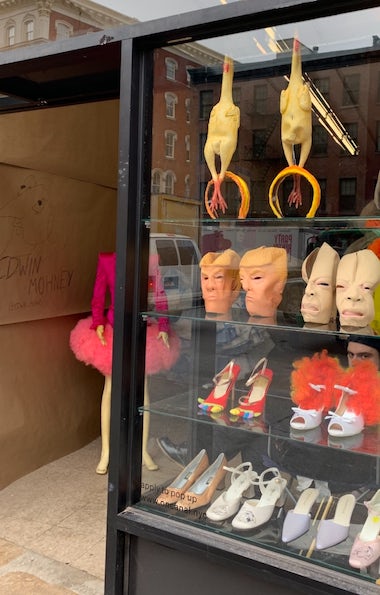 Walking past a nondescript section of Canal Street over the weekend, you might have spotted Edwin Mohney’s "Trumpetto" shoes, featuring Donald Trump rubber masks moulded over vertiginous heels, in the window of a temporary storefront. Mohney featured prominently in last year’s Central Saint Martins MA show, and after his UK visa ran out, he returned to his hometown of Buffalo, New York, and has been freelancing as a stage costume designer as well as planning his next steps as a fashion designer.

To keep up the momentum, Mohney rented a Canal Street storefront from Wallplay — an initiative to turn empty shop spaces in the heart of Soho into art exhibitions — and set up a temporary showcase of new work alongside his MA collection. Presented on discarded Kmart mannequins, the exhibition featured exaggerated dresses resembling rubber chickens and criss-cross latticed bodices with clown wigs as skirts, drawn from drag culture. “We’re in a time where there doesn’t have to be the delineation between costume and fashion. It’s all blurred together,” he said.

Elsewhere, emerging Tokyo-based costume designer Tomo Koizumi made the splashiest debut at the beginning of the week with metres and metres of organza stitched into ruffled body sculptures that were inspired by everything from the manga series Sailor Moon to Buddhist statues.

His first show will now forever be the stuff of fashion folklore, given that super-stylist and Love magazine editor-in-chief Katie Grand plucked him from relative obscurity via Instagram and offered to style his show, which came complete with superstar casting and the crack creative team of Guido Palau on hair and Pat McGrath on makeup, with all staged at Marc Jacobs’ Madison Avenue flagship.

A few days after the show, Koizumi was still reeling from the sudden influx of attention as well as figuring out his next steps. “I don’t think I want to do a proper ready-to-wear collection,” said Koizumi. “I think I want to do custom orders or limited editions for certain stores.” For Koizumi, the American dream as symbolised by his Statue of Liberty Marc Jacobs t-shirts, hybridised with the pastel confectionary ruffles, is very much alive, as is the power of the internet. “I will come back to New York. People have been very welcoming and I feel so lucky. With social media, everything is possible, so if you do something great and push yourself [into] the world, things can happen.”

For Caroline Hu, it was disillusionment with the corporate fashion system that drove her to launching her own brand. After being spotted from Parsons MFA show last year, Hu went on to work for Jason Wu and Tory Burch but quickly discovered it wasn’t for her. “I hated that everything always came down to budget,” said Hu. “With my own brand now, I want [to] take the time to work things out and use the next three or four collections to really build my identity. I don’t want to lose the essence of my work.” 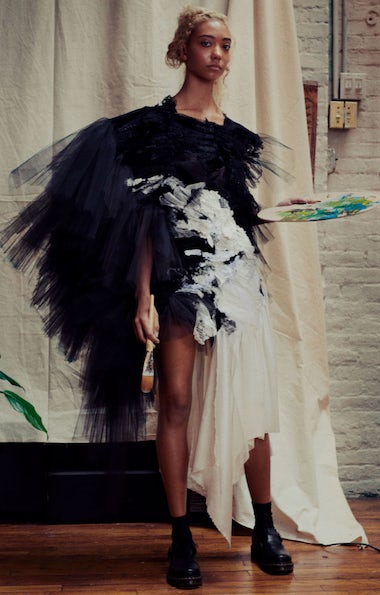 That essence is a beautiful one: Hu presented nine exquisite dresses in a stunning mise-en-scene that resembled Impressionist paintings, with Henri Matisse’s "Woman Reading" being the primary inspiration. Up close, the dresses mimic painted brushstrokes by collaging layers of different pieces of smocked fabric (often using discarded samples from her previous employers) with delicate appliqué on top.

Looking at the dresses hanging delicately on a rail, one could draw parallels with the way Rodarte’s Mulleavy sisters began their brand in 2005, when they towed a suitcase of dresses around New York and cold-called publications. It’s the sort of fairy tale beginning that, today, can easily be facilitated by Instagram DMs and WhatsApp, but Hu is keen that her work is appreciated in person. Citing Parsons MFA course director Shelley Fox, as an inspiration, Hu is keen to take it slow by only working with a handful of select retailers. “The Parsons course is only six years old and now you’re seeing the results of it. Shelley was so great at allowing me to follow my instinct and avoid being too commercial,” said Hu.

Avoiding commerce is precisely what Carly Mark and Ayla Argentina have opted to do. Mark, an artist who has participated in numerous group and solo shows, together with her studio assistant, Argentina, made a proper foray into fashion with their label Puppets and Puppets, which joins a burgeoning coterie of DIY labels like Gogo Graham and Lou Dallas that are collectively sticking two fingers up at the middling fashion mainstream.

“I became really fed up with the art world because it’s very limiting and exclusive,” said Mark. “The thing that’s great is that what we make gets out there and exists in the world on a body.”

With pieces like a trailing opera coat of patchwork Indian silks or a Medieval-inspired dress with elongated sleeves, Mark and Argentina’s world is rooted in Game of Thrones-inspired fantasy — one where they dictate their own rhythm of working. “If people want to buy our clothes, we will just baby-step our way through it,” said Mark. “Or not. Maybe we’ll show one collection a year. People are making up their own rules and that feels really liberating.”

Mark and Argentina are part of a generation who have grown up watching New York Fashion Week play out on Fashion TV in the tents. Now, they’re reacting to a pseudo-glamorous image that is fading away as the city’s fashion week continues to splinter into unexpected and more stimulating directions. “All of us, having grown up under overconsumption, [are] trying to combat that and keep progressing as artists, makers and creators,” said Argentina. “That’s why we’re all so excited for each other. It feels good not to feel like we have to get a leg up on each other, make more money than the other and be the loudest in the room.”