Buoyed by fresh talent, Shanghai’s fashion week is powering past regional rivals in Seoul and Tokyo, and ready to stand up to international scrutiny, reports Susanna Lau.

Buoyed by fresh talent, Shanghai’s fashion week is powering past regional rivals in Seoul and Tokyo, and ready to stand up to international scrutiny, reports Susanna Lau.

They were wearing the featured designers’ clothes (in their own distinctive ways) and buying Labelhood-branded T-shirts and stickers. There’s a sense that designer and customer — mostly millennials and even younger members of China’s Generation Zen — are growing up together. Both are looking to follow the new way of thinking in Chinese fashion, one that favours individuality among the sea of luxury megabrands and identikit trends.

Labelhood is their mothership, an enabler of democratic public participation for the young designer scene. Across the four-day programme, each show was staged twice — once for buyers and journalists, and again for the public.

“No matter whether you see it as a store or a festival, the core things we want to do is intensify the connection between the designer and customer,” said Justin Peng, chief executive of Labelhood. Liu, his wife Tasha Liu and Charles Wang founded Dong Liang, the multi-brand store that stages the fashion week showcase platform and has recently been renamed Labelhood Pillar to cement that branding. 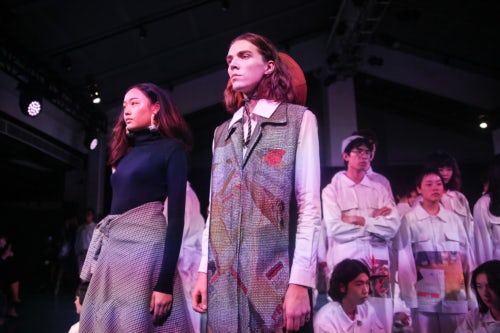 At Shanghai Fashion Week, from March 29th to April 1st, Labelhood formed a complementary hub for grassroots Chinese fashion alongside the Xintiandi venue, which plays host to more commercial shows. Shanghai Fashion Week’s vice general-secretary Lv Xiaolei, or “Madame Lu” as she is known, is happy to embrace Labelhood’s point of difference as a talent incubator.

“We both have the same aim of bolstering these young designers,” said Lu. “We hope that we can foster a young energy through Labelhood that is very different from what happens at Xintiandi.”

In addition to raw talent, what’s powering Shanghai Fashion Week over regional rivals Seoul and Tokyo is the network of trade shows. These sprang up in the last few years to accommodate the explosion of multi-brand stores in second and third tier cities serving an increasingly curious and savvy Chinese fashion customer. An estimated 3,000 buyers attend Shanghai’s Mode trade show, operating at various scales and ranging vastly in buying budgets. As a stop on the buying calendar for international buyers, Shanghai has grown in importance too.

“The fashion week here has developed a lot, especially the Labelhood shows,” said Michael Mok, general merchandising manager of Joyce (who has partnered up with Labelhood on a pop-up shop in Beijing). “Their collections are creative, original and less influenced by overseas designers. In addition, the fashion crowd in Shanghai are quite advanced, experimental and fun – very interesting to watch.”

Our products need to enter the life of ordinary people, not just fashion people.

The growth of Shanghai Fashion Week has paved the way for a strong group of designers from across China to debut their collections or to strengthen shows previously executed in the main fashion capitals. The market has become important enough to warrant a showroom presence and for most young designers, because of the relatively low cost, Labelhood is an obvious showcase choice. Owing to the number of designers returning from fashion schools abroad, the talent pool is deep; a committee picks from over 100 applicants to pick the designers who will show at Labelhood.

From the fledgling to the established, this curated arm of Shanghai Fashion Week is ready to stand up to international scrutiny as well as find favour at home with a sizeable and likeminded audience.

Not many BA students have the time or gumption to present shows in an official capacity at fashion week: Wanbing Huang, who is yet to graduate from BA womenswear at Central Saint Martins, is a self-confessed workaholic. 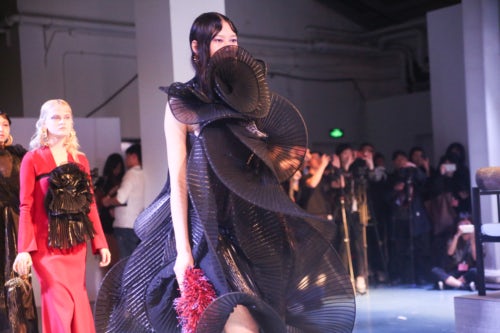 With a bare wooden branch on a Chinese bed as a backdrop and a live performance by hurdy-gurdy musician Yann Gourdon, Huang presented a deftly handled pleat-centric collection, rife with poetics, demonstrating a maturity far beyond her actual experience. “I have so many ideas that I want to express,” she said.

Shasha Wong only established her knitwear label Swaying last year after graduating from Royal College of Art. In her first catwalk show, Wong looked back to personal memories of knitting nets for the fishermen in her seaside town of Xiamen. The real technical triumph was the aerated kid mohair knitted into a multi-layered structure that formed foam-esque shawls and dresses. Setting up her label in Shanghai and showing here presents a certain amount of freedom for Wong. “This is a place that allows us to perform, to be known, to learn and to grow with it,” she said.

If there is one tactic borrowed from Seoul Fashion Week, it’s the tie-up with local celebrities.

Three chiselled boyish wannabe idols from a reality TV show sat at Motoguo’s presentation, wearing pastel-hued pieces by the whimsical Malaysian designer and were promptly besieged by ardent fans. Social media influencers could be seen talking to their followers through their personal broadcasts on apps such as Ingkee, commenting on looks and replying to viewers as the show was taking place. 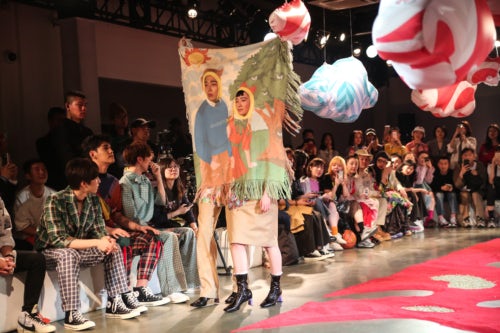 Angel Chen, one of Shanghai's biggest success stories and whose show was the most popular of the week, due to her designs being seen on the likes of Kris Wu and Fan Bingbing, further upped the buzz by featuring dancers from the popular show "Street Dance of China" in her vibrant Autumn/Winter 2018 collection. The show was subsequently featured on a popular shopping video stream that was seen by 89 million people. (Chen’s show along with minimal chic label Yirantian were tied up in a one day livestreaming partnership with Tmall.) Alongside the livestream, watchers were able to buy some products.

For both Justin and Tasha, Tmall is a gateway to growing their roster of brands.

“We want to do entry level product to let people know what the designer is about and to arouse attachment to the brand,” said Tasha. “Tmall is a dominant part of Chinese e-commerce and it is just beginning to enter into the luxury market and we want to create the new Chinese contemporary on the site," added Justin.

For designers looking for alternative show platforms, working with their tradeshow partners in Shanghai was one way of making their presence known.

Chen Peng chose to show his Autumn/Winter 2018 collection at the Ontimeshow tradeshow, having already shown in New York. The show was an opportunity to stage a homecoming of sorts, after his sculptural puffer jackets secured prestigious stockists such as Ssense and Dover Street Market in New York. Other brands such as Staff Only, who have been announced as GQ China’s latest protégé to show at the forthcoming London Fashion Week Men’s in June, worked with their tradeshow partner Tube showroom to stage a parkour-themed performance inside an EDM nightclub.

In a similar vein, designers who might have faced an uphill battle to gain traction in an increasingly crowded Paris and London fashion week schedules were able to come to Shanghai and add more depth and ambition to their collections. 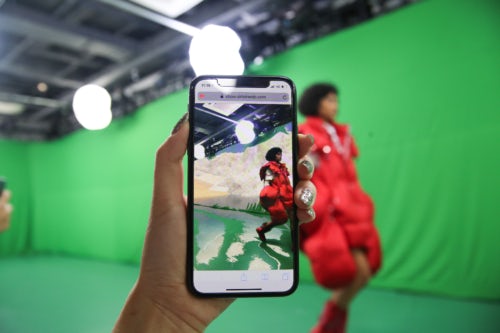 Xu Zhi had already staged a presentation in London, but in Shanghai, he fleshed out the context of his collection by placing his clothes next to inspirational photographs, a film and extra hand-painted pieces from his collection inspired by Dante Gabriel Rossetti’s muse Jane Morris.

Ximon Lee trialled the first iteration of his performance piece “Master of Mess” in collaboration with artist Pan Daijing during womenswear week in Paris. In Shanghai, Lee had the luxury of staging a longer version of this dance piece on a sandpit erected over a former Chinese Navy training swimming pool. Lee will be selling an entirely different commercial offering to the wrinkled and corpse-like textiles that shrouded the enigmatic dancers.

Likewise, Shanghai-based Sirloin, designed by Alve Lagercrantz and partner Mao Usami, that tags itself with a “stupid elegance” ethos, went beyond a simple lookbook presentation in Paris and set up a green screened augmented reality experience at Labelhood. By scanning a QR code on WeChat, the audience could use their smartphones to view a digital backdrop alongside the models. The video game aesthetics were perfect for Sirloin's branded underwear and trompe l’oeil printed denim, accompanied by a soundtrack of fake YouTube ads.

Meet the Real One

The tagline of this season’s Labelhood was “Meet the Real One.” Perhaps it was the intimacy in scale but what came across in many of the presentations and salon shows was a heartfelt authenticity. Distinct design voices appeared to be reflections of designers’ upbringing and cultural experiences. 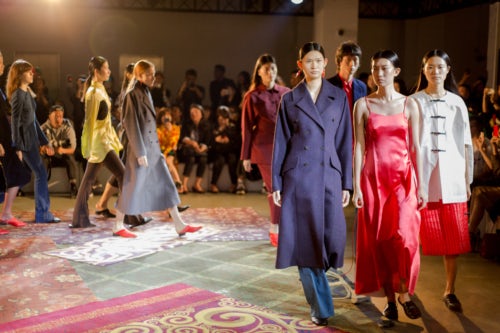 “Five years ago, Chinese designers wanted to be labelled as international designers but increasingly they are much more embracing of their own culture – and finding out what can they offer that is different,” said Tasha Liu.

Samuel Gui Yang, a graduate from Central Saint Martins MA, has presented collections in London, Milan and Los Angeles. But Labelhood has been his most consistent platform, and his Autumn/Winter 2018 show marked his fourth Shanghai presentation. Wong Kar Wai and Ang Lee films are oft-used references, but for Yang, they take on a more subtle presence in the form of distilled mandarin collars, Mao-esque suits in English suiting fabrics and discreet qipaos that open up into apron dresses. There was an ease and a beautiful sense of restraint to the way Yang utilised elements of Chinese traditional dress that mark him as part of a generation of Chinese designers no longer shying away from their culture.

Without a doubt, one of the highlights of the week was Shushu/Tong, the final show in Labelhood’s schedule. Having never shown elsewhere, opting to concentrate on showrooms in Paris and sales, Liushu Lei and Yutong Jiang, who met while studying at LCF in London, are Shanghai’s fashion darlings. Their brand of specific girliness, doused with bows, ruffles and a touch of toughness has garnered stockists such as Lane Crawford, Dover Street Market and Browns. 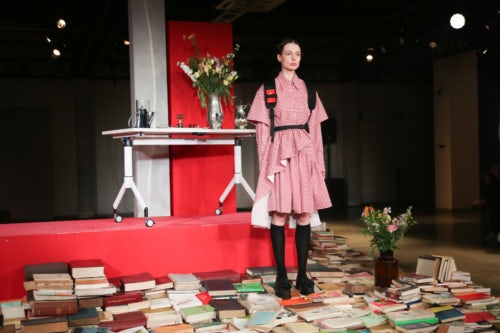 “We could not have imagined Shanghai Fashion Week growing to what it is now five years ago. We couldn’t have imagined so many designers coming through,” said Madame Lu. “Change is so fast in China, so sometimes it’s impossible to plan for.” For Labelhood, they have their eyes on something bigger than fashion week. "Our products need to enter the life of ordinary people, not just fashion people," said Tasha. "We could take the fashion festival and stage it in different cities in China at different times outside of fashion week," added Justin. "We are a portal for discovering China's new fashion."

Disclosure: Susanna Lau travelled to Shanghai as a guest of Shanghai Fashion Week.