The Business of Being The Blonde Salad

Next up in our series on influential bloggers and the businesses they have built, BoF speaks to Chiara Ferragni of The Blonde Salad, as she prepares to launch a collaboration with mobile marketplace app Depop.

MILAN, Italy — Don’t let her lighthearted handle and playful, easygoing tone deceive you. Over the course of four years, Italian fashion blogger Chiara Ferragni of The Blonde Salad — named after her mixed bowl of interests, which include fashion and travel — has grown her blog from a personal passion project featuring daily outfit posts to a incipient media company, called TBS Crew, comprising both her website and a creative consultancy.

“I was already very obsessed with taking photos and I started following some American fashion blogs during summer 2009,” recalled Ferragni, with an Italian lilt. With beachy (yes, blonde) waves, a doe-eyed gaze and a playful wardrobe seemingly made to be photographed, her good looks swiftly attracted attention on early photo-sharing platforms like Flickr and Lookbook.nu. “Then I started to realise that having my own personal space would be something more powerful than publishing photos on other social media platforms,” she said.

Launched in October 2009, while Ferragni was studying law at Bocconi University in Milan, The Blonde Salad now receives 600,000 unique visitors and 6 million pageviews each month. Meanwhile, Ferragni has attracted a significant audience on platforms like Instagram (where she has 1.9 million followers and her images regularly receive upwards of 30,000 ‘Likes’) and Facebook (600,000 ‘Likes’), leading to a host of collaborations with top-tier luxury brands like Louis Vuitton, which have helped to cement her status as a bona fide fashion influencer. 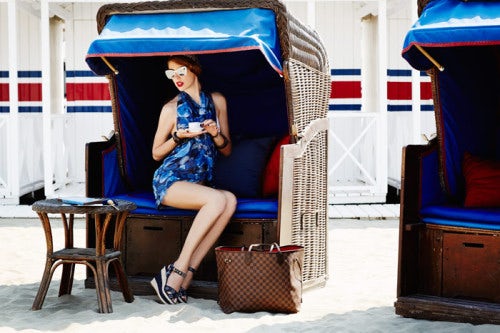 “In Europe, in Italy, nobody was doing it at the time, so I just [went] for it and it was probably the perfect timing because, internationally, journalists were starting to talk about the fashion blogger phenomenon and who they were, why they were being invited to shows, why they were collaborating with brands, and so there was huge attention [focused on me and my blog] too,” remembered Ferragni.

At the same time, Ferragni’s glamorous but accessible “high-low” ensembles struck a chord with a wide spectrum of women: “It was something where people would feel they could [achieve] the same kind of look, because they weren’t too crazy, but at the same time keeping that sense of inspiration for new outfits, combos, mixing and matching.”

Today, Ferragni unveils her latest project: a curated store on Depop, a mobile marketplace founded by Simon Beckerman and backed by investors including Balderton Capital, Holtzbrinck Ventures and Red Circle Investments. “My followers have always been asking for years, ‘Why don’t you sell some of the things you don’t wear anymore?’ I do everything from my phone and I loved the idea. Depop is so easy – you take a photo of something you want to sell and it can be online in 30 seconds and basically minutes later it can be sold,” she explained.

Beckerman and Ferragni first met through Riccardo Pozzoli, Ferragni’s ex-boyfriend, business partner and chief executive of TBS Crew, who also serves on Depop’s advisory board. “I knew almost immediately this would be a good fit. Both Chiara and Riccardo are very smart and have a contemporary, fresh approach to life. When we first met, he immediately came to us with ideas that it had taken us a year to formulate,” said Beckerman.

It’s the latest in a series of commercial collaborations spearheaded by Pozzoli, who began working with Ferragni when she first conceived of The Blonde Salad. “I was always working with my ex-boyfriend, my business partner — we are like brother and sister,” said Ferragni, who still affectionately calls him ‘Richi.’ “He was giving me the best advice about it. We have always been very selective and we never decided to do too much because we were really trying to see the future, instead of trying to do everything in that moment and then being gone.”

Pozzoli’s advice was well-timed for Ferragni, who, just four months after formally launching her blog, began to receive a deluge of invitations from international fashion brands to attend their runway shows, as well as offers to appear on television in her native Italy. Since then, the duo have devised a strategy that has seen Ferragni star in campaigns for Guess and Mango, co-design products for Tiffany & Co and Superga, and make guest appearances for Louis Vuitton, activities which often find their way onto her blog. Today, the TBS Crew, now comprising Ferragni and ten of her “closest friends,” command fees ranging from €10,000 to €50,000 (about $13,500 to $68,000) and more.

“Special projects” — which can also include “consulting for brands on social media” — comprise about 60 percent of TBS Crew’s overall revenue. Affiliate commissions collected when readers click over to retail partners via product links appearing on The Blonde Salad drive another 20 percent, while Ferragni’s modeling activities bring in the remaining 20 percent. These are typically arranged through Next Models, which represents Ferragni in the US.

Indeed, a focus on the American market is now at the top of Ferragni’s agenda. She is already house hunting in Los Angeles. “Americans are just so much easier to work with — they understand the power of numbers and the power of social media interactions and all these kinds of things much better than anybody else,” she said.

The TBS Crew is also set to debut a complete re-design of The Blonde Salad website, which will have a much sleeker interface and be updated two to three times a day by two staff contributors. As editor-in-chief, Ferragni hopes to pen a regular column, while overseeing the addition of new content, including shopping pages — all while finishing her law degree, which she aims to complete at year’s end.

“We have such a strong image. It’s still powerful and it still gets so many views and people buy from my links, but at the same time we can be 10 times more powerful and we want to do so much more,” she enthused. “It’s going to be more like a website, the layout and everything is going to be completely different.”