Dan Bailey and Joe Kazuaki of Tokyo Dandy tell BoF about connecting Tokyo’s fashion and club scenes, and being a ‘welcoming committee’ for international brands.

Dan Bailey and Joe Kazuaki of Tokyo Dandy tell BoF about connecting Tokyo’s fashion and club scenes, and being a ‘welcoming committee’ for international brands.

TOKYO, Japan — When Miu Miu began planning a grand party to celebrate the launch of its new flagship in the Aoyama district of the Japanese capital, the brand called up Tokyo Dandy. “Miu Miu knew exactly what they wanted, but they also wanted the opinion of someone on the ground,” said Dan Bailey, one half of Tokyo Dandy, a duo who have become a fixture on the local fashion scene. “They consulted us on everything from the music and timing to the location of the event. We compiled the guest list, inviting all kinds of people that overseas PRs can’t reach. These are the cool club kids that are the fabric of Tokyo street style and culture,” continued Bailey, referring to 'it girls' like Mademoiselle Yulia, Elli Rose, Crystal Kay, Sara-Mary and Kozue Akimoto, who attended the glittery event alongside Stacy Martin, Mia Goth, Rinko Kikuchi, Mark Ronson, Caroline Issa, Stephen Jones and Miuccia Prada herself, who flew in for the party.

Founded in 2008, Tokyo Dandy is the brainchild of Bailey, originally from York in Northern England, and Joe Kazuaki, who was born in Okinawa, a small island off the southern tip of Japan. The two became friends after meeting at the Womb nightclub in Shibuya, a major nightlife district in Tokyo, soon after Bailey had moved to the city to teach English. At the time, Kazuaki was working in a small record shop, having recently graduated from a course in pattern design. “There was so much great stuff happening here. There was La Fabrique and ‘Teenage Kicks’ parties at the Chelsea Hotel. Le Baron had just opened. There was music like mash-ups, electro-clash, rock and cheesy pop music that people wanted to go out and dance to,” said Bailey of Tokyo’s buzzy underground club scene. “Meanwhile, there were high fashion parties with a completely different set of people and music. We had friends everywhere, so we were struggling with these two very different worlds.” 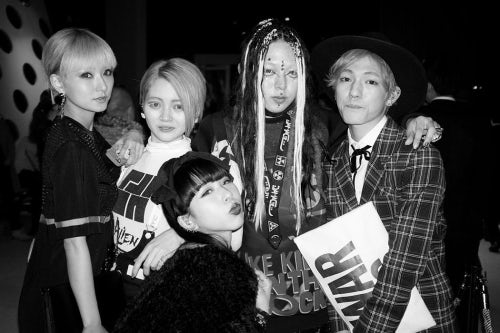 Sensing a disconnect — and an opportunity — Bailey and Kazuaki launched Tokyo Dandy, a bilingual web magazine, in Japanese and English, with the aim of bridging Tokyo’s fashion and clubbing scenes, which were much less integrated than is typical in Western capitals. Critically, the duo began publishing a timely stream of voyeuristic photos taken at parties and underground club nights, which grew to become one of the most popular features of the site. “There were all these big events happening in Japan, yet there were very few photographers. Japanese magazines wouldn’t publish party photos until a month later in a very small corner of their publication,” said Bailey. “I started taking pictures and uploading them online the very next day. Suddenly, it just became my job to take photos and people started inviting us to their parties.”

“It wasn’t just fashion either,” added Kazuaki. Indeed, Tokyo Dandy also covered the local art, music and photography scenes. “For us, it mattered that a lot of young Japanese people, whether they were designers, artists or musicians, were out there and really doing things,” explained Bailey. “If someone made it into The New York Times or another publication overseas, we’d share that on our website. We were always respectful of other people and supportive of what they do and we just wanted to say, ‘Look, this is what [Japanese] people are doing and it’s great!’”

Tokyo Dandy’s first coverage of a major party was published during the summer of 2008. Hedi Slimane was in Tokyo and DJing at SuperDeluxe in the Roppongi neighbourhood. “Famed for his slim-fitting cuts, the designer could not have found a more fitting crowd than the androgynous Tokyo pack,” wrote Bailey on Tokyo Dandy. “His music selection was pure Hedi. Buzzing ‘80s and The Libertines were played, while monochrome shots of Courtney Love, Kate Moss and Pete Doherty were beamed onto the club walls. A lucky few were taken backstage to be photographed by Hedi for Dazed & Confused, before he returned to the decks at 2am.” 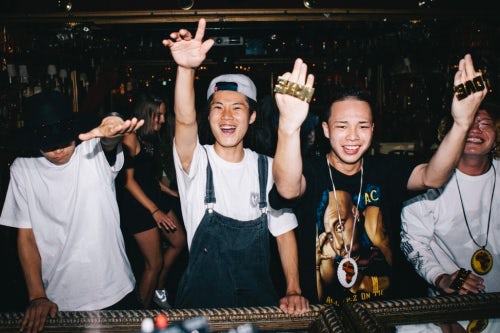 Over time, Bailey and Kazuaki cemented their reputation, not only as the duo behind the go-to bilingual blog on fashion, art and culture in Japan, but by expanding their activities beyond their website. The duo have since worked on projects with numerous international fashion brands, including Marc Jacobs, Prada, Gucci, Dior, Louis Vuitton, Loewe, Alexander Wang, Jeremy Scott, Acne Studios and Versus Versace, among others. “We’re like the on-the-ground welcoming committee,” grinned Bailey. “We became friends with Sky Ferreira when she was on a shoot for Elle magazine. I think that with us being bilingual and having been around for so long, it made sense for us to show her around Tokyo.”

Today, the Tokyo Dandy website receives over 400,000 page views from about 120,000 unique viewers a month, 78 percent of whom are based in Japan. But the site itself makes little money. According to Bailey and Kazuaki, 30 percent of their overall revenues come from consulting for brands on the intricacies of the Japanese market; another 30 percent comes from events (including photography, curating guest lists, organising musical acts or DJing themselves). They also throw their own club nights under the Tokyo Dandy umbrella, which generate about 20 percent of their total income. The remaining 20 percent comes from miscellaneous jobs, like working on one-off projects for magazines like Vogue Japan, Numéro Tokyo and Nylon Japan.

“We certainly weren’t trying to make money,” said Bailey, looking back. “You can’t do it for the sake of making money.” But on their current foundations, the duo behind Tokyo Dandy are aiming to build a bona fide business they can grow. “There’s still a huge distance between overseas brands and the local community, in terms of understanding each other,” said Bailey. “We want to be able to charge big companies money for introducing them to Japan."

“Fashion is the de facto meeting point of different cultures. It’s where the synergy comes. By working in fashion, we’ve been able to meet people from music, art, dance and a diversity of cultures,” he added. “The other day, Kanye West said something like rappers are the new rock stars. But the truth is, fashion is where it’s at. Everyone wants to be sitting on the front row, not dancing in some music video. Now, we need to build a real business model around that, rather than just doing it for fun.”