Leaning into its conviction that constant change is the new normal in fashion, Carolina Herrera encourages all employees to be nimble in their operations — granting them the creative autonomy to succeed.

Leaning into its conviction that constant change is the new normal in fashion, Carolina Herrera encourages all employees to be nimble in their operations — granting them the creative autonomy to succeed.

NEW YORK, United States — Following the epoch-defining evolution of the brand’s eponymous founder’s role — who became brand ambassador in 2017 — two years into its new chapter, the Carolina Herrera business is steadily increasing in momentum. Under the leadership of president Emilie Rubinfeld, New York designer Wes Gordon joined the brand in 2017 as creative director — tasked with reimagining the brand’s polished take on redefining the brand’s vision for today.

“A Carolina Herrera dress represents joy, happiness and laughter — and the people making it have to feel that way too,” says Wes Gordon, creative director of Carolina Herrera. “Happy people make happy clothes. Mrs. Herrera took so much pride in the team and culture she created. It’s the most civilised office I’ve ever experienced. Everyone sits together for lunch and it’s a true joy to work here.”

Now, charged with expanding, evolving and refining the commercial framework that will ultimately empower Gordon’s creative inspiration and crucially connect it to consumers, Rubinfeld is looking to the people behind the strategy and embarking on an ambitious employee development and empowerment programme. 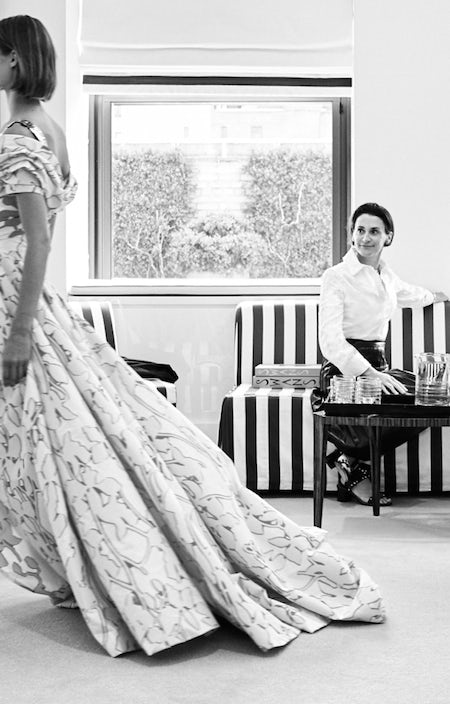 To hear why transparent communication, insightful development programmes and nuanced career paths are fundamental to the company’s future success, and why the happiness of her employees is paramount in her company’s culture, BoF sits down with Emilie Rubinfeld.

How would you describe the company culture at Carolina Herrera?

When we talk about Carolina Herrera herself, there’s one element that she imparted and instilled — that there should be a sense of fun. She always really implored us to keep fashion in perspective, so I say to the team, “How lucky are we? We get that we work in fashion, we work in the heart of New York’s garment district, the American fashion capital, and that we’ve all made careers in the business of making beautiful clothes. Really, how lucky are we?”

You really feel it when you prepare for a fashion show. To execute a show, every individual in this organisation plays a role — they have to work in sync and harmony, and it’s truly the ultimate statement of team work. When you’re watching a show, for me, you really see the passion and the talent of the team. It’s palpable.

How do you ensure that the culture connects with Millennial and Gen Z employees?

Transparency. We have employees that have worked with Carolina Herrera for over 20 years to employees that joined 6 months ago out of college, and it is imperative every employee here has a sense of purpose — a sense of ownership in the mission and the work. We are very clear and transparent around goals. What is the goal of each department and how does the goal of each department and every individual in that department contribute to the greater purpose of our business and our brand? Through transparency, every team member should really feel that sense of ownership and being a part of a collaborative team.

Through transparency, every team member should feel that sense of ownership and being a part of a collaborative team.

From the very beginning of this transition with the new creative director, it was key that we had open conversations — that we shared what was actually happening and that everyone on the team had a role in executing it. Transparency is key.

How do you develop your teams?

When we do have those conversations about development with the team, we talk about agility and curiosity as the two core competencies to develop their career. That has to come from the top — how Wes approaches his work, how I approach my work, and how we communicate that to all the communities here at Carolina Herrera.

Because we’re transitioning with the new creative director, there is opportunity to innovate, to try new ideas, to do something that has never been done before. Working so closely with Wes, he’s a creative director that’s looking at all brand touch points and how to develop them and how to infuse his creative direction. He’s now engaging with people on the team to try new things and bring new ideas to the organisation, particularly on the digital front, and that has really been a motivator for the next generation of team members at the organisation — and we hope it has longevity with some of the other members of the team.

Our business requires an extreme nimbleness and change is the new normal. So, what we did six months ago has to be done in a new way today — and tomorrow. Even talking about what’s exciting for a new generation of fashion executives who are making the choice to build their career in fashion, it’s that idea of nimbleness that makes the change and new ideas that are going to work.

You have to have a passion for curiosity. Wes says all the time that you can really make your mark in the organisation by paving the way for a new strategy, an initiative — own it and bring it to fruition because we build from the past but evolve for the future.

How much impact does the company culture have on the business’ performance?

We really feel that we’re part of this amazing opportunity to take Carolina Herrera, almost a four-decade young brand, to reach its full potential. Everyone is really motivated by that idea and it’s unique to be a part of that. So, when you talk to the employees, and you ask them, “Why are you here? What motivates you?” To make this brand reach its full potential, after experiencing such an incredible transition, it’s exciting to be a part of that.

Our business requires an extreme nimbleness and change is the new normal.

The other part to consider about Carolina Herrera is that we have a parent company. Being part of Puig, with owned brands like Nina Ricci, Paco Rabanne, Jean Paul Gaultier, and now Dries Van Noten, we have the opportunity to leverage knowledge, resources and best practices at a group level. With Puig, we have a network in every corner of the globe with partners in fragrance who value Carolina Herrera fashion to strengthen the total brand and want to reinforce the business as one. We really encourage team members to cross pollinate and integrate strategy with their international colleagues — this approach has been really valuable as an opportunity to broaden the scope of our team members.

What talent needs do you currently have?

We are really focused on building an empowered pipeline to sustain our atelier — but also to adapt our structure and talent skill set to align to the digital reality of our business. We have three employee communities: a corporate community, a retail community and an atelier community. The development approach and communication strategy for each of those communities is quite unique. In the atelier, which is really the heart of our brand and business, and quite special for a New York fashion brand, it’s a community that I’m incredibly proud of and in company messaging, we talk about it a lot.

Thinking about the challenges that we have to lean into, and accepting that constant change is the new normal in our business. Even seeing how our new creative director works as a digital native changes how everyone in the organisation works. It’s how our marketplace is changing so rapidly. However, the extreme nimbleness that is required in our organisation is an opportunity.

Those two points I mentioned about curiosity and agility — it’s amazing how, if those two competencies are very strong in an individual, they have such opportunities to grow and grow fast in this organisation. We have to change direction all the time and it’s one of the many exciting and gratifying aspects of being in fashion. You never know what the day has in store. There is a demand for reinventing every day for our consumers, the market — we want to see newness in how we deliver on that.