How I Became... Music Director for Louis Vuitton Menswear

“We’re redefining the rules as we speak,” says Benji B — the man Virgil Abloh has tasked with the sonic accompaniment of his new vision at Louis Vuitton. 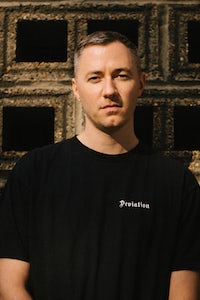 How I Became... Music Director for Louis Vuitton Menswear

“We’re redefining the rules as we speak,” says Benji B — the man Virgil Abloh has tasked with the sonic accompaniment of his new vision at Louis Vuitton.

LONDON, United Kingdom — In addition to running his own BBC Radio 1 show and producing Kanye West’s album “Life of Pablo” and soundtracks for David Attenborough shows including Blue Planet 2, over the years musical prodigy Benji B has frequently collaborated with leading creative directors in fashion. Having produced soundtracks for Phoebe Philo at Céline to Yiqing Yin at Poiret, the DJ was most recently named music director for Louis Vuitton’s men's by Virgil Abloh — a long term friend.

After juggling his senior school studies with producing DJ Gilles Peterson’s show for London’s Kiss FM, a popular mainstream radio station, Benjamin Benstead travelled straight from his last exam at college to his first day of work at production company Something Else. Four years later, Benstead, known as Benji B, went to work for the BBC as a Radio 1Xtra DJ, leading to his current slot on a Wednesday night on Radio 1.

BoF sits down with the musical prodigy to hear why having a guide for the sound and sonic feel is important, especially to creatives like Abloh who take music as seriously as they do any other art form.

How did your career as a DJ begin?

These days, everyone is a DJ, but when I was at school, DJing was an unusual thing. It wasn’t something you could say with a straight face to a career advisor at your sixth form college. Most people [at school] went to do work experience at a florist or an insurance company — I worked at an independent record label in London Bridge.

It was about speaking the language every day. It’s not as simple as the phrase, “It’s not what you know but who you know.” It was about having the opportunity to be in and among the DJs that I respected, learning about what goes on in a record label and in a radio studio, which is my biggest passion.

The most important break for me was working at Kiss FM aged 16. I approached [former Kiss FM] DJ Gilles Peterson and famously said to him, “I really like what you do on the radio, but I can help make it better,” which is the kind of thing you’d only do aged 16. We developed a pretty amazing relationship and I was producing his show while still at school.

A huge part of vocational jobs is understanding that you have to get on with it and put the work in.

What made you stand out as a junior?

I have never had a problem with [my] work ethic. A huge part of vocational jobs is understanding that you have to get on with it and put the work in. It became clear to me very quickly that the career I wished for was vocational, which could not be legitimised by a degree or a qualification, so I never went to university. Being in the field, having the experience and applying yourself — that was the qualification.

When I was 18, on the day of my last exam when everyone else burnt their books and got pissed at the pub, I got on the tube and went to my first day of work — and I’ve been working every day since.

Conformity is not the root to success. Most people, even more so now in the Instagram follower era, are more interested in conformity and subscribing to a particular channel of musical style than seeing the importance of having your own opinion.

I’m not confident in my personal life but I’m absolutely confident in what I like in music, what I respect in music and what is good. You shouldn’t be afraid to have an opinion if you are living and breathing something every day. I had this knowledge of the music out on the street and that level of authority was respected by the people around me.

How did your career cross over into the fashion industry?

I’ve always found pleasure in translating people’s vision, so it stands to reason that that would naturally end up being connected to clothes and style. Sneaker culture and the extended worldwide family of that scene, especially skate culture, always had a direct connection with everything we did, like Stüssy and Supreme back in the day. We used to congregate at Bond International in Soho so that’s naturally matured into other things and I DJed the openings of those stores or helped them out with the music.

In terms of music for runway, it started with Savile Row. I did a bit of work with Ozwald [Boateng] back in the day, Gieves and Hawkes and Jason Basmajian. I then got a call from Phoebe Philo [at Céline]. That creativity, both in terms of the clothes themselves but also the show, was an inspiring thing to be a part of.

How does your work differ for your collaborations in fashion?

If I’m doing a DJ set, you’re going to hear what I wish to express, but if I’m trying to translate someone else’s vision, it doesn’t have to fall into the remit of what I would naturally play or like. I’m going to translate it into what is right for the job. It’s also my job to curate and bring what I think is relevant for that particular season, or challenge people and expose them to other things.

It’s about understanding context and how to create moments by adding to the emotion and atmosphere. In the fashion world, there are such amazing creations going on [but] often not such amazing music and I’d like to bring more amazing music into that field. It is unchartered territory.

My collaboration with Virgil is the natural conclusion of a 10-year plus relationship with him, sharing ideas and tracks.

What does the role of a music director mean to you?

Having a guide for the sound and feel sonically is important, especially when you work with creatives who take music as seriously as they do any other form of art [and] it’s not just a convenient soundtrack. I deal directly with the creatives, I avoid all the other noise and I try to translate their vision into a music centre.

The dynamics of 9 or 12 minutes of runway music is not the same as 9 or 12 minutes of music in any other context. When the production director says, “Ok, we’ve cut [the show] to 42 looks instead of 46 and the girls are going to be walking in ten seconds instead of 12 seconds,” that’s now a language I understand — the science of exactly how many minutes we’re going to lose depending on how many looks they cut or how fast the boys or girls are walking.

How did your role as music director at Louis Vuitton Men’s come about?

My collaboration with Virgil is the natural conclusion of a 10-year plus relationship with him, sharing ideas and tracks. It’s an absolute joy to work with someone as progressive and inclusive as he is, who already has such an encyclopaedic, passionate knowledge of music.

It’s not jobs for your mates, it’s the experience of working with a company like LVMH and the client itself. It’s not a joke. You have to understand the language and you have to have the experience in order to do that. We’re redefining the rules as we speak. DJing at events to do with fashion, that’s like the basic 101 level. In terms of creating music for fashion shows, it’s not an industry that necessarily exists. There’s no rule to it.

Inclusion is the most exciting element of what’s happening in the fashion world right now. For the first time ever, people on the margins before now feel part of the conversation. I don’t just mean that in terms of diversity, which is three decades late but very welcome none the less. I’m also talking about youth, class, the fact that a fashion show is almost an outside broadcast. This closed court of exclusivity has now been smashed wide open.

What advice would you give a junior starting out today?

Studying your craft, with the privilege of being able to make mistakes, is more important than immediate recognition

There’s an incredible pressure for young people now as major corporations try to narrow the bottle neck as much as possible so that we’re all listening to the same artists on the same streaming platform and wearing the same sneakers. The most valuable thing that you have is your thumbprint, which is to say that no one is the same. Everyone’s cultural experience and musical perspective is unique to them, and it’s important to express your own thumbprint. And the rule of thumb is still the same — if you don’t hear the record you want to hear, make it. If you don’t have a club night you want to go to, create it. That’s what I did.