SHANGHAI, China — After fifteen weeks of protests the luxury industry has resigned itself to a poor performance in Hong Kong. Analysts are debating just how bad it will be this year, but some are now advising clients to plan for the worst.

According to estimates from investment bank Cowen & Co., if protests continue through to December, a decline of 10 percent to 60 percent in Hong Kong sales could translate into a 1 percent to 4 percent earnings-per-share hit for a firm such as Tiffany, which generates 20 percent of its Asia-Pacific sales in Hong Kong, where it has 10 stores.

Tiffany Chief Executive Alessandro Bogliolo was candid about his concerns earlier this year.

“We must acknowledge that the current situation is taking a toll on our business. In fact, we estimate that during the second quarter we lost nearly six full selling days due to unplanned store closures,” Bogliolo said on a conference call following the second-quarter earnings announcement which saw net sales in the Asia-Pacific region fall by 1 percent.

We must acknowledge that the current situation is taking a toll on our business.

The bright spot on the horizon for Tiffany and other luxury players being hit in Hong Kong, however, is that there is room for them to grow in mainland China, where luxury spending continues to be repatriated.

Bernstein analyst Luca Solca, for one, says there is “definitely” enough growth left for Tiffany in mainland China to offset losses in Hong Kong, which he figures so far to be less dramatic than some estimates.

“Sales were down 50 percent in August, less so in July, and possibly 10 percent in June. It depends how the year will proceed, but so far the year-to-date decline is single digits,” he explained.

Investing More in the Mainland

In any case, this week’s launch of Tiffany & Co.’s Vision and Virtuosity exhibition at Shanghai’s Fosun Foundation comes at a critical time for the jeweller to entice more Chinese consumers to spend at home. The brand’s largest-ever exhibition explores 180 years of house codes and history in an interactive and digitally sharable way. 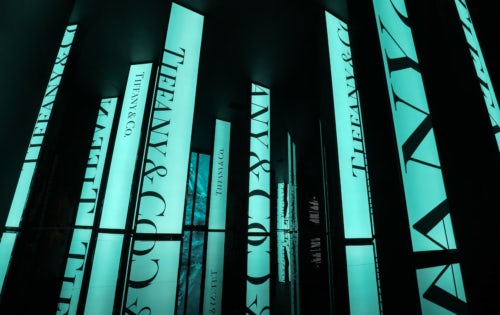 “A lot of the set-up is very Instagram-able, though there is no Instagram in China, so let’s say WeChat-able,” Bogliolo joked prior to the exhibition opening.

The aim of the exhibit, which was more than a year in the making, seems to be as much about educating Chinese mainland consumers about the breadth and depth of Tiffany’s heritage, as it is about creating a “da ka” moment (the slang term refers to a “must do” activity, especially one to be posted online).

According to Bogliolo, although Chinese consumers are exceptionally well-researched when it comes to brands and products, there is a tendency for them to pigeon-hole brands in terms of the one thing they do best. For Chanel, he says, it’s the matelassé bag, while for Tiffany, it’s the diamond setting.

“A brand like ours with almost 200 years [of history], there are so many cultural references that are relevant and can be shared, so this is what we want to achieve to make people understand. We need to be more vocal about what the brand is,” he added.

There are many luxury brands facing headwinds in China, due to broader issues such as the ongoing trade war between China and the US, as well as continued unrest in Hong Kong.

Tiffany, however, as America’s largest luxury brand, seems particularly exposed. Though to date there has not been a noticeable turn among nationalist Chinese consumers against the brand for its inherent “American-ness,” there has been a drop in Chinese shoppers to the US.

“So far, the consumer base that would consider Tiffany still continue to do so,” Benjamin Cavender, China Market Research Consulting's senior researcher, explained. 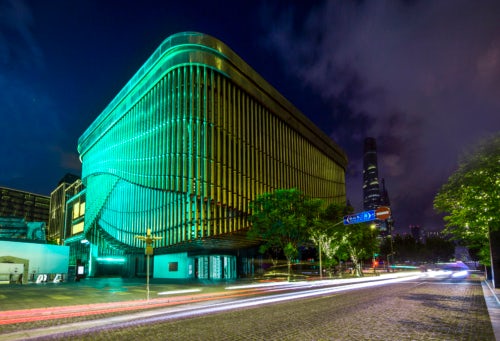 “Some US brands, like Apple, have seen a negative shift in consumer attitudes but this has more to do with lack of product-market fit and because there is a strong Chinese champion in Huawei that consumers feel has been targeted by the US government.”

However, as a company that manufactures its products in the US and Europe, Tiffany’s tariff trouble is the inverse of many fashion brands that manufacture in China. The trade war means they need to pay more to get their products into mainland China, where higher tariffs on imported American-made jewellery kicked in this year in retaliation for tariffs imposed by the US government on Chinese-made products. It’s an extra cost the jeweller has decided to absorb for the foreseeable future, rather than pass on to consumers in China.

“It's a challenge in the sense that it has affected the profit margin, but I think what is important is to grow a market for the long term, which means [looking] longer than any trade war or higher duties,” Bogliolo said.

Unlike many luxury brands, Tiffany & Co. enjoyed a strong 2018, reaching net sales of $4.4 billion (a company record) driven in part by its robust presence in Asia-Pacific (including China) where total net sales increased 13 percent to $1.2 billion.

In June, Tiffany cited “dramatically” lower tourist spending for the first quarter, after the firm reduced its full-year profit outlook and noted that an overall sales drop of tourists visiting the US steepened to 25 percent that quarter from a year earlier. The decline was even deeper among travellers from China, although Tiffany didn’t offer a specific number.

The weakness of the yuan compared with the US dollar is making travel and shopping less and less affordable for Chinese consumers in particular (at the end of August, the value of the yuan hit its lowest level in 11 years). 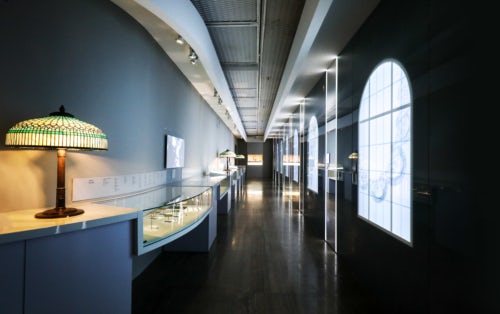 While overseas Chinese travel retail spend has long been important to the luxury industry, it is now clear that it is critical. According to a white paper issued by iClick, Ctrip and The Moodie Davitt Report in July, shopping by Chinese travellers accounts for 21 percent of the total global tourist spend, and the average spent per traveller is twice that of US or UK tourists.

Valued at $258 billion annually, they are “the biggest spenders in the world” parting with nearly 25 percent of their total expenditure on shopping when abroad, more than is spent even on accommodation.

Meeting Consumers Where They Are

One bright spot in Tiffany’s recent quarterly earnings has been the re-shoring of Chinese consumer spend on the mainland, where the brand has posted 25 percent growth, driven jointly by external factors like trade tensions with the US and unrest in Hong Kong, as well as the promotion of domestic consumption from the government in Beijing.

The focus, then for Bogliolo and Tiffany, is to meet Chinese consumers wherever they are. To do this, they are deploying a four-point China plan focused on flagships, travel retail, digital and customer experience.

To meet consumers online, Tiffany has recently signed on with Alibaba’s Tmall Luxury Pavilion platform and activated e-commerce on its own China site.

Although the brand has consistently rated highly in Gartner L2’s Digital IQ Index for luxury brands in China (it ranked 6th in this year’s survey) for its investment in digital messaging and strong campaigns led by celebrity ambassadors such as Du Jiang and Huo Siyan, e-commerce was not a significant part of their China strategy until this year.

[The trade war] has affected the profit margin, but I think what is important is to grow a market for the long term.

“This move to e-commerce has fuelled Tiffany’s recent growth and should continue to do so,” said Michael Zakkour, vice president, Tompkins International and co-author of “New Retail: Born in China, Going Global.”

A travel retail refocus will also be an important pillar of Tiffany’s China-centred business moving forward, by opening a major new store in Beijing airport and re-opening its Hong Kong airport store in a new location. An expansion of the Beijing strategy would insulate the brand somewhat from the whims of Chinese travellers — no matter where they end up travelling to, they first need to pass through a local airport to get there.

When asked about the biggest misstep Tiffany has ever made in its China strategy, Bogliolo points to the company’s tentative steps into the China market, via a single store at Beijing’s Peninsula Hotel, in the early 2000s, as being a limiting factor in optimising the brand’s potential in the market in the early days of the country’s luxury boom. 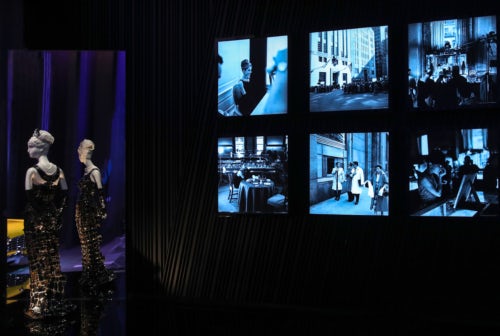 The "Breakfast at Tiffanys" room at the Vision and Virtuosity exhibition | Source: Courtesy

Today, the brand boasts 34 brick and mortar stores in 22 cities around mainland China, about the right total number for Tiffany, according to the CEO, though a great deal of investment has been set aside for store revamps and relocations.

This store network is in line with competitors like the 34 brick and mortar stores currently operated by Richemont’s Cartier and the 30 China stores boasted by LVMH-owned Bulgari, which rolled out its own Bulgari.cn e-commerce enabled site last year. All are dwarfed by regional jewellery powerhouses, such as Chow Tai Fook, which has thousands of doors and counters across China.

Earlier this year, Cartier partnered with one of China’s premier cultural institutions, the Palace Museum in Beijing, for an exhibit of more than 800 pieces that focused more on ancient Chinese culture and history, than it did on the brand’s own history and identity.

Tiffany has already relocated its Beijing flagship within the China World mall to a more prominent location, opened a major two-story flagship in Hong Kong’s Kowloon and, in December, will re-open a renovated Shanghai flagship. In Hong Kong and Shanghai, the first Blue Box cafes found outside New York are also set to open, another indication of the importance of not just being in the China market, but more deeply engaging and exciting customers there.

The brand is working with a solid foundation among China’s big-spending post-1990s generation, driven largely by the film "Breakfast at Tiffany's" and the brand’s affiliation with diamonds and “love” gifting. But Bogliolo believes a greater engagement with the DNA of the brand within China is key to the brand’s elevation from a jeweller with $4 billion-plus a year in revenue, to one boasting significantly more.

“If you look at the millennial consumers in China [this fits with their lifestyle as] they want things to be straightforward and without fluff,” he said.

The future of Tiffany’s growth in Asia depends on it.