The show lured showgoers from the main fashion week venues, drawing the likes of Vogue China Editor-in-Chief Angelica Cheung and celebrities such as actor Hu Bing.

Overnight, the Serpentine’s North Gallery was transformed into a wilder, overgrown scene, in sharp contrast to the pristine grounds lying mere meters away (the process involved some 300 pots of flowers and branches foraged from the park itself). Amid dried leaves and budding flowers stood the models, dishevelled hair piled atop their heads in a reference to the qitou headdresses sported by noble women in China’s Qing Dynasty. 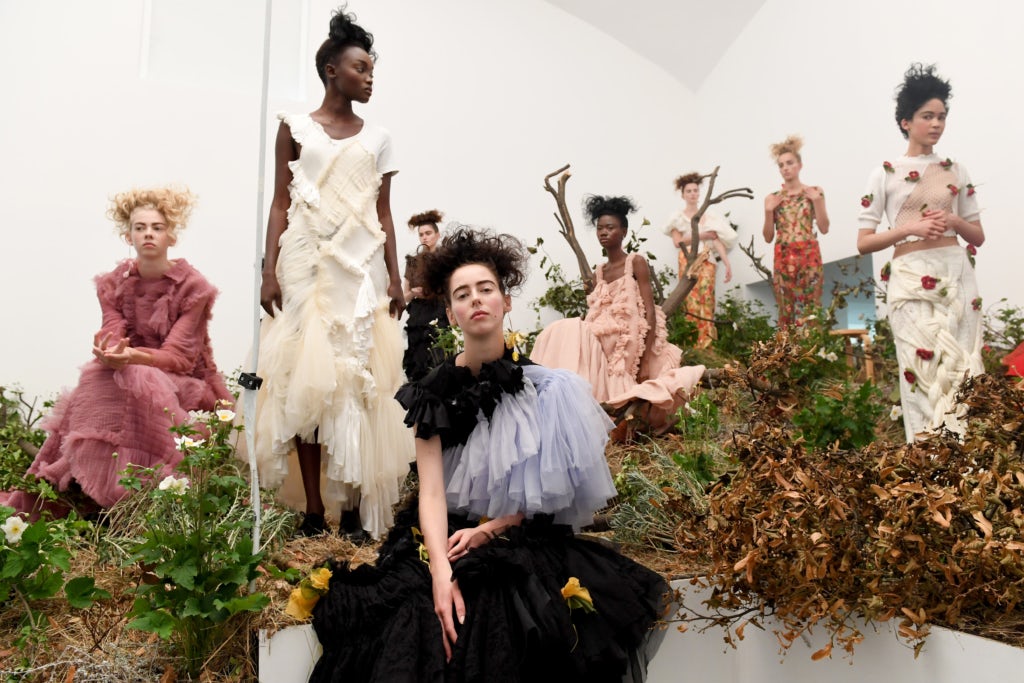 For Hu, this season’s inspiration was personal. “The collection is about my own love story with my husband, who I haven’t seen in more than eight months,” she told BoF. “Because of work and the distance, passion takes on a different tone — the warmth is still there but the love feels less defined, impressionist in a way.”

The collection provided a breath of life to Hu’s scene of decay and rebirth. There were continuations of the Shenzhen-born designer’s now-signature style, which features elements of both couture and ready-to-wear: one dress was smocked with tulle and scraps of fabric in autumnal strokes of amber, ochre and tangerine, another all-white number attached to a classic T-shirt. Other renditions incorporated yellow gingham, periwinkle and black (strewn with loose golden threads), asymmetric hemlines balanced by a single shoulder of tiered tulle or a puffed golden sleeve. 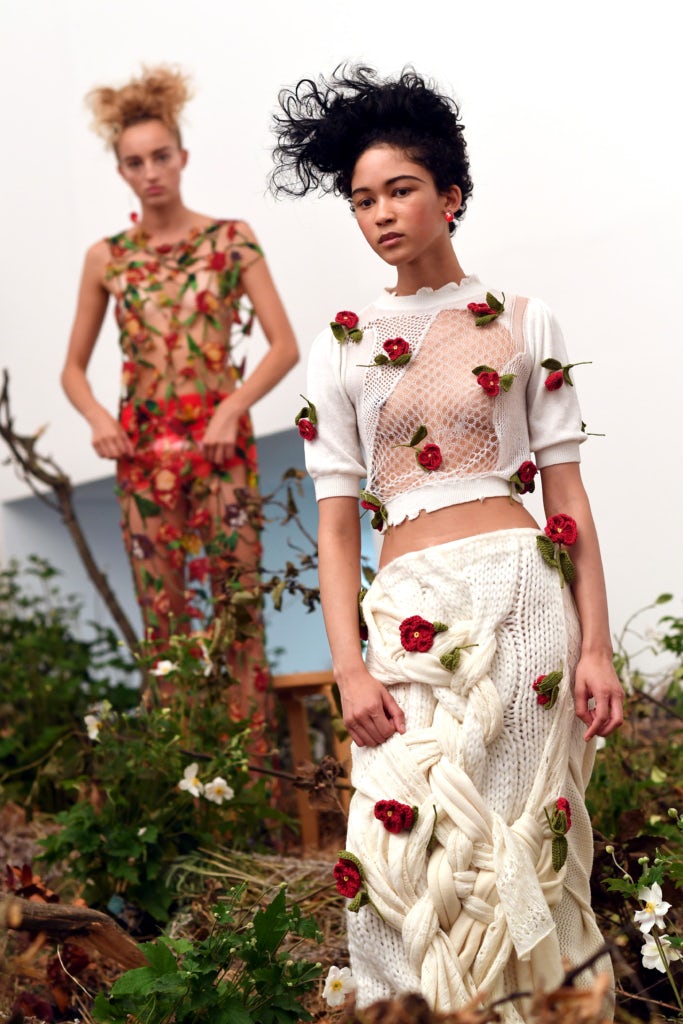 “It’s a very beautiful immersion into Caroline’s fairytale world,” said BoF’s Founder and Chief Executive Imran Amed. “You just get the sense that she’s starting to expand her creativity...when we first encountered her, she had six dresses, and I get the feeling that she’s in the midst of finding her creative voice, and it’s beautiful.”

New techniques and silhouettes pervaded the remainder of the collection, aptly called “Impressions of Love.” On one model, a cream midriff-baring ensemble dotted with red crochet flowers paired a chunky braided knit skirt with a knit top so fine it resembled sheer lace. Flowers re-appeared on a hand-painted skirt, which accompanied a white, puff-sleeved top that, while worn, one would swear was wind-swept.

To friends and BoF China Prize jurors Susanna Lau and consultant Julie Gilhart, Hu’s growth is palpable. “You’re always looking for progression,” says Gilhart upon arriving at the presentation. “She had a signature from the get-go and she’s expanded on the signature from a perspective of business and creativity.”

I’m determined to make what I want to make, and see how the market reacts.

The collection’s blurry tulle silhouettes and emotive hues — aloof blues scattered amongst warm golden tones, with the scene-stealing red crescendo — capture this sense sentiment. As the likes of British Fashion Council Chief Executive Caroline Rush and stylist Elizabeth Saltzman milled about the gallery, guests were given an intimate look into Hu’s storybook, hundreds of hours’ worth of craftsmanship in the making.

Seven months ago, Hu beat five other emerging Chinese fashion designers and design duos to win the BoF China Prize, encompassing $100,000, industry mentorship and an official show slot on this season’s London Fashion Week. In July, the prize brought Hu to Paris to meet the fashion community at the Ritz when she presented there during the couture shows. 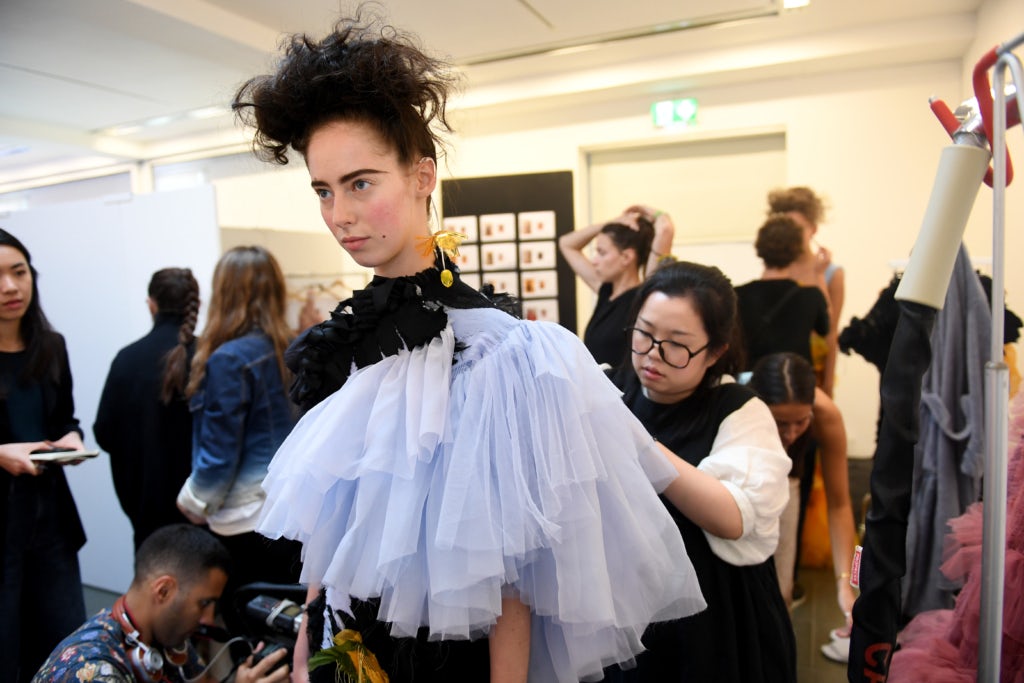 Caroline Hu and a model backstage at her Spring/Summer 2020 presentation | Source: Getty Images for The Business of Fashion

Throughout the entire prize journey she has worked in a state of flux — visa issues meant relocating from New York to Shanghai. In spite of this, Hu’s vision for her brand, its consumer and place in the market has become more fully formed, due in part to a bevy of mentors she will continue to work with in years to come, many of whom came to celebrate her achievements at an intimate dinner at Brasserie of Light the night before.

“From people like Olya [Kuryshchuk of publication 1 Granary] and Edison [Chen of streetwear brand Clot], I’ve learnt about how the industry works, and everyone gets it done in different ways,” Hu said. Yu Holdings Founder Wendy Yu and President of Hong Kong-based retailers Lane Crawford and Joyce Andrew Keith have also been staunch supporters of Hu and her vision, having respectively ordered a custom gown and given her advice on everything from sales to marketing.

Amid the simultaneous support and pressure stemming from Hu’s win in Shanghai, BoF China Prize jurors and mentors made it a priority to empower Hu as a designer and business leader. “When you’re doing an on-schedule presentation at a major fashion week, it creates a new level of expectation,” Amed added. “But throughout the whole journey, we encouraged her to make the decisions she was comfortable with as it’s her business and her creative vision. We’re just here to help facilitate it.” 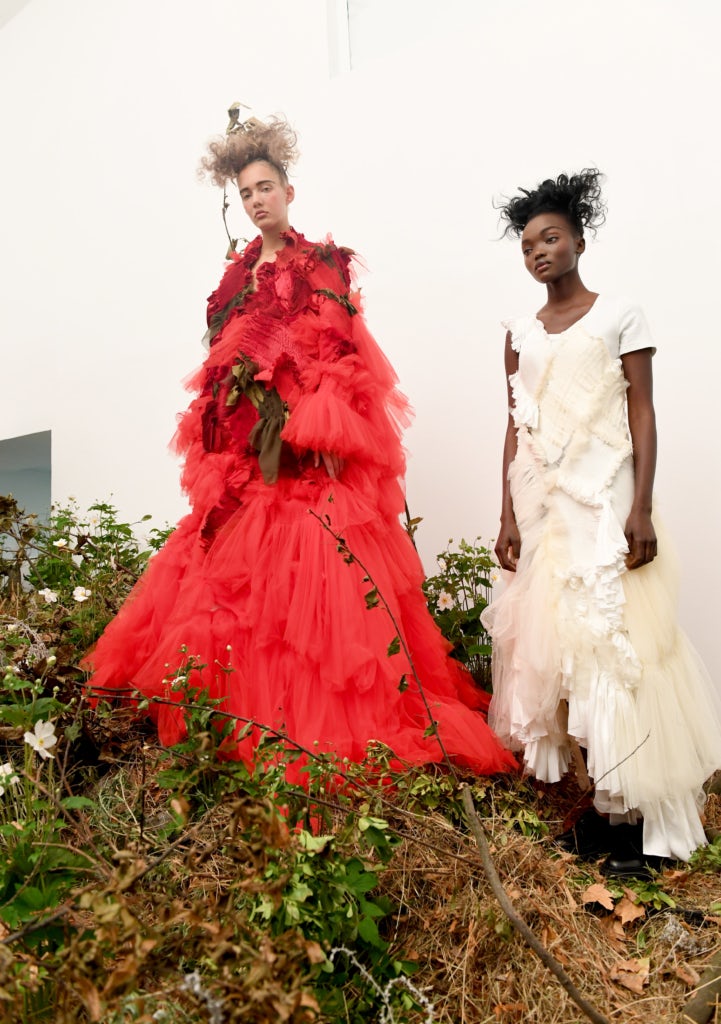 This latest collection is evidence of the prize support coming to fruition. “When people say I have to create a commercial brand to survive or I have to focus on couture, I’m determined to make what I want to make, and see how the market reacts,” said Hu. She recently found a factory that will enable her to fulfil orders from retailers, while buyers will also be able to place orders at Paris' Child Showroom, organised by 1 Granary and 247 Showroom to coincide with Paris Fashion Week.

The fact that Hu has brokered this deal while retaining her dedication and meticulous approach to construction is impressive. “It’s amazing how much advice from the industry and the BoF China Prize she’s taken on board, in terms of balancing her innate aesthetic and hours of hand sewing with an eye on commercial viability,” echoed Lau. “There are separates and pieces that are more digestible, and maybe not as grand, but which retain her essence.”

Looking forward, Hu says she has big plans for the months ahead, which remain secret for now. But with a heightened sense of self-awareness and perfectionism (qualities recognisable among budding talents and established masters alike), this conclusion to Hu’s BoF China Prize journey brings both satisfaction and excitement for the future.