SHANGHAI, China — When you’re slated to introduce your brand to a judging panel of fashion industry stalwarts and $100,000 is at stake, falling ill and losing your voice isn’t ideal.

Such was the fate of Caroline Hu on March 29, as six finalists geared up to compete for the inaugural BoF China Prize, in partnership with Yu Holdings. But following a five-minute visual introduction of her one-year-old label, the bespeckled Shenzhen native — soft-spoken even in the peak of good health — impressed the likes of Labelhood’s Tasha Liu, OTB’s Renzo Rosso and Clot’s Edison Chen with her thoughtful responses and strong creative voice.

“I was in a total daze,” says Hu, recounting the moment she took to the stage alongside BoF’s own Imran Amed and prize partner Yu Holding’s Wendy Yu at the BoF China Prize public showcase to accept the award.

“I was talking to my assistant about the finalists I thought had the best chance of winning when my name was called. It’s pretty obvious in the photos, that’s the face of someone in shock,” the New York-based designer adds. 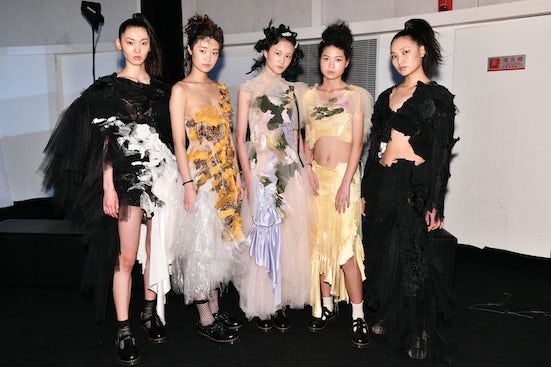 Alongside the five other finalists Pronounce, Xu Zhi, Shuting Qiu, PH5 and Staffonly, Hu was sure that judges would deem her namesake brand too young, or her $5,000 indulgently hand-crafted couture collection — voluminous realisations of oil paintings of which only five were sold to private clients — commercially impractical. Little did she know that those were the very reasons judges found her brand exciting and refreshing.

“Her soulful presentation just blew all of us away,” prize juror and fashion consultant Julie Gilhart tells BoF. “There was a beauty and sophistication in her work that is rare to see in such a young designer.” It wasn’t the first time Gilhart had seen the five looks Hu handpicked for her showcase from her first ever (and only) collection. Since encountering Hu’s MFA graduate collection at the Parsons School of Design (after a BA in womenswear from Central Saint Martins), Gilhart had followed the designer’s growth with a keen eye but was still struck by the raw yet sophisticated romanticism evoked by Hu’s creations.

Other jurors were drawn to Caroline’s artistry. “At a time when so much of fashion has been about products, it was really nice to see someone going back to craft and design and creativity,” says Imran Amed, BoF’s founder and editor-in-chief. “The industry has been so focused on streetwear, so it was a real counterpoint. For everyone at that table, it felt like the right moment to be backing a designer going back to first principles.”

Having also been shortlisted for this year’s LVMH Prize, it is no surprise that insiders in New York, Paris and Shanghai were already tuned into Hu’s tableau of modern femininity. Slivers of pink and green along the neckline of a pastel yellow ensemble recall Monet’s Water Lilies, while tufts of tulle cascade alongside painstakingly smocked strokes of lace and silk, forming a vibrant textural “camouflage.” Navel-baring, deconstructed silhouettes made the pieces more covetable, less Versailles excess. 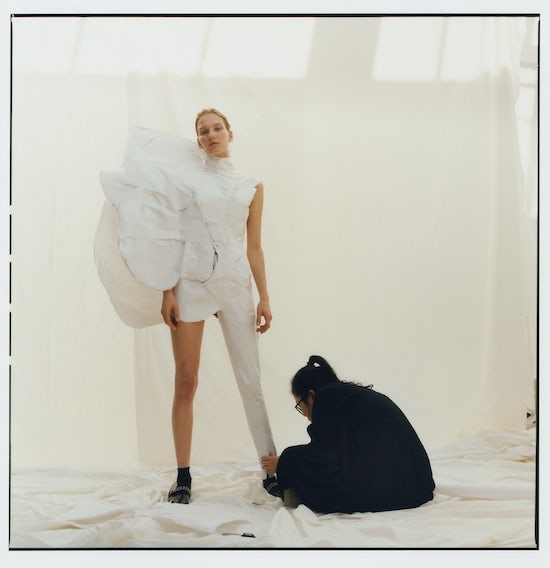 Her complex signature is the product of hundreds of hours (Hu’s more colourful creations can take a week to execute when she’s working alone) of solitary work and an instinctual eye. “I tend to know the feeling I want to capture, and draw it out until it feels right,” says Hu. “I’m always gradually digging out the feelings as the process goes on...that’s the only way you end up with surprises.”

The designer works as a one-woman team, save for the few student interns she welcomes when working on a collection. “I never ask other designers for advice and I’ve always been my only support...it gets lonely sometimes, but I enjoy it. Only then can I be free to design things how I like.”

Hu doesn’t deny the fact that building a business around an emotionally-driven, ad hoc process is hard to scale into ready-to-wear – or that broadening the scope of her couture offerings will be her biggest obstacle. However, she welcomes the challenge and is adamant that the brand will go commercial when she’s ready and as demand grows. “Production will grow and a team will eventually come into the picture, but when I’m designing I try not to interrupt the flow,” she continues.

When asked for the best advice she was given by the prize jurors, Hu replies, “They gave me the confidence to define what commerciality means to me. I think that commerciality isn’t objective and doesn’t need to have a sleeve or collar. Art can be commercial, too.”

Labelhood’s founder Tasha Liu recalled that when another juror suggested that Hu focus on costume design, the designer firmly declined. “She was adamant that she wanted her clothes to be worn by everyday women,” says Liu, who reckons that Hu’s pieces would be extremely popular among China’s younger female consumers.

“Hearing this and seeing her meticulously put together presentation at Labelhood where her dresses were styled with Converse sneakers, I realised she wanted her art to be available to the masses and not the elite. I admire that a lot.

Hu’s recent experience in Shanghai affirmed the value she placed in design for design’s sake. “[The jurors] saw me as a designer first and foremost and told me that my talent was worth protecting.” Though Hu admits she needs to work on her organisational skills and social media doesn’t come naturally to her (“I have to force myself to post on Instagram”), she welcomes a set-up where she can focus wholeheartedly on design. “A designer can’t always handle everything,” she says. “I need to protect that part of my brain!”

With mentorship from the prize jurors and the BoF community, Hu has reconsidered her entire business plan. “Without the BoF China Prize, I didn’t know whether I’d be able to do another season. Since I began my fashion education nine years ago, my family didn’t approve of the risk I was taking and thought I should work at a big company.” It is the reason Hu brought her parents to Shanghai for the event — Mrs. Hu had moved to the front of the crowd to snap photos of her daughter holding the prize cup. “I wanted to prove that I’m sticking with this choice I made. Now they understand, and it made me so happy to have [their] support.”

And though she still hasn’t planned exactly how she’ll be using the $100,000 cash prize to grow her business, Hu’s resilience — a stamina borne of being underfunded yet refusing to accede to the fast-pace of industry demands— won’t slip into complacency anytime soon. “I want to make the most out of the least amount of money,” she says, mapping out her rough plan for the year ahead: two shows, production costs and perhaps a studio manager hire. “I’ve made it through financially tough times, so I know I can still make do for a while.” 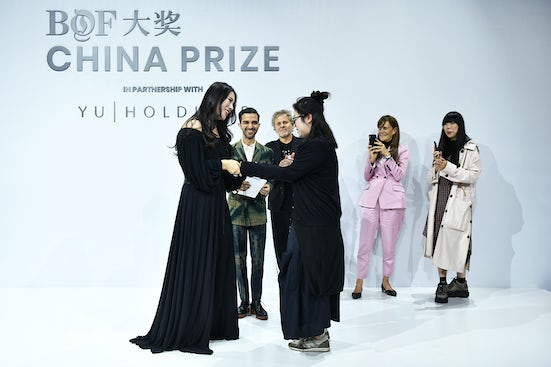 The media attention and orders that have come in post-BoF China Prize would overwhelm many young talents, but Hu seems unfazed and realistic, while noting that Dover Street Market would be her dream stockist. “I’m cautious about who I speak to as I don’t have the capacity to produce much yet.” As of now, she’s considering leaving her Autumn/Winter 2019 collection with 1Granary, who will also handle press for the brand while she works on her next collection, an abstract illustration of her own love story with her husband, who she’s been with for a decade.

Looking ahead, Hu’s goals are simple but ambitious. “I want Caroline Hu to become a brand that excites people before new collections are launched,” she says, raising John Galliano’s Maison Margiela as a personal inspiration. “If my brand sells and generates that anticipation while preserving my passion for design, I would be very content.”

Clearly, Hu’s business is in its earliest stage. Even with the $100,000 cash prize, a London Fashion Week showcase in September, and her strong design voice leading the way, other obstacles will test her stamina.

“It was a bold move to choose her, but also quite great to recognise someone so special,” says Gilhart, now one of the many mentors who will give Hu the support she needs to carve out her spot in the fashion industry. “Caroline is like opening a great book for the first time and reading one page at a time.”