Some Chinese factories are producing own-label products that bear a strong resemblance to the products they make for global luxury companies.

HONG KONG, China — The economic progression from ‘Made in China’ to ‘Designed in China’ is gathering pace, but manufacturing is still much more important to the country’s balance sheet than its nascent creative economy.

In recent years, China’s manufacturing sector has taken a hit due to a slowdown in global demand and the migration to cheaper sourcing centres across South East Asia. With a highly skilled workforce and not enough work, some factory owners that supply major luxury companies have decided that the solution now lies in creating brands of their own.

Most of these factory brands are not in the business of yuandan, the high-quality ‘factory extra’ replicas recently cited by Alibaba’s chairman Jack Ma as fakes that are so good, they are better than genuine luxury goods in a controversial interview. However, there are some instances where Chinese factories produce branded goods that bear a strong resemblance to products they already make for their Western clients. And sometimes tracing the origin of these brands can lead to a rather murky trail.

“They’re making this kind of move to protect themselves,” says Gerhard Flatz, the managing director of KTC, a manufacturer of premium sportswear in China. “Manufacturing is moving elsewhere, so in order to survive the factories feel they have to do something different. Sure, it’s a tricky business practice but factories are in a difficult position. There’s a war out there and they have nothing to lose.”

Building brands of their own

Take Tuscan’s, a leather-goods brand produced by Sitoy, a handbag factory located in China’s Guangdong province that produces for the likes of Michael Kors, Prada and Tumi. Tuscan’s is marketed as a brand with roots in Florence, Italy but since Sitoy owns a license for the trademark rights in virtually every major global fashion market outside Europe, it has operated much like a Chinese brand for the past five years.

Sitoy now designs Tuscan’s bags from their manufacturing complex in Dongguan and presides over a vast retail network of monobrand boutiques and department store counters around China from as far as Chongqing to Ningbo. The bags themselves are of a high quality considering their relatively low price (around $150 compared to at least $1,500 for an equivalent designer bag) and are clearly branded as Tuscan’s products. But similarities between some of their models and those of global brands are not uncommon. For example, the brand’s ‘Gem’ style, a stiff, square-shaped, top handle bag with a pocket flap, gold detailing and a leather and chain strap, echoes the shape and features of Michael Kors’ ‘Bridgette’ tote.

Factory brands diversify the business and move it up the value chain. 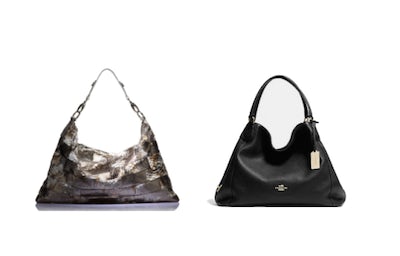 A rather different example can be seen through CocoMojo, a young accessories brand headquartered in Hong Kong. CocoMojo is overseen by Wendy Mak, the daughter of an important player in the Chinese manufacturing industry. Their business is a generations-old leather factory in the Pearl River Delta, which has produced for Marc Jacobs, Prada and Coach over the years. While often rendered in bright, marbled leathers and shiny, multi-coloured skins, CocoMojo’s silhouettes can bear striking similarities to the classic styles of famous luxury brands — such as Coach’s ‘Edie’ slouchy shoulder bag. Unlike Tuscan’s, CocoMojo appears to be a small scale personal project for Wendy Mak, who will most likely inherit her father’s empire one day. Nevertheless, if successful, it is a way for her to diversify the family business and move it up the value chain.

However, despite some instances of derivative designs in both of these factory brands, they are not much different than the ‘get-the-look-for-cheap’ designs produced by Europe’s major high street brands that echo luxury brand collections — and which occasionally fall foul of outright copycatting. After all, both business models underscore the various interpretations of design integrity that exists along a spectrum from original to inspired and subtly derivative design, and from blatant knock-offs to copycatting and counterfeiting.

But when similar designs are being churned out under a local label by the very same factory or manufacturer of a global brand, should Western companies take umbrage with the fact that their manufacturing partners are producing brands that might directly undercut their business? Or is it easy for them to ignore the issue because factory brands serve a niche of clients who can’t afford top tier luxury goods and who are generally less interested in yuandan replicas?

So long as the factory brand’s designs don’t legally infringe on those of the client, many European and American brands appear to turn a blind eye to what is technically a legitimate business. Yet many believe that, in private, luxury brand executives are simmering with frustration at the proliferation of knock-off styles produced by Chinese and other manufacturers.

“Essentially, labels are most worried about brand dilution as iconic bag styles are a form of branding in themselves,” says Liz Flora, the editor-in-chief of Jing Daily, who published the seminal report “China's Online Gray Market and Counterfeits” earlier this year. “Although some top brands like Hermès are immune to this so far. There are off-brand Birkin-style handbags all over Taobao but [on the other hand] we just saw the world-record price set for a [genuine] Birkin at auction in Hong Kong.”

Other industry figures have more sympathy for factory brands. Some simply view the phenomenon as a natural and clever response to boost profit margins in a cutthroat and fast-changing market.

“All companies need to consider how they will sustain and grow in the future,” says Jason Leung, a London-based director of sales agency The Alphabet, who has liaised with manufacturers in Greater China. “I’ve come across factories in China that produce for global luxury brands and also have their own label, typically for the domestic market in China [but] creating their own brands can allow for closer control of their revenue [because] if they are reliant on just one or two major luxury brands, their business is very much in the hands of that brand.”

This uncertainty is why many major Chinese textile and apparel factories appear to be transitioning from original equipment manufacturers (OEMs), which means they produce already-designed products or components of products for other companies, to original design manufacturers (ODMs), where they take the entire design process in-house.

In their new capacity as ODMs, some factories are trying a different approach to Sitoy and Simone. Instead of creating and marketing brands of their own, they design and produce entire collections to sell to other companies, who then stamp their own label to the goods prior to retail sale. A well-known and fast growing phenomenon in the industry, it is now referred to as white-label strategy.

“I was at trade show for Hong Kong Fashion Week and I was surprised to see that instead of creative new designers taking booths, it was all Chinese factories with lines to sell. These were collections designed in factories that had previously only produced clothes for global brands,” says Susanna Soo, the Hong Kong-based owner of fashion brand S.Nine. “I was actually very impressed by the high quality of the design and the products they had on offer. And I can understand why factories are taking this step, as from what I have heard, things are getting very difficult for them.”

A fast growing phenomenon in the industry is white-label strategy.

Rising costs are the main contributor. According to the Boston Consulting Group, wages in China have almost tripled over the last decade, and this, combined with higher energy bills and increasing logistical costs, means local factories are becoming far less financially attractive than they once were. Both Western and Chinese brands are now turning to countries such as Bangladesh, India and Indonesia to have their goods made. On top of this, Chinese factories have also had to contend with a domestic and European slowdown of economic growth.

In a bid to improve their outgoings, some factories are now trying to get talented designers on the payroll. Fashion designer Li Na, who has shown at Mercedez-Benz China Fashion Week, has publicly spoken about being approached by a factory to create a branded collection for them. Traditionally a factory that only made pre-designed clothes for Western high-street brands, it is now trying to update its business model. During their conversation, the factory owners explained that they had felt pressure from the local community and, interestingly, from the government to produce a brand of their own with an original aesthetic, hence their interest in Li Na.

Opportunities to upskill and upgrade

Although it is tempting to have a knee-jerk negative reaction to the factory brand phenomenon, an increase in factory-owned brands could be beneficial not only to some end customers but to others in the industry. Copycatting remains a big problem in China’s manufacturing sector but if factories can move away from lazy design practices, then they could find themselves in an unexpectedly powerful position.

“Ultimately factories are in better position than most brands are,” says Flatz. “They have highly skilled workers and they know how to make products cheaply and well. This is why KTC is following a different strategy to before. We’re offloading certain brands and instead we’re teaming up with young designers. It’s the way forward.”

After years of conforming to the exacting standards of international brands, factories now have the chance to employ young Chinese designers, many of whom have been trained abroad, along with a strong marketing team to offer the potent combination of original, high-quality clothes and accessories at competitive prices.

Ultimately factories are in better position than most brands are.

However, it would be naive to think that the rise of factory brands is all about a creative, financially fruitful union. While this could work well in isolated cases, observers say that a more immediate solution would be for Western brands and Chinese factories to seriously examine their current working practices.

Jason Leung argues that personal relationships carry more weight when doing business in China than they do in the West, so if luxury brands nurtured these bonds and offered up more incentives or investment opportunities, then factory owners would feel less uncertain about the future. For it is uncertainty that is the root cause of this phenomenon.

“If you have a healthy relationship with the Chinese, they will give you the shirt off their back, but if you don’t, they will corner you,” says Flatz. “It’s as simple as that.”