SHANGHAI, China — High-tech automated convenience stores are infiltrating Beijing and Shanghai. One of them, BingoBox, launched in several neighbourhoods early this month, offering shelves lined with instant noodles, beer and traditional snacks. Inside there is also a microwave, a shared mobile phone charger, a freezer and a soy milk machine. But one thing is noticeably missing — the staff.

The convenience store, powered by WeChat, requires no checkout, no cash and no salespeople. Customers scan QR codes to enter the store and select products, and then pay using their mobile WeChat wallets. Sensors on the shelves detect the removal of items. Once an item has been removed, it is linked to the shopper’s unique ID in the smartphone app to prevent theft.

The government also requires “real name” registration for social media users, which helps to prevent fraud, while aiding the collection of valuable consumer data. After the shopper has completed payment, any information collected at the door is automatically deleted. Bingobox, the brainchild of Swedish start-up Wheelys, currently has a dozen unmanned shops in operation in China, and hundreds more planned.

BingoBox isn’t the first staff-less store to be introduced. Earlier this month, Alibaba launched Tao Café, its first cashier-less cafe, in Hangzhou, the capital of east China’s Zhejiang province, drawing queues of customers on the opening weekend. To enter and make a purchase, shoppers required only a smartphone with Alibaba's Taobao e-commerce app. The café uses facial and voice recognition systems to track purchases, and the system is able to automatically generate bills as soon as customers pass through a gate that can identify them with biometric technology.

The rapid roll out of cash and staff-free stores in China has been made possible by the widespread use of mobile payments, which were 50 times greater in China than those in the US in 2016, according to market data. A recent report released by the UN’s Better Than Cash Alliance said that Chinese consumers processed a total of $3 trillion in transactions through Alipay and WeChat payment, up from about $81.6 billion in 2012. 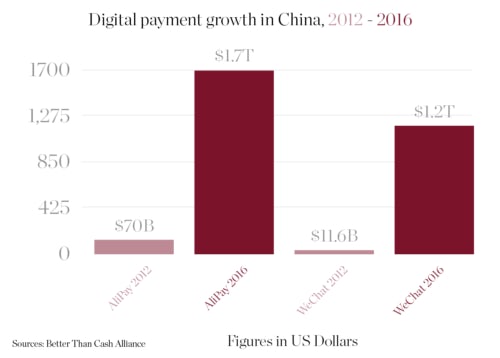 China is systematically and rapidly doing away with paper money and coins, and people in major Chinese cities are using their smartphones to pay for just about everything — to pay rent, buy groceries, donate to charity, install payments for sexual services, and more. Even buskers playing on the streets of a number of Chinese cities have put up boards with QR codes, so that passers-by can easily transfer them tips directly.

However, the implementations of these shops during the height of the summer heat hasn’t been without problems. With temperatures reaching over 40 degrees across China, several no-staff stores have had to close down, triggering debate around the buzz of these new retail formats. The question now on many people’s lips is whether the concept can work in the wider world beyond China? And can it work for fashion? Will we soon be able to pick up new clothes and walk out the store, automatically paying for them with our biometric information, without any human interaction?

The Amazon Go store, which currently has one location in Seattle, Washington inside the company’s headquarters, was initially slated to open to the public in early 2017. But this has not been the case; the store’s technology has reportedly experienced glitches when too many people are in the store at once.

Zara has introduced self-checkout stations at a new 65,000-square-foot store in Madrid, its largest store in the world, which opened in April this year. The brand, which could not be reached for comment, has yet to confirm whether these developments will roll out at other locations.

In the luxury space, department stores Harrods, Selfridges and Galeries Lafayette began offering Alipay in 2016 and are among the first retailers to do so. But selling luxury brands is an entirely different proposition than high street fashion. Staff-less stores would seem counter to the very business model that anchors luxury with the highest levels of customer service.

“I always say ‘fashion isn’t downloadable’. You need the human element — a program or piece of technology won’t provide the full level of care, attention and assistance that a shop assistant or customer service team will give. This interaction and engagement is an essential component of providing a luxury experience,” José Neves, founder and chief executive of online marketplace Farfetch, recently told the Guardian. “On the other hand, you can’t ignore technology. To succeed we need to strike a balance between the online and offline experience.”

Gucci and Louis Vuitton launch e-commerce in China. Fans of luxury goods from China’s smaller cities will no longer have to travel long distances to buy the latest Louis Vuitton handbag, now that the brand has launched an e-commerce site in China, which will include leather goods, shoes, watches, jewellery, luggage and fragrance.

Louis Vuitton’s expansion into China is timely, as it enters a market where online shopping is rapidly becoming a way of life. Online sales now make up almost one-fifth of all retail spending in China, and the country is also set to overtake the US as the world's largest luxury goods market in the next four years, according to Euromonitor International.

This follows a similar move by Kering-owned Gucci, which last year shuttered its store on Alibaba Group’s Tmall and, this July, launched an e-commerce site catered to the Chinese market, offering full collections of handbags, shoes, jewellery and ready-to-wear.

However, both luxury brands will have to compete with domestic e-commerce pioneers like Alibaba and JD.com, both of which are chasing the luxury market aggressively: JD recently partnered with Farfetch in a $397 million deal while Alibaba is reported to be interested in taking a stake in Yoox Net-a-Porter.

Visa, MasterCard and American Express plans to enter China. Three leading US credit card companies are in the process of submitting license requests to operate in China, according to Reuters. But approval may take two years or longer as American companies must pass regulatory scrutiny, security standards and set up extensive local infrastructure, before they are permitted to operate in China.

China first agreed to open its card market to local and foreign businesses in 2015. The country is set to become the world’s largest bank card market by 2020, when cards in circulation are expected to increase to nine billion from six billion last year, according to research firm GlobalData. State-backed UnionPay, launched in 2002, currently dominates China’s card payment market.

However, there are concerns among foreign payment network operators about possible surveillance and the confidentiality of their data. Other industry insiders expressed concerns about whether China was providing a level playing field for foreign companies.

The plans by major global card companies to enter China comes at a time when Chinese consumers are increasingly turning to mobile online payments and money transfers using WeChat and Alipay, which has already caused a high adoption of services by domestic retailers.

While Alibaba’s court win is a breakthrough, there is still a long way to go as many copycat products – including fashion – continue to flourish as an essential, quasi-legitimate dimension of the Chinese economy. In January of this year, Alibaba filed a lawsuit against two merchants for selling fake Swarovski watches, asking for a compensation of 1.4 million RMB ($207,345).

The Chinese counterfeit industry costs foreign firms an estimated $20 billion a year in lost profits, according to Charles Scholz, Asia director for the security consulting firm, Kroll Associates, which works with international companies to root out and help shut down counterfeiters.

Such counterfeits have jeopardised Alibaba’s expansion into the luxury sector and many luxury brands view the group as part of the problem instead of the solution, even as Alibaba increases efforts to find and eliminate counterfeit goods.

For his part, Alibaba’s billionaire founder Jack Ma says that China’s weak laws are part of the problem: the Chinese government’s preferential policies and regulations to restrict market access by foreign companies and the lack of sophisticated IP protection give Chinese companies a home advantage to create copies.

How China Is Disrupting the ‘Wang Hong’ Influencer Economy
WhatsApp is the latest service to be disrupted by China’s digital clampdown, but commercially motivated changes to Sina Weibo could be even more damaging for the ‘internet celebrity’ influencer economy.

Alibaba Predicts Revenue Rise of 45 to 48 Percent in 2017
China's Alibaba expects its revenue to expand by 45 to 48 percent in its fiscal year from April as more small businesses join its online community in search of sales.

JD and Lazada Face Off in Indonesia, Asia's Next E-Commerce Prize
JD and Alibaba are betting that they can combine know-how and delivery skills learned during rapid growth in China. At stake is the future of e-commerce in a country of 261 million and a rapidly expanding middle class.

Sale of Next Digital Titles Sparks Concern Over Hong Kong Media Landscape
Next Digital's plans to sell five magazines raises concerns at a time when some believe the former British colony's press freedom has deteriorated.